Dan Lehv was named President of the Steel in August, 2015. Under his guidance, the Steel have increased their attendance in every season since moving to the Fox Valley Ice Arena in 2015 while expanding their business and hockey operations.  The turnaround on the ice has included the 2016-2017 Clark Cup Championship, the first in team history, two Eastern Conference titles, and the 2019-2020 Anderson Cup Championship - the USHL regular-season title.

Lehv was named the 2019-2020 Dave Tyler USHL Executive of the Year, becoming the only two-time recipient of the award following his 2012-2013 honor as President of the Dubuque Fighting Saints. Lehv joined the Steel after four successful years building the Fighting Saints, a highly respected member club of the USHL, after an eleven-year career in minor-league baseball. During his tenure as President of Dubuque, Dan established corporate and sponsor relationships, deepened the club’s ties to the local hockey and business communities and established Dubuque as a viable and sustainable long-term business franchise.

During his time in baseball, Lehv excelled in sales, marketing and media for the Goldklang Group, recognized as one of the premier ownership groups in baseball.  Lehv served as Assistant General Manager for the St. Paul Saints (American Association) and in media relations/broadcasting for the Charleston RiverDogs (South Atlantic League), helping to develop and implement some of the most innovative and memorable promotions in minor league baseball history.  Lehv was named South Atlantic League Media Relations Director of the Year in 2004.

Lehv currently serves on the USHL’s Executive Committee as well as the League’s Scheduling and Investment Advisory committees.  A graduate of the University of Michigan, Dan resides in Geneva with his wife, Jess, and children, Miriam and Ari.

Eric Olgaard joined the Steel prior to the 2018-2019 season. As part of his ticket sales responsibilities, Eric coordinates the team's Youth Hockey Experience program and works closely with the youth hockey community. A native of Bay City, Mich., Eric graduated from Concordia University Chicago where he majored in sports management. Prior to joining the Steel, Eric spent six years in hospitality where he specialized in group sales at three full-service hotels. Eric's sports industry experience includes time with the Saginaw Spirit Hockey Club focusing on marketing and game day operations, Octagon Baseball, and as a family advisor with GDA Hockey. Eric and his wife Brittney reside in Oak Park.

Kim Castellanos joined the Steel in 2015 and was hired full-time prior to the 2016-2017 season. She focuses on establishing and maintaining relationships with area schools and oversees the team's signature "Live Strong as Steel" assembly program and "Read with Rusty" reading program. In addition, Kim coordinates player, staff and mascot appearances throughout the area. She also manages the design, ordering and sale of Steel merchandise. Castellanos graduated from the University of Illinois with a degree in sport management. She previously interned for the Chicago Bandits and Joliet Slammers, focusing on in-game promotions and box office management. Kim resides in Lombard.

Chandra Chipner joined the Steel prior to the 2018-2019 season. She is responsible for the conceptualization and production of designed print and digital projects. Chandra attended the Cleveland Institute of Art and interned as a Graphic Designer with the Washington Spirit (NWSL). Since then, she has interned with the Chicago Red Stars (NWSL) and worked for the Chicago Fire (MLS) before starting with the Steel. She resides in the Lincoln Park neighborhood of Chicago.

Dan Vatch joined the Steel prior to the 2019-2020 season. He serves as the team’s primary media contact and oversees all team communications including press releases, the team’s social media platforms and website. Prior to joining the team, Vatch served as communications intern for the Colorado Avalanche during the 2018-19 season, media relations intern for the Chicago Blackhawks during the 2017-18 campaign and was a game-night media relations intern for the Blackhawks during 2016-17. The Elmhurst, Illinois native graduated from Loras College in Dubuque, Iowa with a degree in sport management where he played football and was a member of the track and field team for the Duhawks. Dan currently resides in Westmont.

Katie Sack joined the Steel in the 2003-2004 season as a game day intern. She oversees the planning and execution of game night promotions including theme nights, between periods and intermission promotions and other fun in-game activities designed to make the experience outstanding for all Steel fans

Born and raised in Plainfield, Ill., at the time she joined the Steel, Sack was working toward a degree in marketing at the University of Illinois at Chicago.

Mark Citron joined the Steel prior to the 2018-2019 season. He serves as “Voice of the Steel” for all home and road games. Prior to joining the Steel, Citron served as the Rinkside Reporter with the Chicago WolvesThe Pittsburgh, Penn. native studied Communications and Marketing at The University of Tampa. While there, he worked for the Tampa Bay Lightning Community Hockey Program and was the Tampa Bay Lightning High School Hockey League broadcaster for two seasons. 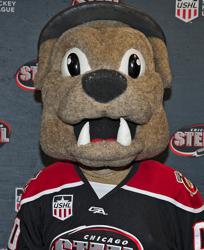