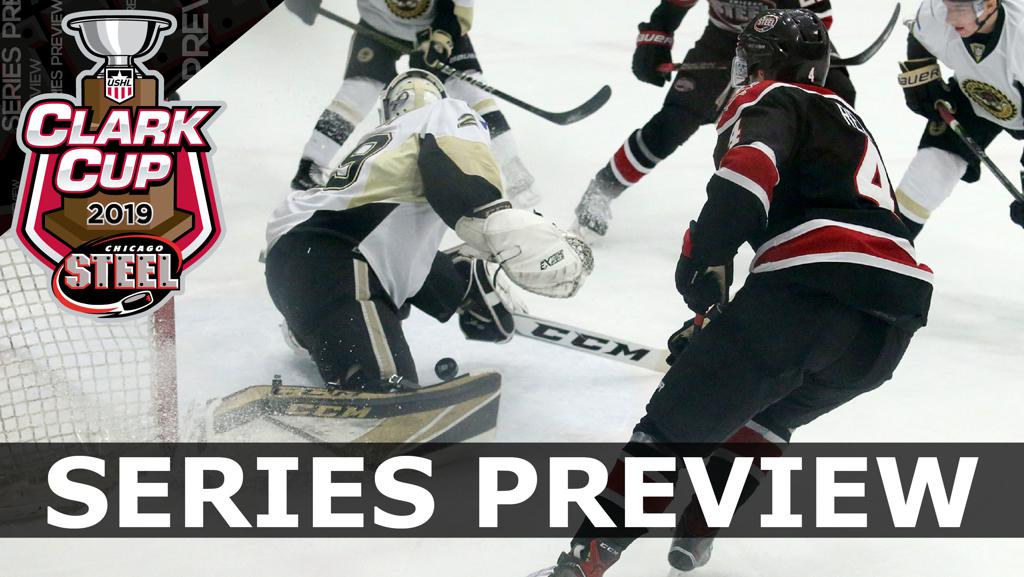 The series will be a rematch of last year’s best-of-three First Round matchup between Chicago and Muskegon, which the Steel won in Game 3 in an overtime thriller.

Both teams come into the Eastern Conference having won their respective Eastern Conference Semifinals matchup 3-games-to-1. Chicago ousted the Cedar Rapids RoughRiders in four games after winning Games 3 and 4 on the road at Cedar Rapids Ice Arena. Chicago won Game 1 handedly before dropping Game 2 in a thrilling overtime contest. The Steel then went on the road and outscored the RoughRiders 7-2 in Games 3 and 4 to close out the series.

Muskegon won Games 1 and 2 on home ice by a combined score of 9-1, but Dubuque answered back in Game 3 with a 5-1 drubbing at Mystique Ice Center. The Lumberjacks responded the next night with a tightly-contested 2-1 win in Game 4 to close out the series.

Chicago finished 2-4-0-0 against Muskegon during the regular season but both wins came in the final two meetings between the teams by a combined score of 14-2. Muskegon won the first four meetings of the season, with three of those decisions coming in Chicago’s first 11 games of the season.

Chicago’s first win of the season over Muskegon came by way of a 6-1 win on February 15 at Fox Valley Ice Arena. Forwards Nick Abruzzese (1-3-4) and Robert Mastrosimone (2-1-3) spurred the offense that night and have been two of the top scorers against the Lumberjacks this season. Abruzzese leads the Steel offense with 11 points (4-7-11) in six matchups while Mastrosimone is third with six points (3-3-6). Chicago defenseman Matteo Pietroniro has seven points (2-5-7) in the six meetings this season.

Abruzzese leads Chicago with nine points (3-6-9) this postseason, currently tied for the USHL lead. His six assists is second among USHL skaters in the postseason. Mastrosimone is second on the team and tied for fifth in the league with seven points (3-4-7) in four games.

The teams most recently met in the regular season finale on Saturday, April 13, an 8-1 Steel victory in a game in which Muskegon rested a majority of its top players having already secured the top seed in the East.

Muskegon has been paced offensively by forward Bobby Lynch who has seven points (3-4-7) in six meetings against Chicago this season. Defenseman Colby Bukes (0-5-5) and forwards Mikael Hakkarainen (2-3-5) and Egor Afanasyev (2-3-5) have all registered five points against the Steel.

Single game tickets for Steel home games during the Eastern Conference Final are on sale now and may be purchased in person at the Steel Box Office during normal business hours, by phone at 855-51-STEEL or online at ChicagoSteelHockeyTeam.com. Tickets start at just $10 and fans can catch the action up close with seats on the glass available for just $20. The group ticket minimum for Clark Cup Playoff games is just 10 people, and the Budweiser Lounge and Steel Suites are available for playoff games by calling 855-51-STEEL.

The Conference Semifinals victory over Cedar Rapids marks the third consecutive season in which the Steel have won a playoff series. All Steel games are broadcast live on HockeyTV (video) and mixlr.com/chicago-steel (free audio).

KEYS TO THE SERIES: