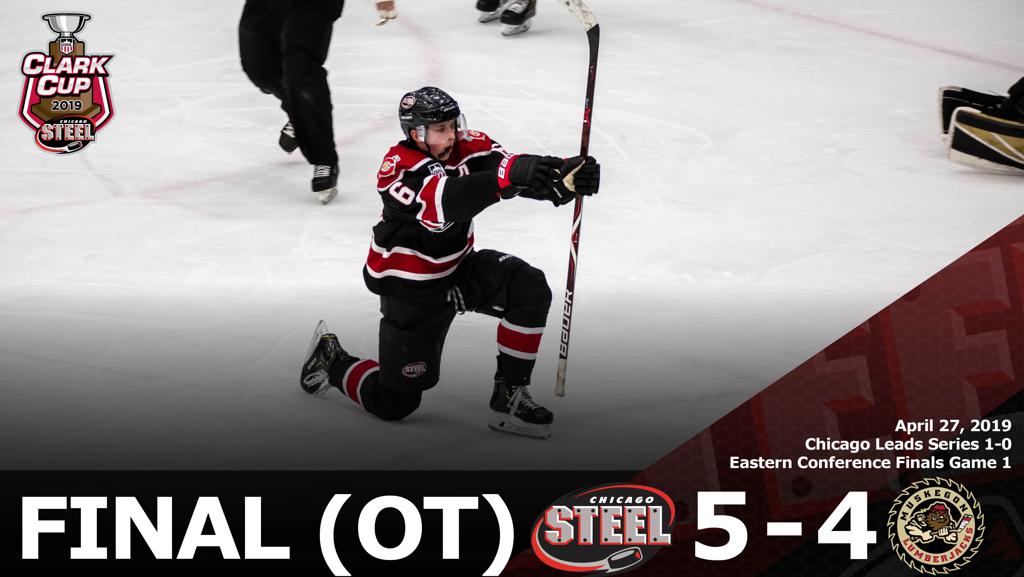 MUSKEGON, MICHIGAN — The Chicago Steel won Game 1 of the Eastern Conference Finals in thrilling fashion with a come-from-behind, 5-4 overtime win over the Muskegon Lumberjacks Saturday night at L.C. Walker Arena in Muskegon, Mich. Chicago never led until the end and center Josiah Slavin forced overtime with 2.9 seconds remaining before center Nick Abruzzese found the game-winning goal in the extra frame.

Abruzzese picked up his second goal of the night, and USHL-leading 10th point of the postseason, at the 5:16 mark of overtime. Steel right wing Robert Mastrosimone slung a pass across the offensive zone and through three skaters where it landed directly on Abruzzese’s tape to set up a wrist shot through the five-hole of Lumberjacks netminder Brandon Bussi.

The goal came after a wild end to regulation. With the Steel trialing 4-3, Chicago appeared to tie the game on a late powerplay with 1:46 to play as Abruzzese celebrated a would-be goal. But the referees deemed no goal on the play as the puck hit Abruzzese’s skate and the call on the ice of a kicking motion was upheld upon video review.

With regulation winding down, Slavin picked up his second goal of the game with 2.9 seconds remaining on the clock as he beat Bussi to the glove side to shock the Lumberjacks and force the extra frame. The Chicago Blackhawks prospect finished off a feed from Fontaine who found Slavin in the slot for the equalizing wrist shot.

The Steel played from behind after Muskegon opened the game’s scoring with a pair of five-on-three goals just 47 seconds apart late in the first period. After a high sticking double minor coupled with another high sticking call against the Steel, Lumberjacks forward Mikael Hakkarainen scored a pair of identical one-time slap shot goals from the side of the net to give his team a 2-0 lead after 20 minutes.

Chicago left wing Gunnarwolfe Fontaine cut the deficit in half just 66 seconds into the middle frame as the forward smacked a rebound past Bussi, who blocked the initial shot from Mastrosimone.

The teams then traded a pair of goals in quick succession seven minutes into the second. Lumberjacks forward Jagger Joshua added the team’s third powerplay goal of the night at the 7:03 mark, but Slavin cut the Muskegon lead in half just 41 seconds later. Slavin’s board battle started the play and the Chicago Blackhawks prospect found the net on a wrist shot that beat a screened Bussi.

Bussi and Chicago netminder Justin Robbins traded saves down the stretch of the second period to send the game into the final period 3-2.

Muskegon opened up another two-goal lead 2:41 into the third period as forward Bobby Lynch potted his second goal of the postseason, banking a puck off the body of a Steel defenseman into the cage. But it was Abruzzese who struck on a breakaway just 12 seconds later to draw the Steel within one for the third time in the game. Abruzzese was sprung on the breakaway by a two-line pass from defenseman Matteo Pietroniro and fired a wrist shot past the glove of Bussi for his fourth goal and ninth point of the postseason.

Robbins made 36 saves to keep the Steel in the game throughout, earning his fourth victory of the postseason.

The Steel and Lumberjacks are back in action Sunday at 4:15 p.m. CT for Game 2 of the Eastern Conference Finals as the Steel attempt to go up 2-0 in the best-of-five series before the series shifts to Chicago for Game 3 on Friday, May 3 at 7:05 p.m. at Fox Valley Ice Arena in Geneva.

Single game tickets for Steel home games during the Eastern Conference Final are on sale now and may be purchased in person at the Steel Box Office, by phone at 855-51-STEEL or online at ChicagoSteelHockeyTeam.com. Tickets start at just $10 and fans can catch the action up close with seats on the glass available for just $20. The group ticket minimum for Clark Cup Playoff games is just 10 people, and the Budweiser Lounge and Steel Suites are available for playoff games by calling 855-51-STEEL.