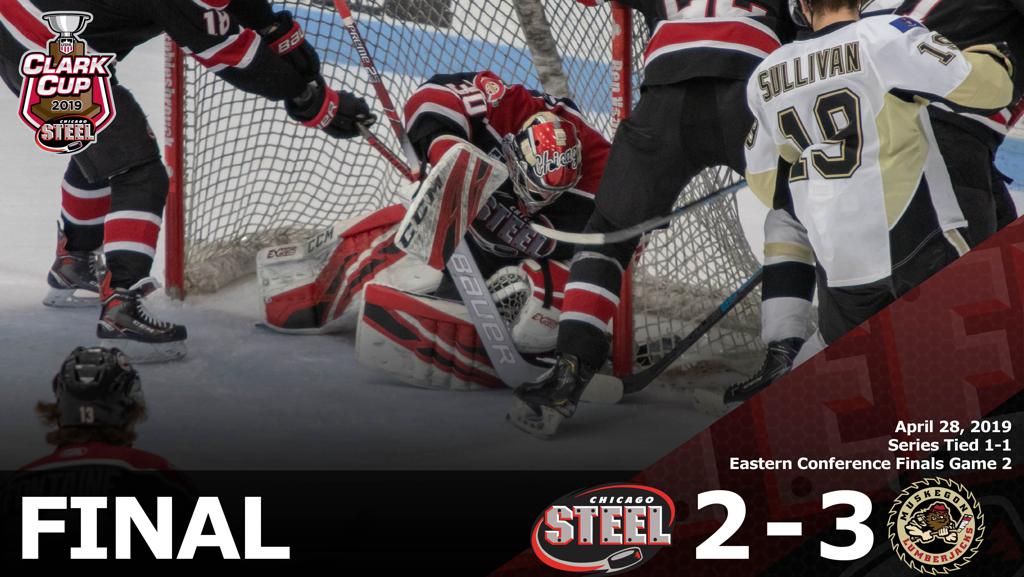 MUSKEGON, MICHIGAN — In nearly a mirror image of Saturday’s Game 1, the Chicago Steel trailed almost all of Sunday night’s Game 2 of the Eastern Conference Final, but this time couldn’t pull off a last-minute comeback, falling to the Muskegon Lumberjacks 3-2 at L.C. Walker Arena. The best-of-five series is now tied 1-1 heading back to Games 3 and 4 at Fox Valley Ice Arena in Geneva next weekend.

In what their head coach deemed a “must-win game" for Muskegon, the Lumberjacks grabbed the lead moments into the first period as forward Jagger Joshua struck for his fourth of the postseason just 19 seconds in as he tapped home a feed from forward Ryan Savage past Steel netminder Justin Robbins.

Steel forward Robert Mastrosimone evened the score midway through the opening period as he one-timed home a feed from center Josiah Slavin that found room through Lumberjacks goaltender Brandon Bussi. The play came immediately after a powerplay opportunity for the Steel that generated multiple chances that Bussi turned aside.

Muskegon regained the lead with 6:59 to play in the first as forward Mikael Hakkarainen scored his third goal of the series when he sent home a rebound past the right pad of Robbins. The Steel netminder made the initial save on a slot shot from Max Ellis but Hakkarainen was posted at the side of the net and poked the rebound into the back of the cage.

Bussi kept Muskegon ahead by one late in the first period as he denied Slavin on a net-front chance and then denied Slavin’s follow-up chance while on his side.

The Lumberjacks opened up the first two-goal difference of the game just 94 seconds into the second period when forward Jack Williams tapped home a perfect feed from defenseman Colby Bukes. Williams, who was perched in the slot, tapped home a feed from Bukes past Robbins, who was in position for the fake shot by Bukes shot from the bottom of the faceoff circle.

Bussi again bailed out the Muskegon defense as he made a sprawling, sliding save on Steel defenseman Jimmy Dowd with 4:35 to play in the middle frame. Dowd came streaking in unmanned and pulled a forehand-backhand move on Bussi who stopped him with the glove at the last moment as he was sliding across the ice. Less than a minute later, Bussi denied Mastrosimone on a breakaway with his left pad to keep Muskegon up 3-1 through two periods.

Chicago finally found room past Bussi early in the third period on the powerplay as left wing Gunnarwolfe Fontaine lasered a wrist shot over the shoulder of Bussi from a tight angle to bring the Steel within one with 19:38 to play.

The Steel couldn’t find the equalizer even with an extra attack for the final two minutes of the game. Bussi turned aside five shots in the third to secure the Game 2 win for Muskegon. Robbins finished with 28 saves for Chicago who were outshot 31-26 in the contest.

Single game tickets for both games are on sale now and may be purchased in person at the Steel Box Office, by phone at 855-51-STEEL or online at ChicagoSteelHockeyTeam.com. Tickets start at just $10 and fans can catch the action up close with seats on the glass available for just $20. The group ticket minimum for Clark Cup Playoff games is just 10 people, and the Budweiser Lounge and Steel Suites are available for playoff games by calling 855-51-STEEL.