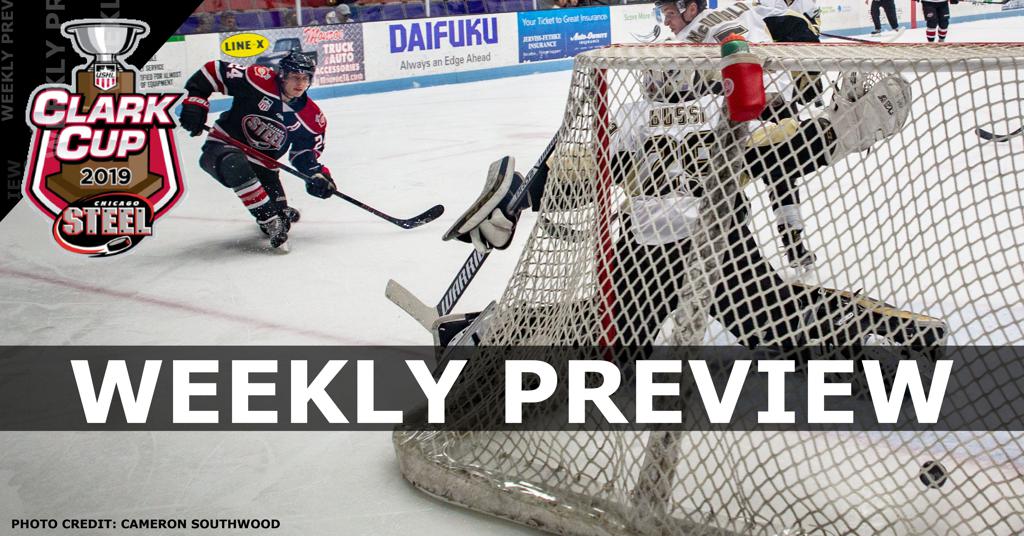 GENEVA, ILLINOIS — After two exciting and evenly-matched games, the best-of-five Eastern Conference Final between the Chicago Steel and Muskegon Lumberjacks now shifts to Fox Valley Ice Arena for Game 3 and Game 4 on Friday and Saturday night in Geneva.

The series has been very competitive with a pair of one-goal games deciding the first two meetings. In Game 1, the Lumberjacks led by two goals three different times but Chicago scored the final three goals of the game, including center Nick Abruzzese’s overtime game winner to take the first game of the series. Center Josiah Slavin tied the game and forced overtime with just 2.9 seconds remaining in regulation. Both Abruzzese and Slavin scored a pair of goals in the contest while defenseman Matteo Pietroniro chipped in a trio of assists.

Game 2 was much the same as Chicago again played from behind for the majority of the game. Steel right wing Robert Mastrosimone leveled the score midway through the first period after the Lumberjacks opened the scoring 19 seconds into the game. Muskegon then struck later in the first and early in the second to open a 3-1 lead. Chicago left wing Gunnarwolfe Fontaine scored 22 seconds into the third to make it a one-goal game but Muskegon goaltender Brandon Bussi shut down the Steel comeback attempt as the Lumberjacks leveled the series heading to Chicago.

The teams met three times at Fox Valley Ice Arena during the regular season with Muskegon capturing two early-season wins (Oct. 19 and Nov. 3) before Chicago broke through with a 6-1 win on February 15. Abruzzese (1-3-4) and Mastrosimone (2-1-3) led the offense that night.

Single game tickets for Steel home games during the Eastern Conference Final are on sale now and may be purchased in person at the Steel Box Office during normal business hours, by phone at 855-51-STEEL or online at ChicagoSteelHockeyTeam.com. Tickets start at just $10 and fans can catch the action up close with seats on the glass available for just $20. The group ticket minimum for Clark Cup Playoff games is just 10 people, and the Budweiser Lounge and Steel Suites are available for playoff games by calling 855-51-STEEL.

The group ticket minimum for Clark Cup Playoff games is just 10 people, and fans can check availability for the Budweiser Lounge and Steel Suites for playoff games by calling 855-51-STEEL.