GENEVA, ILLINOIS — The Chicago Steel made nine selections in Monday’s 2019 USHL Phase I Draft, looking for key pieces for the future of Steel hockey. Chicago chose six forwards and three defensemen from the 2003 birth year over the course of the 10-round Draft.

“I’m very pleased with the nine players that we were able to add to our franchise in today’s Phase I Draft,” said Steel General Manager Ryan Hardy. “In preparation for the Draft, our scouting department built a 25-player list and we were able to get through all eight rounds without deviating from it. This speaks to the preparation and professionalism of Tristan Musser, Vinny Smith and the rest of our scouting staff. Steel fans have a lot of prospects to be excited about for years to come.”

The acquisition of players born in 2003 began for the Steel last month when the team signed defenseman Ryan Ufko to a tender agreement on April 17 for the 2019-2020 season. Ufko, 15, is committed to the University of Massachusetts (Hockey East) and was just the second player in franchise history to be tendered. The 5-8, 170-pound Smithtown, N.Y. native played for the North Jersey Avalanche this season with 79 points (16-63-79) in 83 games while amassing a +81 rating. Ufko was part of the North Jersey Avalanche U16 team that advanced to the USA Hockey Nationals Quarterfinals.

The Steel had a busy Round 2 as they selected three players in a seven-pick stretch, drafting a trio of forwards including Jack Harvey (Round 2, #19 overall, from Omaha), Jackson Blake (Round 2, #22 overall, from Fargo) and Sam Lipkin (Round 2, #26 overall).

Harvey, a Stacy, Minn. native, is a high-IQ playmaker who played for Gentry Academy this season where he recorded 37 points (15-22-37) in 13 games played.

Chicago had a break in the action before they had a pair of picks in Round 5, selecting Brad Lambert (Round 5, #62 overall, from Madison) and Thor Byfuglien (Round 5, #71 overall).

Lambert, a Lahti, Finland native, played for three different levels of the Pelicans program in Finland, including 17 games at the U20 level where he recorded 11 points (2-9-11) in 17 games. In November of 2018, Lambert became the first player ever to play in Finland's U20 league as a 14-year-old. Lambert finished third on the team in scoring. He was named European Youth Winter Olympic Festival Best Forward while winning a Bronze Medal with the Finnish U17 National Team this season. Hockey is in Lambert’s blood as his father (Ross) played college hockey at Princeton University before appearing in 100 games in the American Hockey League (Moncton Alpines, Nova Scotia Oilers). Brad’s uncle (Lane) played 283 games in the NHL for three teams (Detroit Red Wings, New York Rangers, Quebec Nordiques) and is currently an Associate Coach for the New York Islanders. Brad’s cousin (Jimmy) is currently a forward for University of Michigan and just played his freshman year where he recorded 13 points (4-9-13) in 31 games.

Byfuglien, a native of Roseau, Minn., captained the Roseau Bantam AA team this season and registered 45 points (15-30-45) in 50 games. Thor is the second cousin of former Chicago Blackhawks player Dustin Byfuglien, who won the Stanley Cup with the Blackhawks in 2010.

The Steel finished the Draft by taking forwards Michael Abgrall (Round 6, #87 overall) and Parker Murray (Round 7, #102 overall), followed by defenseman Brendan Fitzgerald (Round 8, #117 overall).

Abgrall, a Richmond, BC native, appeared in 29 games for the Burnaby Winter Club Elite 15s this season where he registered 48 points (26-22-48). He also appeared in five games for the Powell River Kings of the British Columbia Hockey League (BCHL) where he registered a pair of assists. Abgrall was previously selected by the Edmonton Oil Kings (Round 4, #67 overall) in the 2018 WHL Bantam Draft.

Fitzgerald, a North Reading, Mass. native, played 18 games for the Islanders Hockey Club 16U (USPHL) program this season and registered six assists as the Islanders won the USPHL 16U Championship. Fitzgerald’s father (Tom) played 1,097 games in the NHL with seven teams (New York Islanders, Florida Panthers, Colorado Avalanche, Nashville Predators, Toronto Maple Leafs, Boston Bruins and Chicago Blackhawks). Tom played 15 games for the Blackhawks at the end of the 2001-2002 season and is currently the Assistant General Manager of the New Jersey Devils. Both of Brendan’s older brothers are NHL prospects as Ryan (24) was drafted by the Boston Bruins (2013, Round 4, #120 overall) and Casey (22) was taken by the Buffalo Sabres (2016 Round 3, #86 overall). Brendan is also the cousin of current NHL players Matthew Tkachuk (Calgary Flames), Kevin Hayes (Winnipeg Jets), Jimmy Hayes (Pittsburgh Penguins) and retired NHL forward Keith Tkachuk.

The 2019 USHL Draft concludes Tuesday with the Phase II Draft (1999-2003 birth years) beginning at 10 a.m. CT. Be sure to check ChicagoSteelHockeyTeam.com and follow along on Twitter (@ChicagoSteel) for live coverage.

The Steel will hold their annual Tryout Camp June 6-9 at Fox Valley Ice Arena, which will be open to the public with a featured all-star game to close out the weekend.

Chicago begins its quest for its second Clark Cup Championship on Friday, May 10 at 7:05 p.m. CT in Sioux Falls, S.D. as the Steel battle the Western Conference Champion Sioux Falls Stampede in the best-of-five Clark Cup Final. The Steel will host Game 3 on Friday, May 17 and Game 4 on Saturday, May 18, if necessary.

All Steel games are broadcast live on HockeyTV (video) and mixlr.com/chicago-steel (free audio). 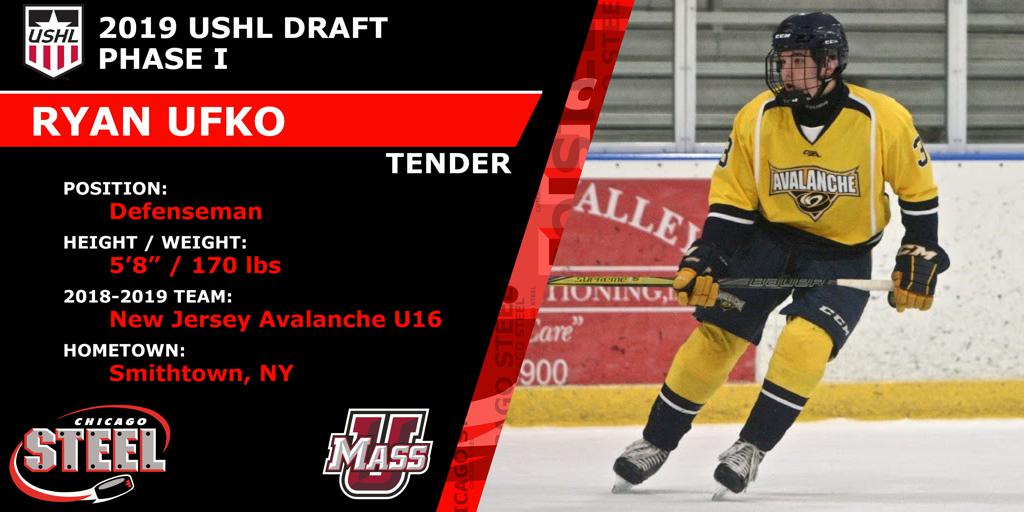 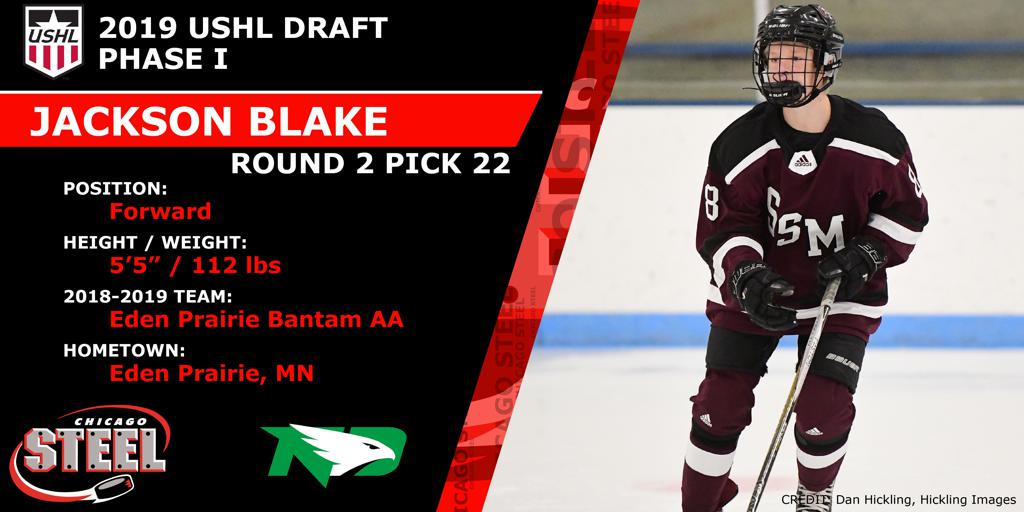 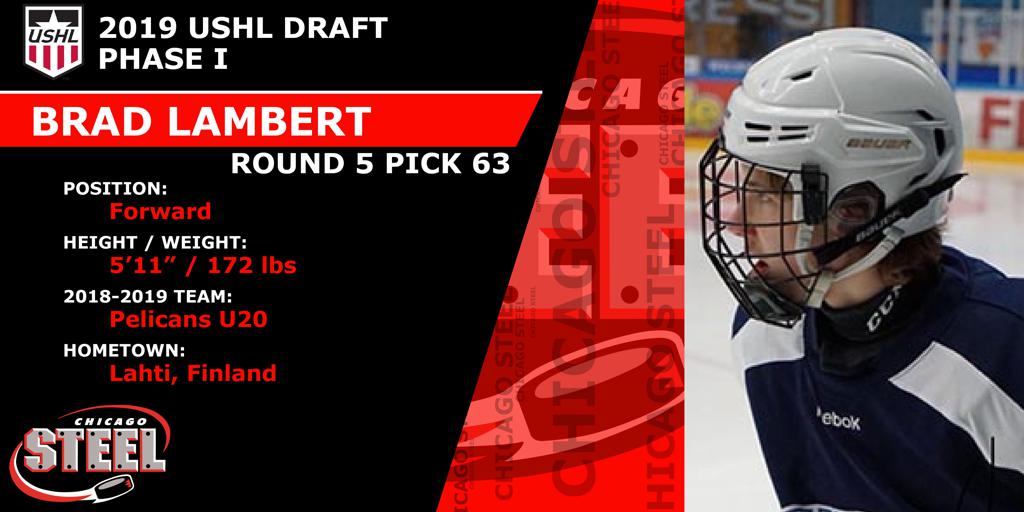 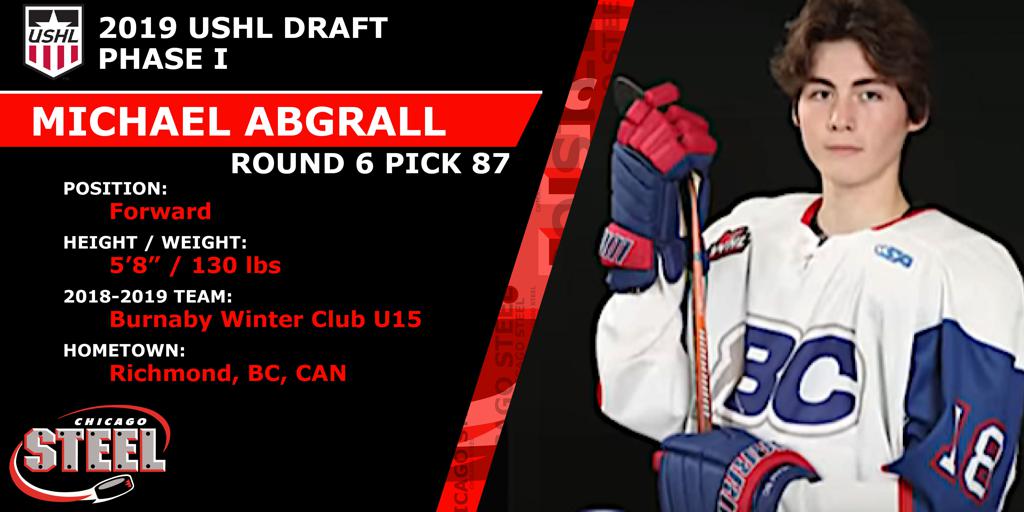 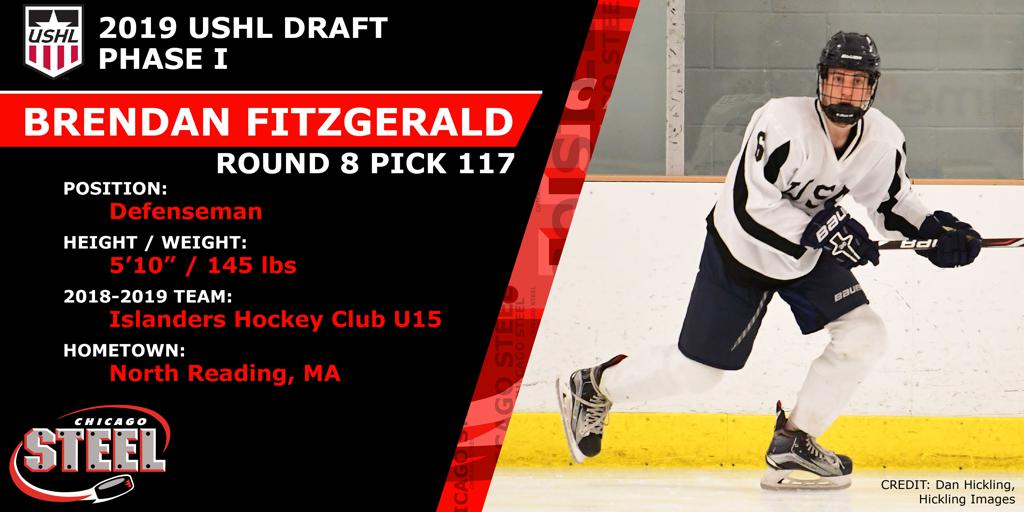 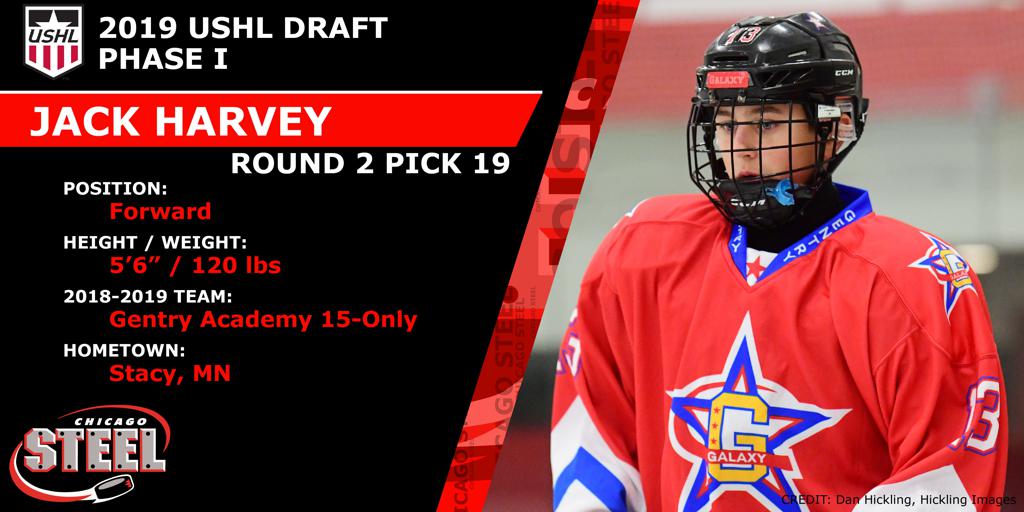 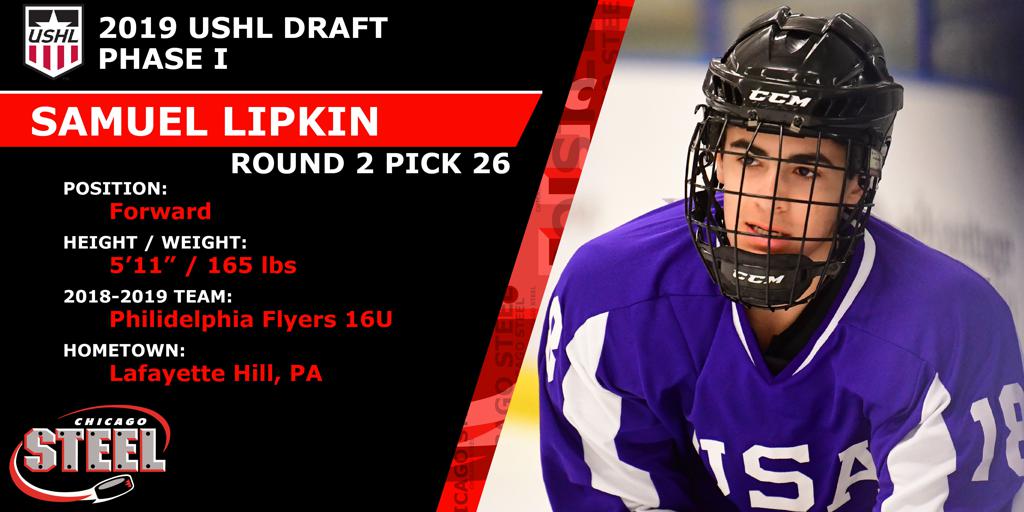 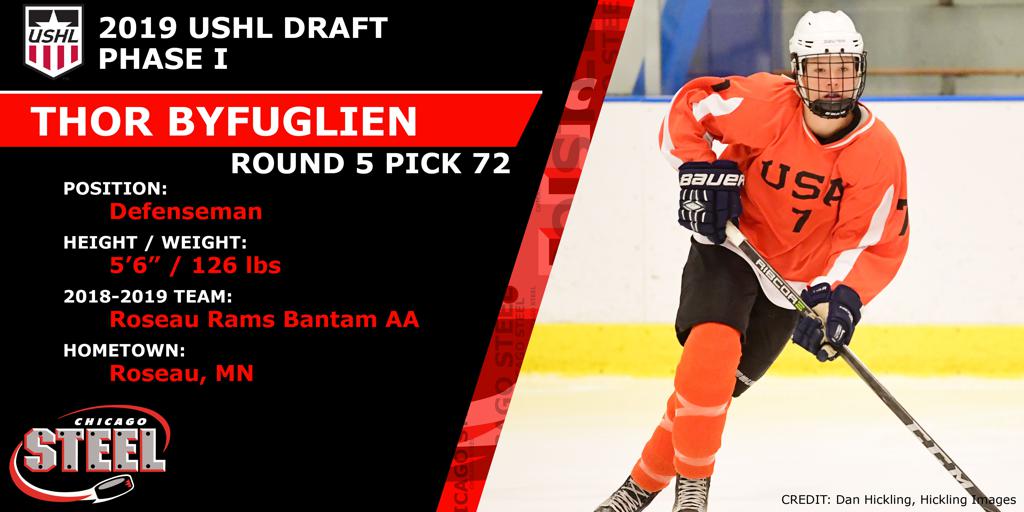 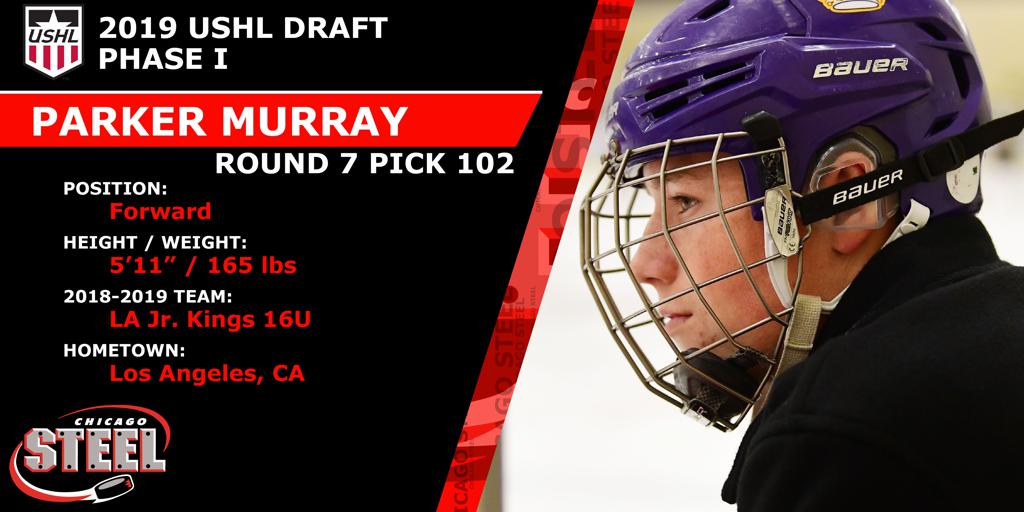