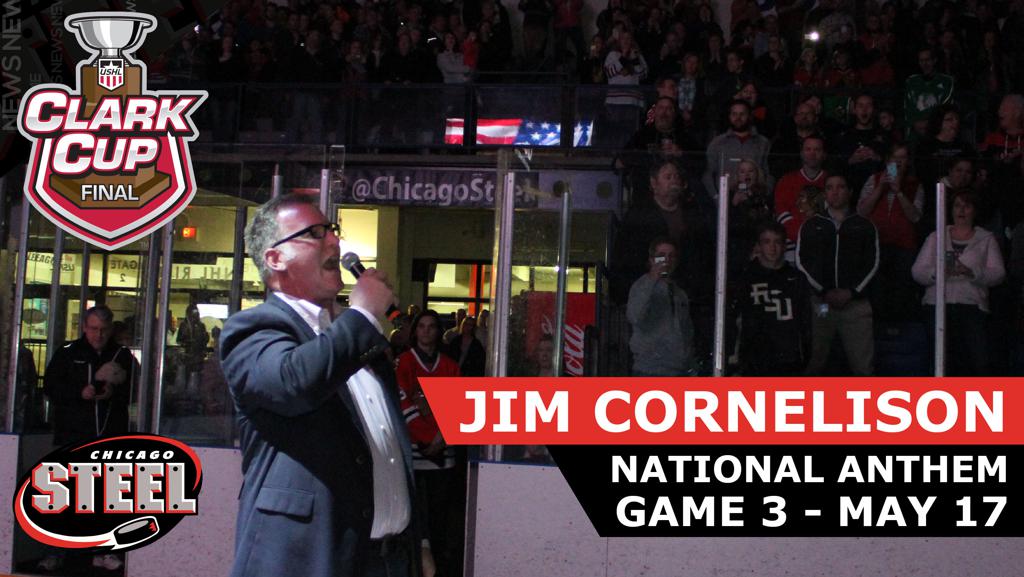 GENEVA, ILLINOIS — The Chicago Steel announced Tuesday that Chicago Blackhawks National Anthem performer Jim Cornelison will perform the National Anthem at Game 3 of the Clark Cup Final on Friday, May 17 at Fox Valley Ice Arena in Geneva. This is the fourth time Cornelison has performed for the Steel at Fox Valley Ice Arena and second time prior to a Clark Cup Final game (May 20, 2017 – Game 3). Fans are encouraged to arrive early for Friday’s game to be in their seats for the anthem prior to the 7:05 p.m. game.

The first 1,500 fans in attendance Friday night will also receive a rally towel giveaway. Chicago currently trails the Sioux Falls Stampede 2-0 in the best-of-five series and will also host Game 4, if necessary, on Saturday, May 18 at 7:05 p.m. at Fox Valley Ice Arena.

Youth hockey players can still take advantage of the Chicago Steel “Our Gift to Hockey” program, which allows Illinois youth hockey players a complimentary ticket for themselves and an accompanying adult for either of the team’s Clark Cup Final home games this weekend. Players must fill out a request for the tickets and may do so through a link offered at ChicagoSteelHockeyTeam.com.

This year marks just the second time in the team’s 19-year history that the Steel have advanced to the Clark Cup Final. Chicago won its only Clark Cup Championship in 2017, defeating the Sioux City Musketeers in five games.

Clark Cup Final tickets are on sale now at the Steel Box Office, by phone at 855-51-STEEL, or online at ChicagoSteelHockeyTeam.com. Tickets start at just $10 and fans can catch the action up close with seats on the glass available for just $20. The group ticket minimum for Clark Cup Playoff games is just 10 people, and the Budweiser Lounge and Steel Suites are available for playoff games by calling 855-51-STEEL.

All Steel games are broadcast live on HockeyTV (video) and mixlr.com/chicago-steel (free audio).