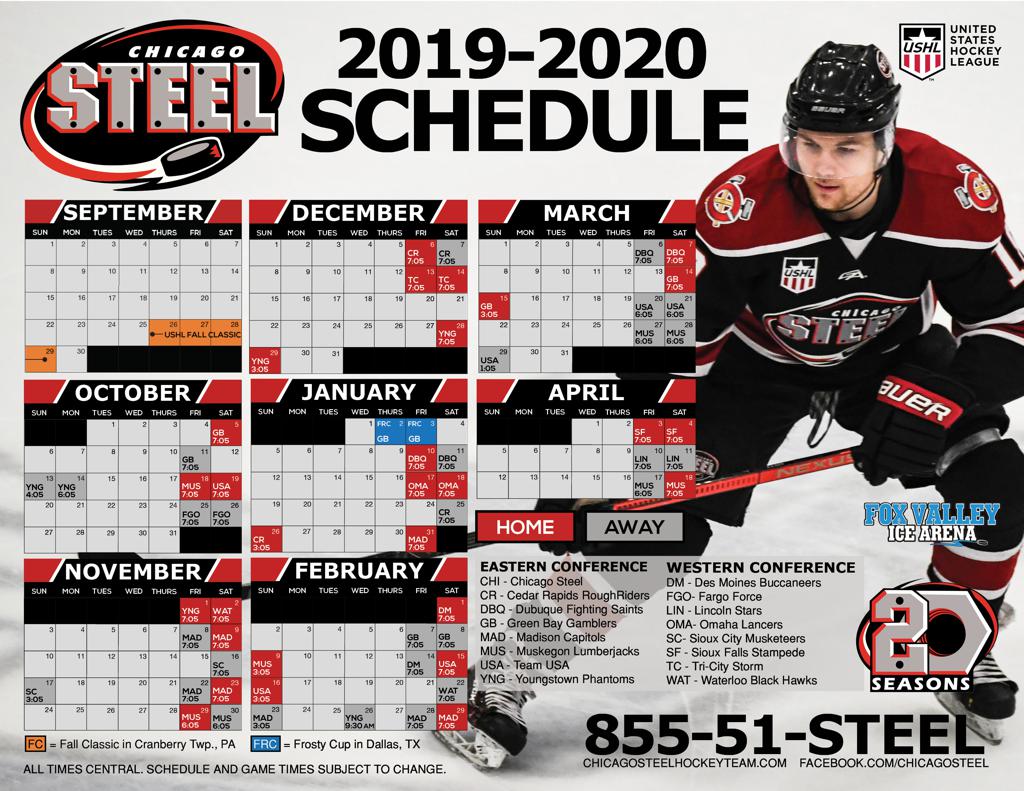 GENEVA, IL — The Chicago Steel will open the home portion of the team’s 2019-2020 schedule on Saturday, October 5 when they host the Green Bay Gamblers at Fox Valley Ice Arena in Geneva, the United States Hockey League announced today.  The Steel, who enter their 20th season, will play 29 home games at Fox Valley Ice Arena during the course of the 62-game schedule.

The Steel will be home for several key holidays and events including home games during the CCM World Invite, the world’s largest youth hockey tournament in one city, a game vs. Muskegon on Black Friday, two home games vs. Youngstown between Christmas and New Year's, and a pair of home games during both Martin Luther King, Jr. Day Weekend and Presidents Day Weekend.

The Steel will host a Clark Cup Final rematch against the Sioux Falls Stampede on Friday, April 3 and Saturday, April 4 at Fox Valley Ice Arena in Geneva.  The team’s home schedule consists of only Friday, Saturday and Sunday home dates.

After capturing the organization’s second Eastern Conference Championship in 2018-2019, the Steel will begin their quest for a Clark Cup title with a pair of games at the 2019 Dick’s Sporting Goods USHL Fall Classic September 26-29 in Cranberry Township, PA.  Dates and opponents will soon be announced by the USHL.

October opens with six straight games against Eastern Conference opponents.  After a pair of games against the Gamblers, the Steel will travel to Youngstown on Columbus Day Weekend before returning home to battle Muskegon on Friday, October 18 in a rematch of last season’s Eastern Conference Final.  The following night (Oct. 19), the Steel play host to Team USA - U17 as they visit Fox Valley for the first of three trips to Geneva this season.

The Fox Valley Ice Arena will be a popular destination for youth hockey teams from around the country participating in the CCM World Invite the first two days of November.  Later in the month, the Steel will host Muskegon on Black Friday (Nov. 29) with an earlier-than-usual start time of 6:05 p.m.

December features five home games including a visit from the 2018-2019 Anderson Cup Champion Tri-City Storm (Dec. 13 & 14).  The Steel will celebrate the holiday season with their fans on Saturday, December 28 and Sunday, December 29 with a pair of home games vs. Youngstown to close out the calendar year.

The Steel are scheduled to open 2020 in Dallas, TX as part of the USHL Frosty Cup.  The Steel and Green Bay Gamblers have been selected as the two USHL teams to play a pair of games in Dallas Thursday, January 2 and Friday, January 3.  More details on this event will be released soon.

When the Steel return to Illinois, they’ll enjoy a busy month of January at home with matchups against conference Dubuque (Jan. 10) and Cedar Rapids (Jan. 26), and a two-game set against the Omaha Lancers (Jan. 17 & 18).

February highlights include the only visit of the season to Fox Valley Ice Arena by the Des Moines Buccaneers (Feb. 1) and a Presidents Day Weekend battle with Team USA – U17 (Feb 15 & 16).

The Steel play just three home games during the month of March, all in the first half of the calendar before heading on the road for the team’s longest road trip, five games between March 20 and March 29 including the only matchup of the season against Team USA – U18 (Mar. 21).

After a visit from the Clark Cup Champion Sioux Falls Stampede (April 3 & 4), the Steel will close out the regular season at home against Muskegon on Saturday, April 18.

This season’s playoff format will remain the same as last season, with the top six teams from each Conference qualifying for the playoffs. The 2020 Clark Cup Playoffs are slated to begin April 20, 2020.

Friday and Saturday home games begin at 7:05 p.m. with the exception of the November 29 game which will start at 6:05 p.m.  The Steel play five Sunday home games, all of which will begin at 3:05 p.m.  Preseason games will be announced shortly.

Steel season ticket plans for the 2019-2020 season are on sale now starting at just 5 games for $45.  Full season tickets start at just $8/ticket. The Steel are also accepting deposits for groups, suites, birthdays and the Budweiser Lounge for 2019-2020 home games.

Over the coming weeks, the team will release its 2019-2020 Promotional Schedule as well as details on special events and offerings related to the team’s 20th Season.