STEEL ON PACE FOR HISTORIC SEASON

GENEVA, ILLINOIS - NHL scouts are flocking to the Fox Valley Ice Arena in Geneva to see the Chicago Steel deliver a high-octane offensive performance by the next generation of NCAA and professional stars.  At the halfway mark of the United States Hockey League (USHL) season, the Chicago Steel lead the league with an astounding .850 win percentage, winning a franchise-record 11 in a row and 18 of their last 19 games and posting a 25-4-1-0 record (51 pts) overall, tops in the league and the second best record through 30 games in league history.

The team will send five players to the 2020 BioSteel All-American Game on January 20th, a showcase of the top American-born 2020 NHL Draft prospects. The Steel recently had six players named to the Midterm NHL Central Scouting list for North American skaters.

“There’s a kind of electricity in the arena this year that is really exciting,” said Steel President Dan Lehv.  “In some ways, we’re still the best kept secret in town, but fans are coming to appreciate that this is a special group of players that will likely be household names in the near future.”

The franchise is on pace for the best season in its 20-year history. A snapshot of current stats showcases the momentous season the Chicago Steel are having as they approach the halfway point:

Steel defenseman Owen Power is not eligible until 2021 but was ranked as the #2 overall NHL prospect in that class by Craig Button, director of scouting for TSN. 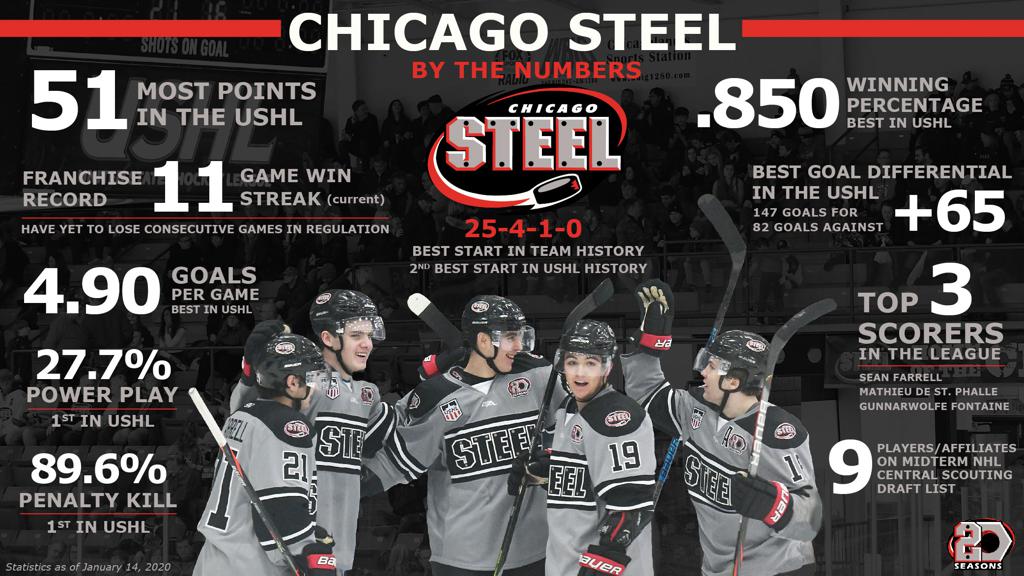