TINSON FAMILY HIGHLIGHTED AS “BILLET FAMILY OF THE YEAR” 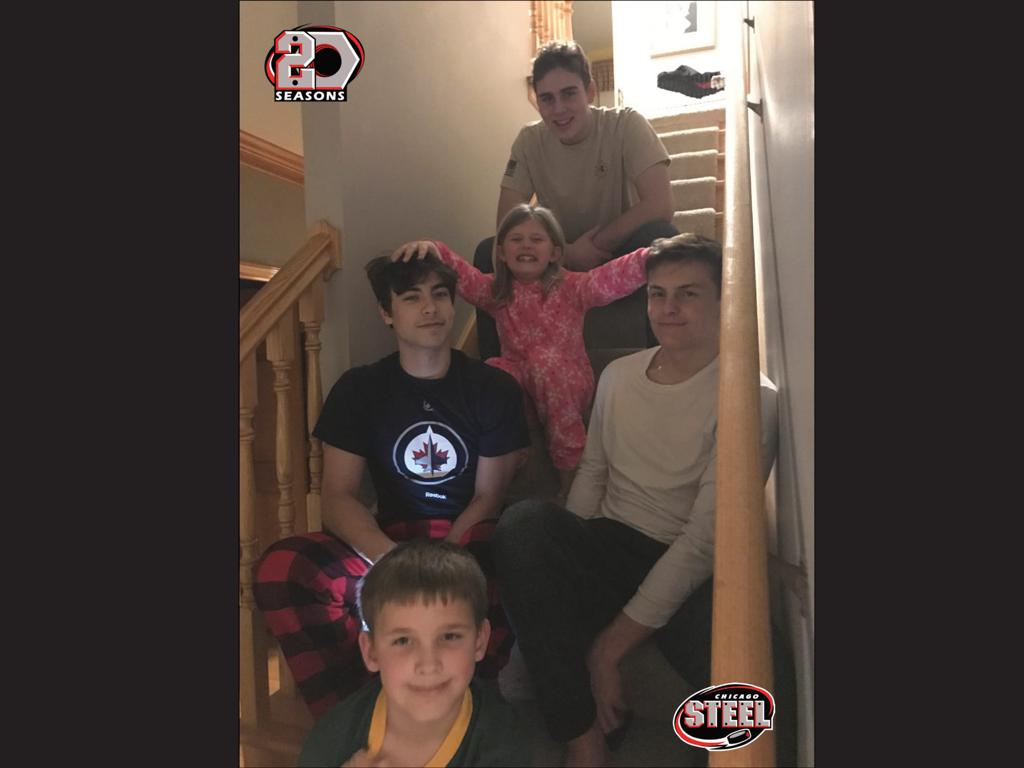 GENEVA, ILLINOIS — The Chicago Steel announced Tuesday that the team has chosen to highlight the Tinson family of Sugar Grove for the USHL’s Billet Family of the Year award. The award is a first-year honor introduced by the United States Hockey League which recognizes one host family from each of its 16 member teams.

The Tinsons were chosen to represent the 14 families that housed Steel players during the 2019-2020 season.  Billet families play a vital role to the success of the team, with families providing room and board for players who range in age from 16 to 20 and come from all over the United States and internationally.

This was the first year as a host family for the Tinsons – Candice and Bob (parents), Rob and Mackenzie (children) – while housing three players; forward Dawson Pasternak, defenseman Colton Huard and goaltender Ian Shane.

Prior to this year, the family had never hosted hockey players. Candice coordinates a foreign exchange student program over the summer months.

“We have become hockey fans because of the Steel but we knew nothing about hockey going in,” said Candice.

The family was introduced to the idea when Bob and Rob attended a Chicago Steel game with Rob’s Cub Scout pack during the 2018-19 season. Current Steel Head Coach Brock Sheahan, who was the Associate Coach at the time, led a character talk for the Cub Scout troop before the game and mentioned the role that billet families play for the Steel.

Bob returned home and told Candice that it might be something they could do the following season.

“It’s worked out as well for the Tinsons as it has for the Steel, which I think is what makes it such a perfect match,” said Keohane. “Candice was always reaching out, asking what they could do and how else they could help.”

During the season, all four members of the family were fixtures at Chicago Steel home games while Bob and Rob made the trek to road games throughout the year.

In December, the Tinsons volunteered alongside players and staff at Feed My Starving Children in Aurora, helping package food for children around the world.

Despite the Tinsons having no prior background in hockey, the Sugar Grove residents have taken a love to the sport and to their billet players with some help along the way.

“Dawson Pasternak’s dad taught my husband the difference between a power play and a penalty kill,” said Candice.

“We can’t do what we do without our billet families,” said Steel President Dan Lehv.  “They provide unwavering support for our players, many of whom are living away from home for the first time. It often leads to life-long bonds with the players they house.”

The recognition is the first of its kind from the USHL.

"We want to thank every single family that serves as a billet for our players. We started this award this year to recognize their selflessness," said USHL President & Commissioner Tom Garrity. "While we know every single one of our billet families for all 16 of our Member Clubs welcome our players with open arms as if they're members of their own family, we are excited that going forward, our Clubs will be able to highlight one of these outstanding families each season. Their commitment to shaping these young men's careers and personalities during their time in the USHL is exemplary and we are continually amazed by the dedication they show in serving as a billet family."

The Steel were awarded the 2020 Anderson Cup as the regular-season champions of the United States Hockey League after posting a 41-7-1-0 (83 pts) record, a franchise-best for wins and points in a season. Chicago set league records with an .847 win percentage and an average of 4.94 goals per game prior to the cancellation of the regular season and Clark Cup Playoffs on March 18.