STEEL ROUND OUT ROSTER, SELECTING 14 PLAYERS IN PHASE II DRAFT

GENEVA, ILLINOIS — The Chicago Steel completed the 2020 USHL Draft by choosing seven forwards, six defensemen and one goaltender, a total of 14 players, in Phase II of the 2020 USHL Draft on Tuesday. Phase II is open to players in the 2000 through 2004 birth years eligible to play junior hockey and not currently protected by another USHL team.

Over the two phases of the USHL Draft held Monday and Tuesday, the Steel added 24 players to its protected list.  Prior to the Draft, the Steel signed tender agreements with defenseman Jake Livanavage and forward Adam Fantilli.

“As an organization, we’re extremely excited to have had the opportunity to draft all 24 of the players we selected through Phase I and Phase II of the 2020 USHL Draft,” said Steel Director of Player Personnel Tristan Musser. “Our scouting department has identified very specific criteria as to what we’re looking for and our area scouts put in countless hours at the rink in pursuit of the identification of those attributes. We’re looking forward to continuing to strengthen the relationships we’ve built with the players we drafted and officially welcome them to the Chicago Steel family.”

The Steel didn’t have a pick until the sixth round on Tuesday due to previous transactions but selected two players in a quick turnaround. Chicago took netminder Nick Haas off the board with the 88th overall selection then chose defenseman Lukas Gustafsson with the 92nd overall pick.

Haas made 15 appearances for Salisbury School in Salisbury, Conn., this season, posting a 2.20 goals-against average and a .918 save percentage. The Williamsville, N.Y., native took the net with the Rochester Selects U18 club three times during the 2019-20 campaign.

Gustafsson, a native of Alpharetta, Ga., led Cushing Academy in Ashburnham, Mass., with 29 helpers and ranked second in total scoring with 44 points (15G, 29A) over 34 contests. The 5-foot-10, 174-pound blueliner is committed to Boston College.

Chicago went back to the defensive side of the puck with their next pick, choosing Tyler Rubin, a blueliner from Wayland, Mass., with the 149th overall selection in Phase II. The Princeton University-bound skater played in 30 games for Belmont Hill High in Belmont, Mass., leading the club’s defensemen with 23 points (6G, 17A).

The Steel took two forwards with their next available selections in rounds 10 and 11.

Matthew Beniers was taken off the board by Chicago as the Steel chose the Harvard University commit with the 152nd overall pick. The skater from Hingham, Mass., totaled 16 points (7G, 9A) in as many games of USHL play with the US National Team Development Program U18s during the 2019-20 season.

Yorktown Heights, N.Y., native, Michael Emerson was chosen by Chicago with the 167th overall pick. A product of the North Jersey Avalanche 16U team, Emerson tallied 20 goals and picked up 24 helpers over 19 games of Atlantic Youth Hockey League 16U competition. The forward, standing at 5-foot-10 and weighing in at 150 pounds, was a teammate of current Steel defenseman Ryan Ufko during the 2018-19 season with the North Jersey Avalanche 16U club.

Jason Marsella ended the run on forwards for the Steel, as the defenseman went off the board with the 182nd overall selection in Phase II. The Greenwich, Conn., native is a Yale University commit and split his 2019-20 season between the North Jersey Avalanche 18U club and Avon Old Farms School, located in Avon, Conn. Marsella has shared the ice as a teammate with current Steel blueliner Ryan Ufko as well as fellow 2020 Steel draft picks Mick Thompson, Dylan Robbins and Michael Emerson.

Forward Jordan Brisson, younger brother of 2020 USHL Rookie of the Year Brendan Brisson, was the next forward selected by the Steel with the 197th overall pick. After multiple seasons with the Los Angeles Jr. Kings, the Manhattan Beach, Calif., native notched 25 points (11G, 14A) in 41 games for Shattuck St. Mary’s U16 team in 2019-20.

Chicago chose Jacob Rude, a defenseman from Anoka, Minn., with the 212th overall selection after his season with the Sioux Falls Power 16U team, then closed out the 15th round with the choice of Charlie Major, a forward hailing from Skaneateles, N.Y. Major, a 5-foot-5, 125-pound skater, split his 2019-20 campaign between the Rochester Selects 15U squad and Skaneateles High.

The Steel spent their next three picks on players with overseas lineage, starting with a Russian-born forward who is already billed as a top prospect for the 2023 NHL Draft. Matvey Michkov was chosen with the 257th overall pick after charting 70 goals and 39 assists in just 26 games for Lokomotiv Yaroslavl U16 during the 2019-20 season. Michkov represented his home country of Russia in the Youth Olympic Games, totaling 22 points (10G, 12A) in 11 contests during the tournament.

Chicago picked up Paavo Hiltunen, a defenseman from Kerava, Finland, in the 18th round (272nd overall) before selecting Davis Borozinskis with the 287th overall pick in the 19th round. Borozinskis, originally from Liepaja, Latvia, skated with the Sioux Falls Power U16 club in his first season of competition in North America and was a teammate of Jacob Rude, taken by the Steel just five rounds earlier in Phase II. Both Rude and Borozinskis were teammates of current Chicago forward Dawson Pasternak with the Sioux Falls Power 16U.

The Steel capped their Phase II Draft class with the choice of Bryceon Lago, a 5-foot-10, 181-pound blueliner, originally from Miami, Fla. The left-handed shooting defenseman played with Mick Thompson and Michael Emerson on the North Jersey Avalanche 16U team, all members of the Chicago Steel 2020 Draft class.

Over two days of the USHL Draft in Phase I and Phase II, the Steel selected 15 forwards, eight defensemen and one netminder in addition to acquiring one forward and one blueliner through tender agreements.

Players selected will receive invitations to the Chicago Steel Main Camp, scheduled to be held later this summer at a date yet to be determined as the team awaits guidance from arena management and in order to ensure compliance with local and state guidelines.

The Steel were awarded the 2020 Anderson Cup as the regular-season champions of the United States Hockey League after posting a 41-7-1-0 (83 pts) record, a franchise-best for wins and points in a season. Chicago set league records with an .847 win percentage and an average of 4.94 goals per game prior to the cancellation of the regular season and Clark Cup Playoffs on March 18. 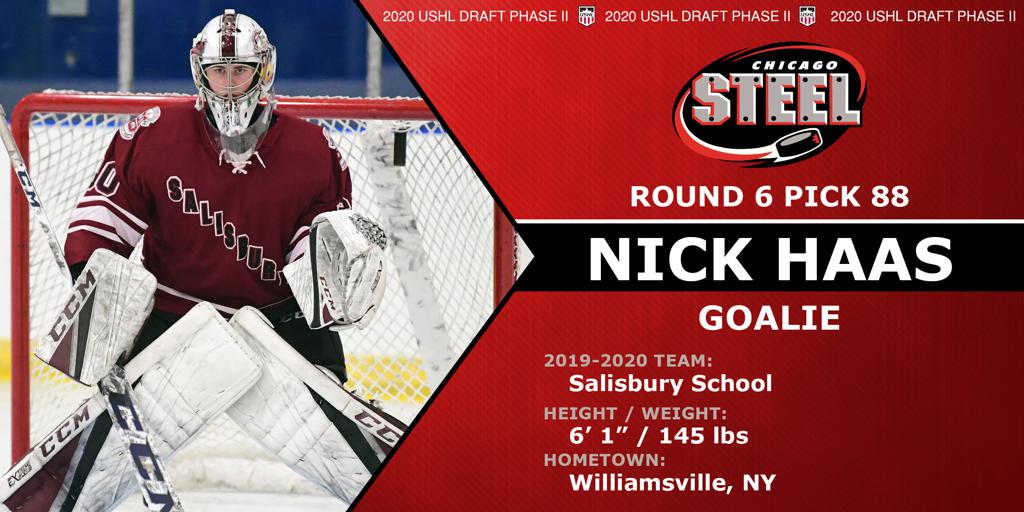 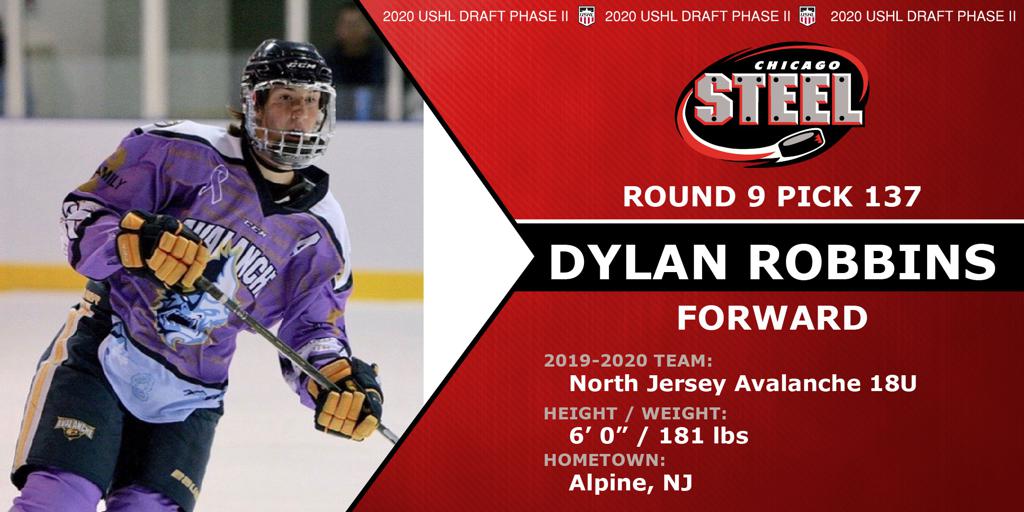 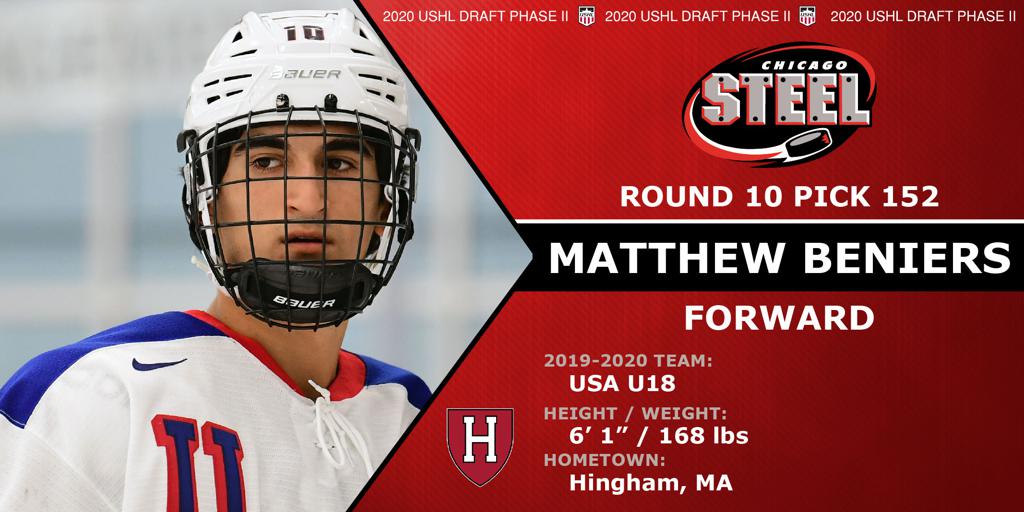 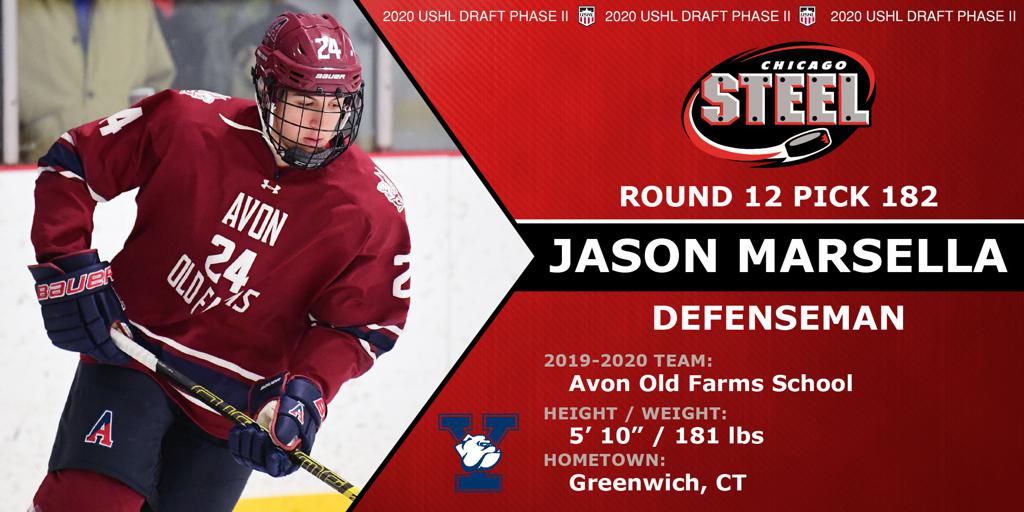 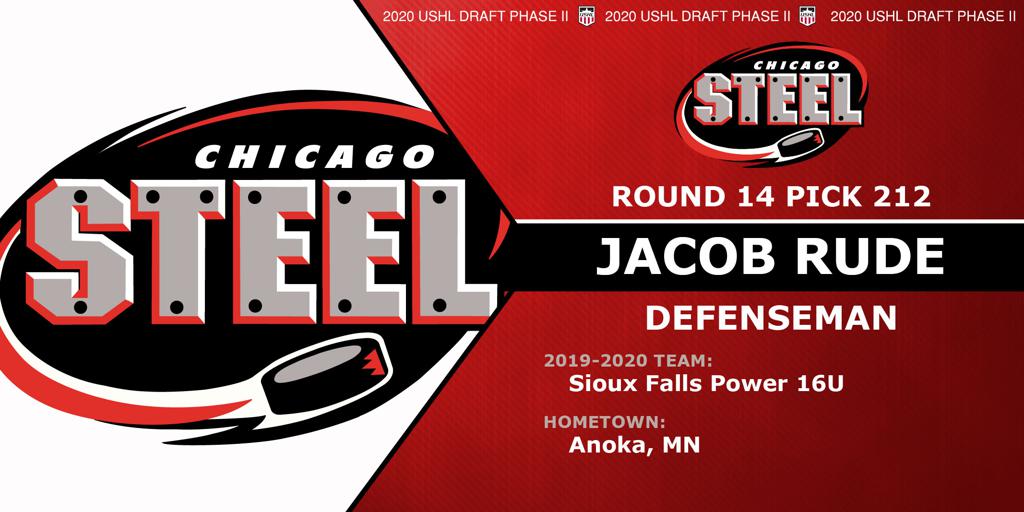 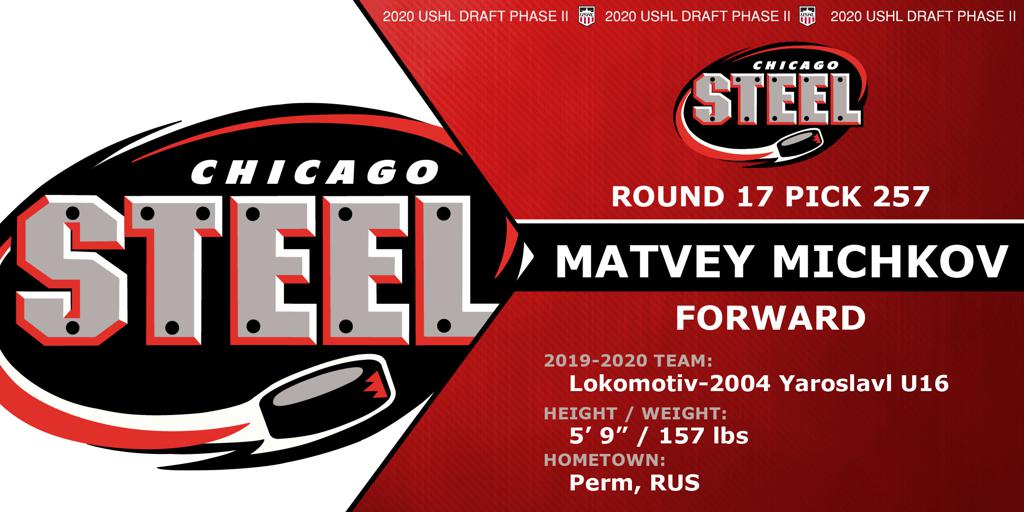 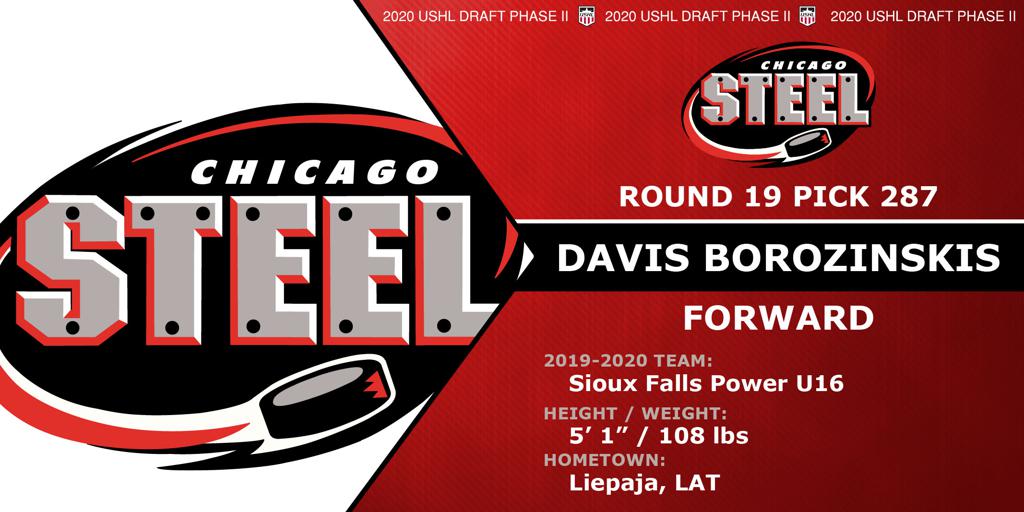 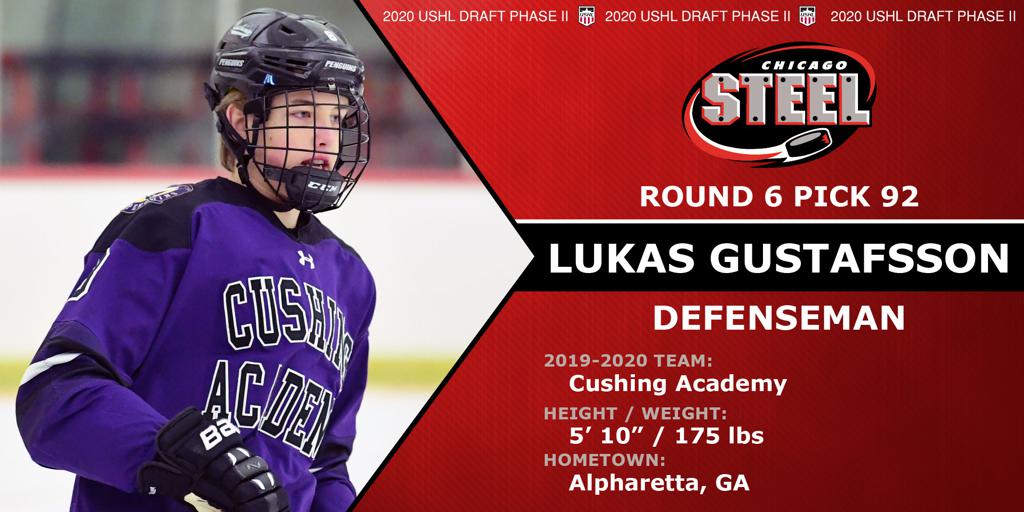 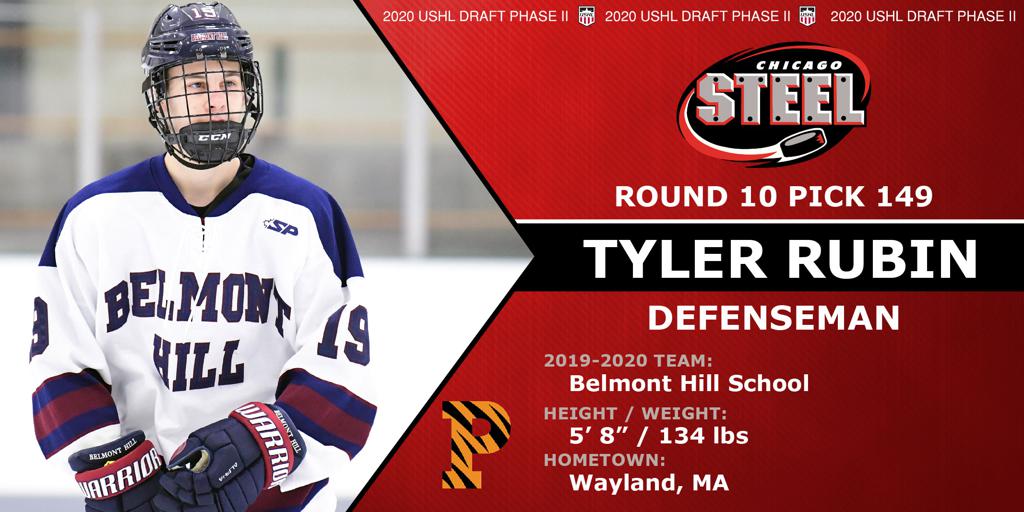 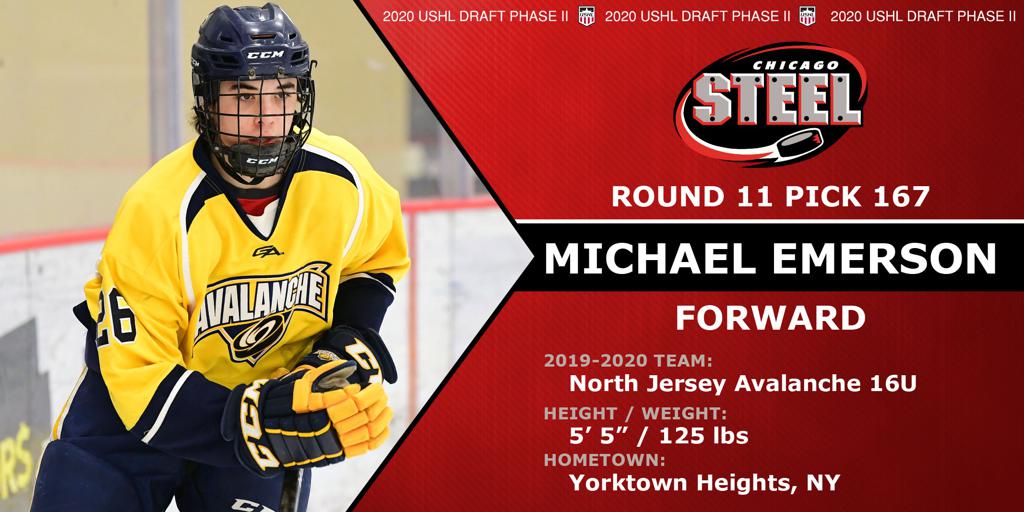 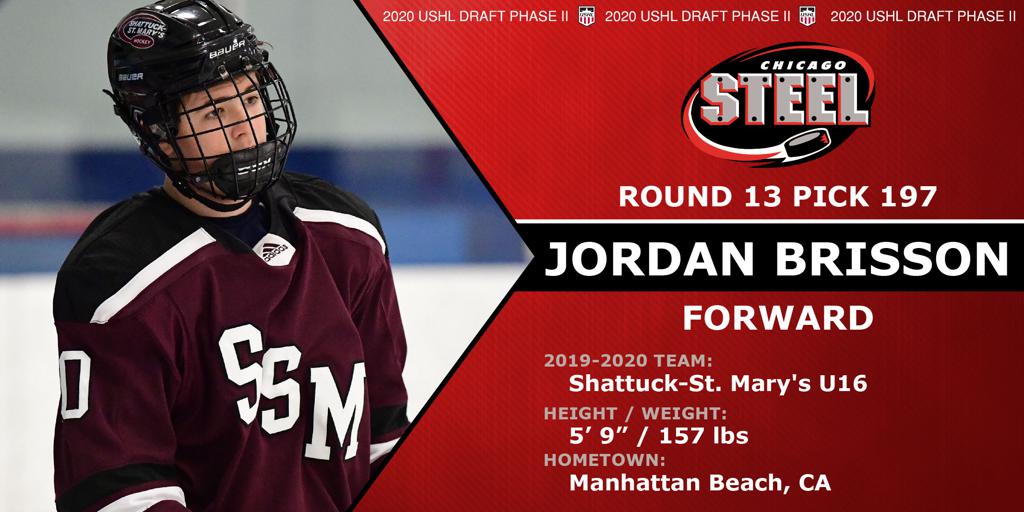 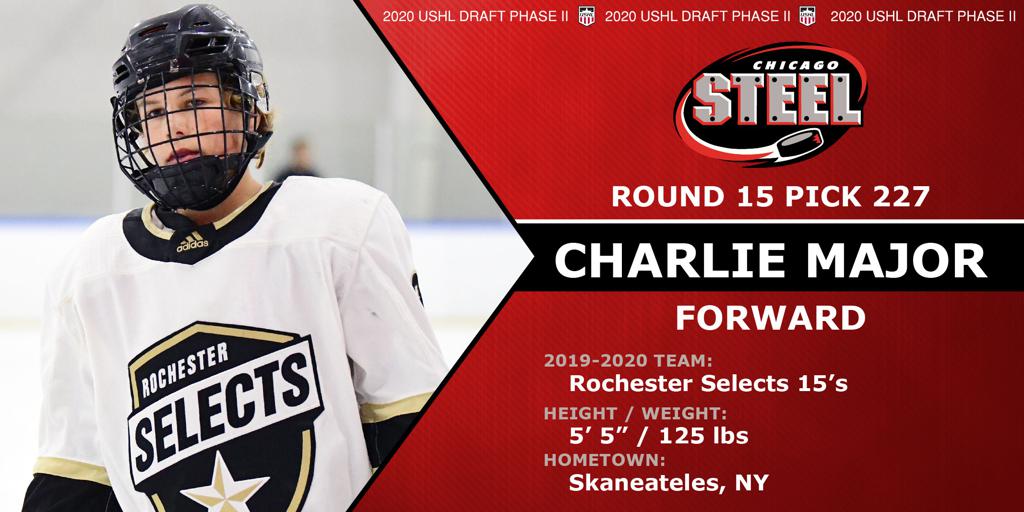 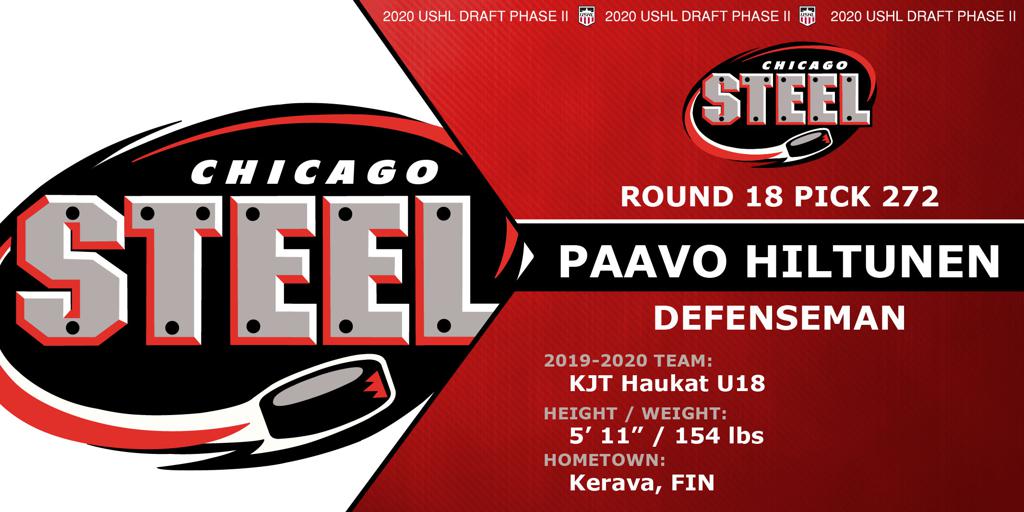 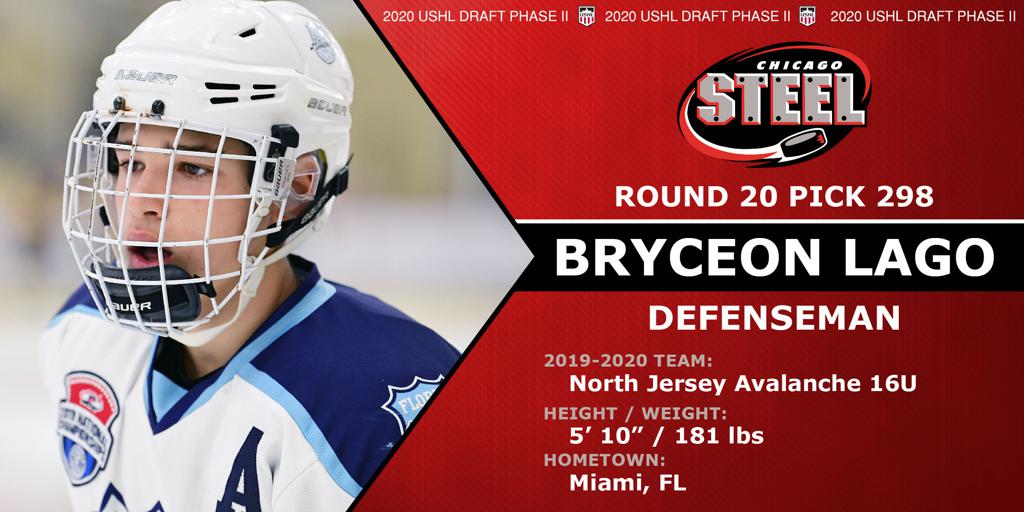