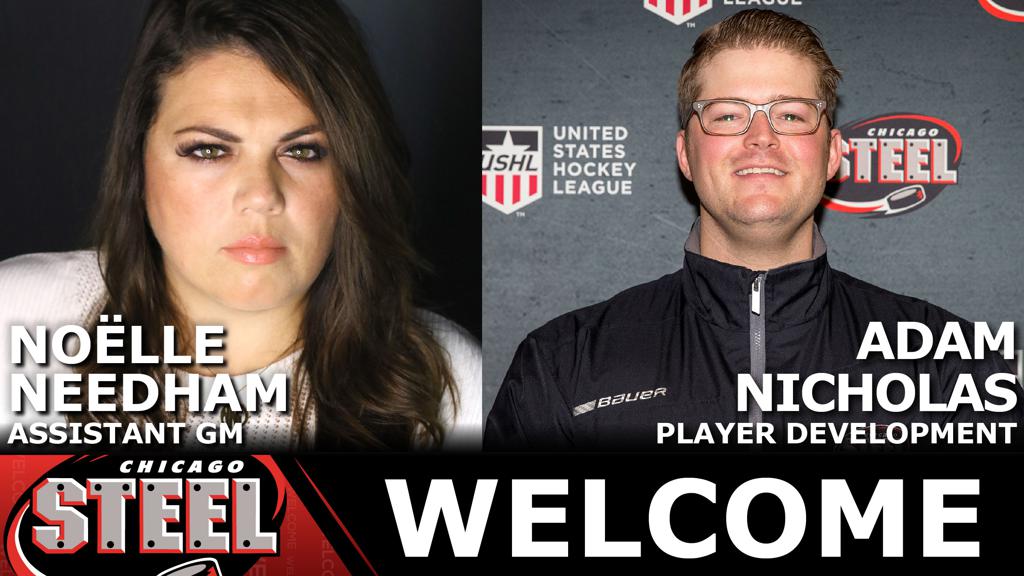 Needham has been an amateur scout for the Toronto Maple Leafs since the 2018-2019 season in addition to coaching the Sioux Falls Power 16U AAA team. The Elkton, S.D., native co-founded Legend Hockey in 2009 following her collegiate career as a forward with the University of Minnesota State-Mankato.

“Noelle Needham is a brilliant hockey executive with an expansive skill set and knowledge base,” said Steel General Manager Ryan Hardy. “Her experience, not only as an Amateur Scout with the Toronto Maple Leafs or as a coach with Legend Hockey and the Sioux Falls Power, but also as an entrepreneur and business owner, adds significant dimension to what we are building.  I'm thrilled to partner with her as we continue to grow our organization in the years to come.”

Adam Nicholas joins the Steel in Chicago full-time as player development and hockey research consultant after being involved with the club over the past three seasons through the Chicago Steel partnership with Belfry Hockey.

“I have been a part of the Steel organization for the last three years as a consultant with Belfry Hockey,” said Nicholas. “When Darryl asked me to join him in this endeavor I didn’t hesitate and said yes. Now, Ryan Hardy has asked me to join as a full-time member and seeing this culture blossom over the last two years into unarguably the best place to work in hockey, again I had zero hesitation and said yes. Thank you to Larry Robbins, Darryl, Ryan and the hockey ops staff for this unbelievable opportunity to get more in the trenches of this beautiful culture.”

“Adam Nicholas is one of the premier player development coaches in the world and a consummate student of the game from a research perspective,” said Hardy. “He has been an integral part of everything we've done on the ice over the past two years through our continued partnership with Belfry Hockey.  I'm excited for our players and staff alike to collaborate on-site with him on a daily basis.”