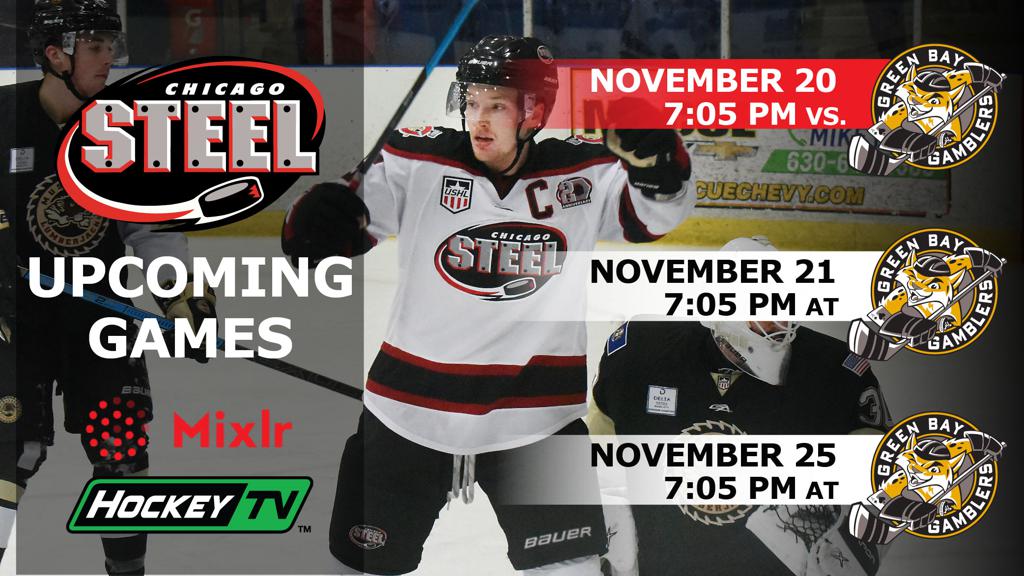 The two-game set begins on Friday at Fox Valley Ice Arena at 7:05 pm when the Gamblers travel to Fox Valley Ice Arena for the first time in the 2020-2021 season. The clubs will finish the weekend with a matchup Saturday night at Resch Center in Green Bay, another 7:05 pm start time.

The Steel have a 53-59-5-3 record in all-time regular season matchups against the Gamblers but have taken victories in the last four games versus Green Bay dating back to the 2019-2020 season, including a pair of meetings at the USHL’s inaugural Frosty Cup event in Dallas, Tex.  The trip featured an outdoor game at the famous Cotton Bowl won by the Steel 7-2 on Jan. 3.

In last Saturday’s loss to Muskegon, Steel forward Mackie Samoskevich led the team with a career-best five-point performance (5A) while Sean Farrell and Matt Coronato both charted four-point games (2G, 2A). Netminder Ian Shane stopped 32 Lumberjack shots, just one shy of matching his career-best. The Steel were an impressive 5-for-6 (83.3%) on the power play in the game.

The Gamblers have yet to lose in the 2020-2021 regular season, sporting a 3-0-0-0 record (6 pts) thus far. Green Bay held on for a 4-3 victory over the Youngstown Phantoms on Nov. 12 and capped their weekend with another win by a 5-4 margin on Nov. 14. Forward Jackson Kunz has reached the scoresheet in all three Gambler victories this season with four points (3G, 1A) over that stretch. Defenseman Mason Lohrei, a 2nd Round selection by the Boston Bruins (#58 overall) in the 2020 NHL Draft,  has registered four points (2G, 2A) in three games for Green Bay.

After the back-to-back set on Friday and Saturday, the Steel will take on the Gamblers on Wednesday, Nov. 25 at 6:05 pm, the day before Thanksgiving.

Chicago Steel games can be heard on Mixlr at http://mixlr.com/chicago-steel/ (AUDIO) and video may be streamed on available devices through HockeyTV at www.hockeytv.com (VIDEO/AUDIO).