STEEL HIT THE ROAD WITH POINT STREAK ON THE LINE 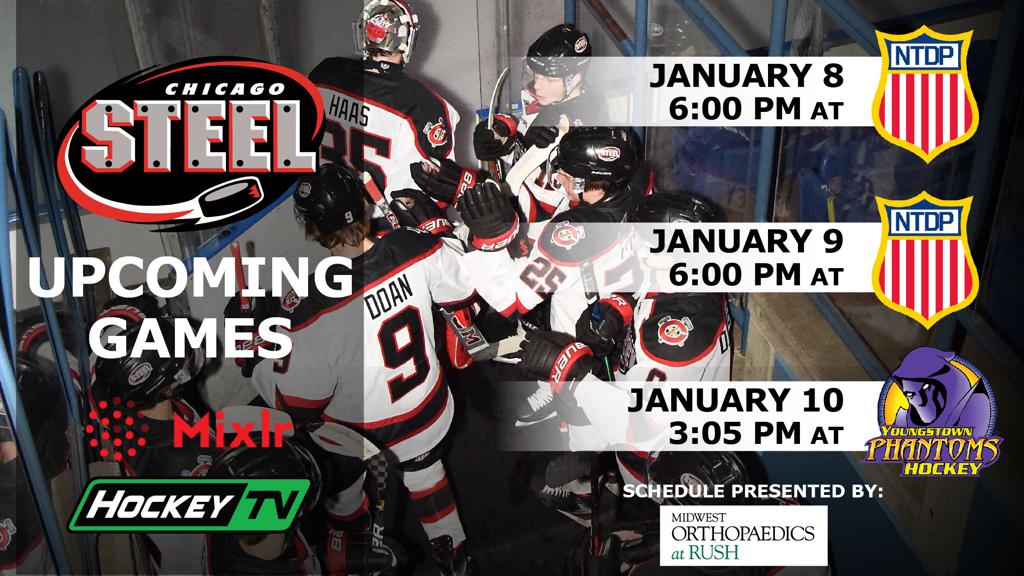 GENEVA, ILLINOIS — The Chicago Steel (11-2-2-0; 24 pts.) take their 11-game point streak on the road for a three-game stretch against Team USA (U17) and the Youngstown Phantoms this weekend.

The road trip starts with two 6:00 pm CT puck drops against Team USA at USA Hockey Arena in Plymouth, Michigan on Friday, Jan. 8 and Saturday, Jan. 9 before finishing with a 3:05 pm CT matinee on Sunday, Jan. 10 versus the Youngstown Phantoms at Covelli Centre in Ohio.

Forward Matt Coronato has reached the scoresheet in all 15 games to begin the year, leading the league with 32 points (14G, 18A). The Harvard-bound skater ended the 2019-2020 regular season on a nine-game point streak to combine for an active 24-game point streak with 46 points (21G, 25A) over that stretch.

The current USHL record for overall point streaks stands at 25 consecutive games with at least a point recorded. Coronato has a chance to tie the mark on Friday with the possibility of setting a new USHL record on Saturday at USA Hockey Arena.

Steel captain Erik Middendorf carries a 15-game point streak of his own into the weekend matchups on the road. The Michigan State University commit shares second place in the USHL points race with 24 points (11G, 13A) this season.

The skater tied with Middendorf for second place among USHL players in points is fellow Steel forward Sean Farrell. The fourth round selection of the Montreal Canadiens (#124 Overall) in the 2020 NHL Draft has tallied nine goals and 15 helpers through the 2020-2021 slate including a current 11-game point streak (6G, 13A).

The Steel took down Team USA U17 in a 5-4 shootout win on Nov. 27 in the first meeting of the season. Dylan Silverstein took the net for the Americans, turning away 33 shots through regulation and overtime. Team USA forwards Issac Howard (9G, 3A) and Frank Nazar III (4G, 8A) share the U17 team lead with 12 points in six games each.

Chicago owns a perfect 3-0-0-0 mark against Youngstown in three matchups this season, scoring an average of 5.33 goals per game. After the Steel swept a three-game weekend set on Dec. 10, 11 & 12 at Fox Valley Ice Arena, forward Erik Middendorf and defenseman Ryan Ufko were named USHL Players of the Week for the respective positions. Middendorf tallied seven points (2G, 5A) while Ufko recorded six points (1G, 5A) in the weekend series.

Phantoms forward Georgii Merkulov reached the scoresheet in all three contests against the Steel in December, totaling three markers and three helpers over that stretch. Riley Duran was selected by the Boston Bruins in the sixth round (#182 Overall) of the 2020 NHL Draft but the Steel held the 6-foot-2, 185-pound forward off the scoresheet in the three-game set in December.

The following weekend, Chicago welcomes two Western Conference opponents to Fox Valley Ice Arena for the first time this season. The Des Moines Buccaneers travel to Geneva on Friday, Jan. 15 for a 7:05 pm CT game and the Waterloo Black Hawks invade Steel home ice for a Saturday showdown on Jan. 16 at 7:05 pm CT.

Chicago Steel games can be heard on Mixlr at http://mixlr.com/chicago-steel/ (AUDIO) and video may be streamed on available devices through HockeyTV at www.hockeytv.com (VIDEO/AUDIO).