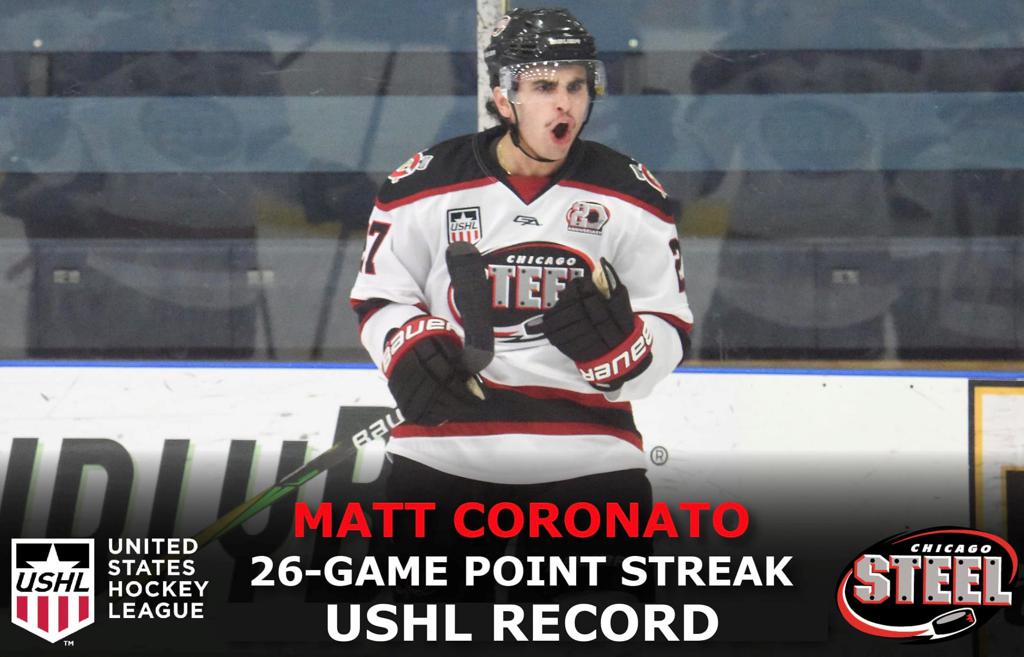 Coronato set the point streak record midway through the first period with an assist on the third Steel goal of the game. The Harvard-bound skater has registered at least a point in every game dating back to Feb. 14, 2020.  The streak spans two seasons and totals 52 points (23G, 29A) during the stretch.  Coronato leads the USHL this season with 38 points (16G, 22A) in 17 games.

Josh Doan recorded his first career hat trick in the USHL and nine different skaters tallied multi-point games for the Steel in the offensive outburst following a defeat to Team USA (U17) the previous night.

The Steel were without several key players due to injury and were forced to play several defensemen as forwards in Saturday’s contest.

Nick Haas, the Steel netminder from Buffalo, N.Y., set a defensive tone five minutes into the game with a set of four saves in a 15-second span.

After Haas froze the puck, the Steel took an offensive zone rush led by Quinn Finley and Jack Harvey. Dawson Pasternak filled the right-side lane and Harvey found the Winnipeg native Pasternak to kick off the scoring for Chicago.

Erik Middendorf scored his first of two goals after Coronato found Sean Farrell with a long lead pass from his own defensive zone. Farrell let a shot go from the left side but Team USA netminder Tyler Muszelik couldn’t corral the puck, leaving the door open for Middendorf.

Chicago scored seven goals in the middle frame, the most in a single period this season, distancing itself from Team USA for a 10-1 lead after two periods.

Doan added his second and third goals in a span of just 21 seconds. His second marker of the night came after Luca Fantilli kept a puck in the offensive zone for Doan. The Arizona State University commit pulled off a beautiful backhand-forehand move leaving an empty crease. Doan went back to the front of the net for the hat trick, picking up a loose puck and mustering enough on a shot as he was fading away from the net.

Sean Farrell added his third point of the night with a goal to extend the Steel lead to 6-0. The Hopkinton, Mass., native was the trailer on a play that was set up by Lukas Gustafsson and Coronato. Farrell picked up a pass in the right circle and lit the lamp with a heavy wrister.

Team USA tallied its only power-play goal of the night on the stick of Isaac Howard. Team USA went 1-for-3 (33.3%) with the man advantage on Saturday night.

Middendorf picked the scoring back up for Chicago just 38 seconds after Howard’s marker. The Steel captain lost his defender as he drifted into the right circle, hammering home a one-timer off a pass from Farrell, his fourth point on the night.

The explosive second period concluded with a trio of Steel tallies in a stretch of 91 seconds.

Pasternak was set up on a cross-ice feed from Jack Harvey for his second of the night and third of the season to stretch the lead to 8-1.

Adam Fantilli joined up with Doan in a 2-on-1 rush to beat Team USA netminder Tyler Muszelik for his second goal in as many nights.

Coronato joined the fun with his 16th of the season when he gathered a puck in the right circle and fired a wrister home, netting the 10th goal for Chicago.

Logan Cooley picked up a goal in the third period for Team USA, the only marker by the home team in the final frame.

Jackson Blake capped the scoring for Chicago as Adam Fantilli found his fellow rookie for the marker with 30 seconds remaining in the game.

Chicago’s 11-2 victory was the highest goal total by the Steel since Nov. 22, 2019 when the club notched an 11-5 victory over the Madison Capitols.

Nick Haas set his career-high in saves with 36 stops, improving his record between the Steel pipes to 7-1-0-0 this season.

The Steel travel to Ohio for a Sunday afternoon matchup against the Youngstown Phantoms at Covelli Centre on Jan. 10 for a 3:05 pm CT puck drop to close the weekend.

Chicago returns home to face two Western Conference opponents next weekend. The games on Friday, Jan. 15 against the Des Moines Buccaneers and Saturday, Jan. 16 versus the Waterloo Black Hawks are both scheduled for 7:05 pm CT and are presented by Waubonsee Community College.