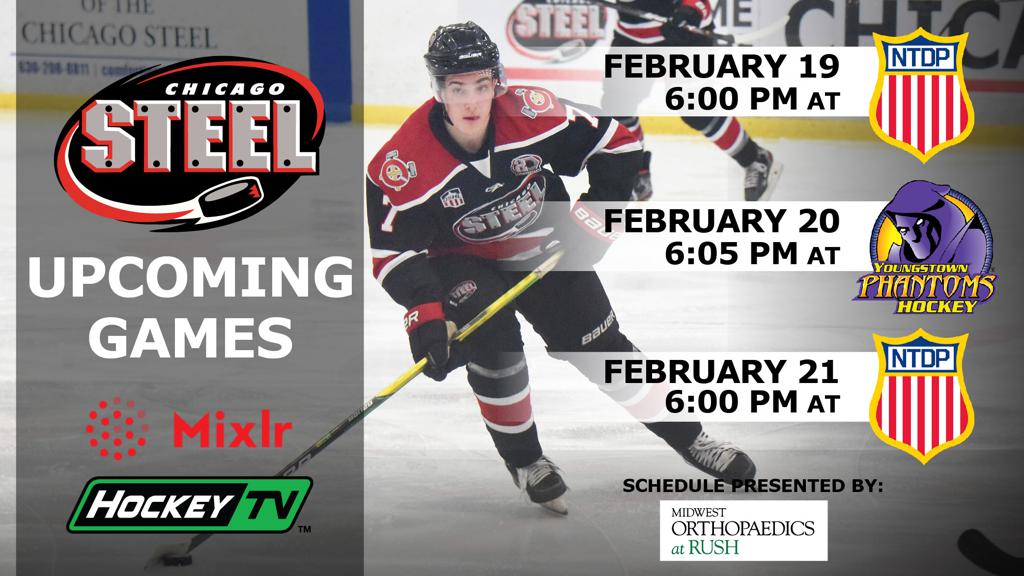 GENEVA, ILLINOIS — After passing the halfway point of the shortened 54-game regular season last weekend, the Chicago Steel hold first place in the Eastern Conference and the best record in the United States Hockey League with a 21-7-2-0 (44 pts.) mark.

The Steel are set to embark on a stretch of eight consecutive road games before the club returns to home ice on March 12.

On Friday, Feb. 19, a highly anticipated matchup against Team USA (U18) kicks off three games in three days in Michigan and Ohio.

Team USA (U18) boasts forwards Chaz Lucius and Sasha Pastujov in addition to defenseman Luke Hughes as projected first-round selections. Pastujov has registered eight points (6G, 2A) in four USHL games this season while Hughes has 13 points (4G, 9A) in 10 games. Lucius has yet to appear in a game for Team USA this season.

Chicago travels to Ohio for a matchup against the Youngstown Phantoms at Covelli Centre on Saturday, Feb. 20 at 6:05 pm CT. In the season series, Chicago holds a 6-1-0-0 mark over Youngstown having completed seven of the scheduled 12 games this season.

The Phantoms leading scorer, Georgii Merkulov has tallied at least a point in all seven games against the Steel this season. Of his 22 points (9G, 13A) in 20 games this season, 10 points (5G, 5A) have come against Chicago.  Heading into the clash against the Steel, the Phantoms will be coming off a back-to-back set against the Muskegon Lumberjacks in Michigan on Thursday and Friday.

The Steel head back to USA Hockey Arena to conclude their weekend with a 6:00 pm CT faceoff against Team USA (U17) on Sunday, Feb. 21. Chicago owns a 2-1-0-0 mark against the U17 club this season including an 11-2 victory on Jan. 9, the highest goal total for the Steel this season.

Forward Frank Nazar III leads Team USA (U17) in points and shares and is fourth among USHL rookies with 19 points (9G, 10A) in 16 games.

The Steel won two out of three games at Fox Valley Ice Arena last week. Chicago topped the Des Moines Buccaneers 5-1 on Thursday, Feb. 11 before defeating the Dubuque Fighting Saints in a thrilling 3-2 overtime win on Saturday, Feb. 13. The Fighting Saints won the weekend finale 4-3 on Sunday, Feb. 14, the first time the Steel lost to Dubuque on home ice since Nov. 26, 2016.

Steel forward Josh Doan picked up a goal and four assists across the three contests, vaulting him into fourth place on the USHL scoring list with 40 points (17G, 23A).