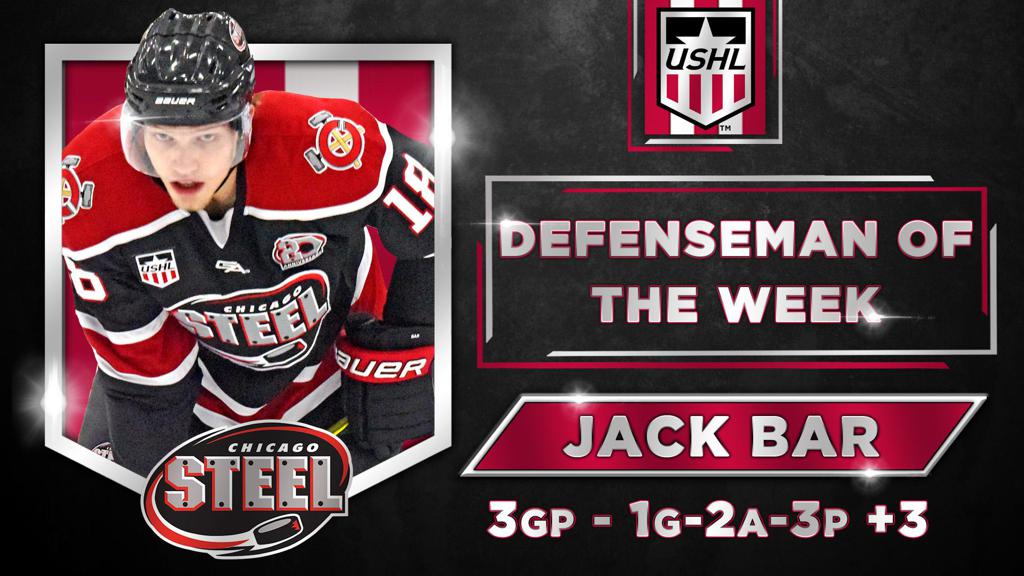 GENEVA, ILLINOIS — Chicago Steel defenseman Jack Bar has been named United States Hockey League Defenseman of the Week for the first time in his USHL career, the league announced Tuesday.

Bar, a Harvard University-bound blueliner, registered an assist in a 3-0 Steel victory against the Green Bay Gamblers on March 12 and charted his second multi-point performance of the season with a marker and a helper in Chicago’s 6-3 win on March 14 over Team USA (U17).

“Jack’s edge and competitiveness has shown through his play thus far,” said Steel associate head coach Matt Deschamps. “Along with his strong defensive play, Jack possesses great offensive instincts and an extremely heavy shot. Jack has provided our team with a high level of play on both side of the puck and this recognition by the league is well deserved.”

Bar was ranked as a ‘B’-level prospect eligible for the 2021 NHL Draft by NHL Central Scouting on both the preliminary watch list and the mid-season watch list released on Jan. 21, 2021.

The Newmarket, Ontario, native becomes the eighth player on the Chicago roster to earn Player of the Week honors this season, joining Ryan Ufko and Jack Babbage as the third Chicago blueliner to be named Defenseman of the Week.

The Steel face off against the Dubuque Fighting Saints in a home-and-home set starting on Friday, March 19 at Mystique Community Ice Center and concluding with a matchup at Fox Valley Ice Arena on Saturday, March 20. Both games are slated for a 7:05 pm CT puck drop.