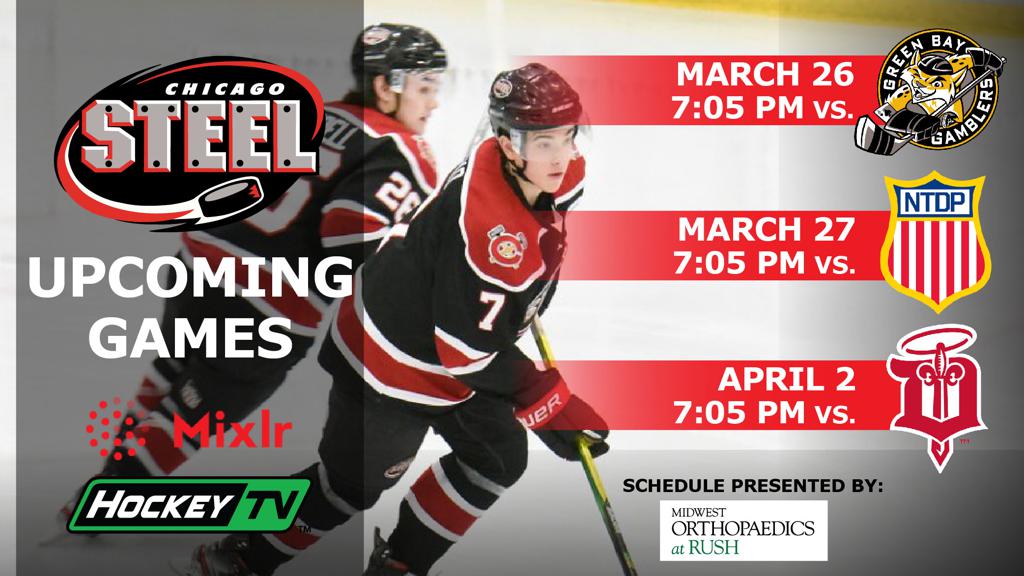 GENEVA, ILLINOIS — For the first time in over a calendar year, the Chicago Steel will play in front of fans at Fox Valley Ice Arena in Geneva, becoming the first Illinois team playing its season under the Governor’s professional sports exemption to host spectators for an indoor sporting event since March 2020.

On March 19, Illinois Governor J.B. Pritzker announced updated guidance for indoor spectator events at 25% capacity.  Under the 25% capacity guidance, the Steel will have the ability to welcome between 600-650 fans per game.

On Friday, March 26, the Steel will unveil the first Anderson Cup banner in franchise history after waiting to be able to celebrate with Steel fans.  The team has kept the regular season championship banner covered throughout the 2020-2021 season as they awaited the opportunity for fans to return to the rink to unveil the banner together.

Just prior to the 7:05 p.m. puck drop on Friday, the team will unveil the championship banner in a brief pre-game ceremony, honoring last year’s record-breaking team.

The Anderson Cup, awarded to the USHL regular season champion, was earned by the 2019-2020 team after finishing with a 41-7-1-0 (83 pts.) record, setting Steel records for regular season wins, win percentage and points earned in a single season.

The last Chicago Steel home game was a 6-5 overtime victory over the Dubuque Fighting Saints on March 7, 2020.

All spectators will be seated in “pods” to allow for distancing between ticketed groups and will be expected to adhere to protocols for the safety of fans, players and staff including temperature checks, masks and social distancing.

Chicago hosts the Green Bay Gamblers on Friday in a matchup of two of the top teams in the Eastern Conference.

The Gamblers (24-13-1-2; 51 pts.) share second place with the Muskegon Lumberjacks, currently 11 points back of the first-place Steel, approaching the final month of the regular season. Green Bay enters the Friday night faceoff on a three-game losing streak, the club’s longest slide season.  The Steel are 6-2-0-0 in eight games against Green Bay this season.

Green Bay defenseman Mason Lohrei returns to the lineup after serving a three-game suspension from March 19-21. The Boston Bruins’ second round selection (#58 overall) in the 2020 NHL Draft is the only non-Steel player in the league with 50 points this season. Lohrei has charted 15 goals and 35 helpers in 37 games played.

Chicago matches up against Team USA (U18) on Saturday, March 27 in the final clash between the two clubs this season. The Steel own a 2-1-1-0 edge in four games against the U18 club this year.

Team USA forward Chaz Lucius, a first-round projected selection in the 2021 NHL Draft, has only appeared in seven games due to injury but has totaled 11 points (7G, 4A) over that stretch including three goals and an assist in two appearances against the Steel.

Chicago swept a two-game set against the Dubuque Fighting Saints last weekend, earning a 7-3 win at Mystique Community Ice Center on Friday, March 19 and defeating Dubuque 3-2 in overtime at Fox Valley Ice Arena the following night. Steel forward Matt Coronato registered six points (3G, 3A) over the series against Dubuque and ranks second in the USHL with 72 points (39G, 33A).