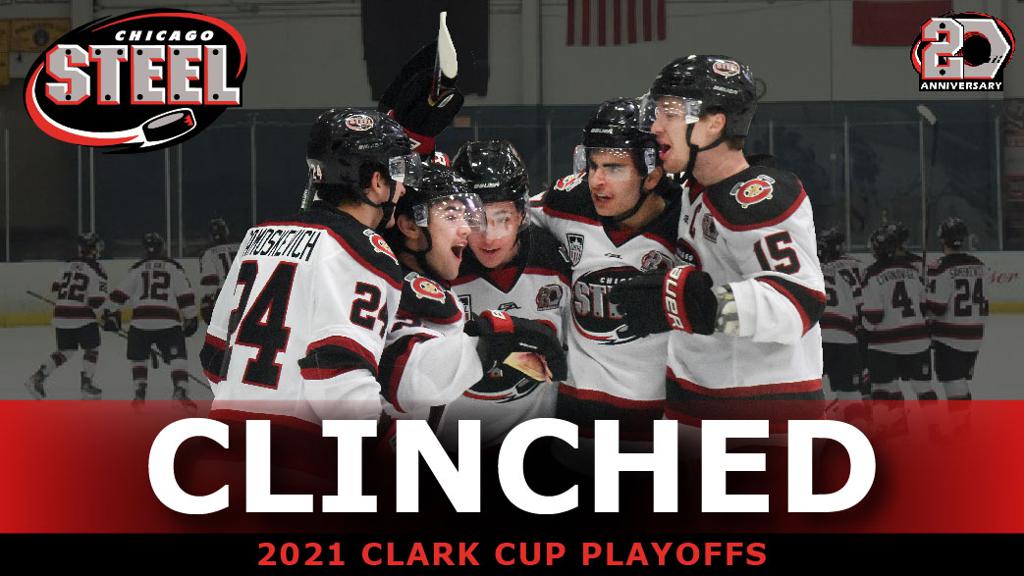 DUBUQUE, IOWA — With a 7-2 win against the Dubuque Fighting Saints on Saturday night at Mystique Community Ice Center, the Chicago Steel (31-11-3-2; 67 pts.) became the first team in the USHL to clinch a berth in the 2021 Clark Cup Playoffs.

The Steel punched their ticket into the postseason for the fifth consecutive season, the longest active streak in the league.

Chicago’s playoff run began in 2016-2017 when the Steel were the top seed in the Eastern Conference and defeated the Youngstown Phantoms, Dubuque Fighting Saints and Sioux City Musketeers to win the first Clark Cup Championship in team history.

The following year, the Steel defeated the Muskegon Lumberjacks in the First Round of the playoffs before falling to Team USA in the Conference Semifinals.

In 2018-2019, Chicago defeated the Cedar Rapids Roughriders and Muskegon Lumberjacks to win the Eastern Conference before losing to the Sioux Falls in the Clark Cup Final.

The playoff streak includes the 2019-2020 season which was canceled prior to the playoffs due to COVID-19.  At the time the season was canceled, Chicago was the only USHL team to have already clinched a playoff spot and the Steel were awarded the first Anderson Cup in team history for winning the regular season championship.

This season, the top four teams from both the Eastern and Western Conference will compete for the Clark Cup with three rounds of postseason series to determine the champion.

The Conference Semifinals will be a best-of-three series with all three contests played at the venue of the higher (better) seed from Friday, April 30 through Sunday, May 2.  The Steel could secure home ice advantage for this round by finishing first or second in the Eastern Conference.

The Conference Finals will be a best-of-three series with either a 1-1-1 or 1-2 format, as chosen by the higher seed, played from Thursday, May 6 through Monday, May 10.

The Clark Cup Final is scheduled to be a best-of-five series with a 2-2-1 format contested from Friday, May 14 through Tuesday, May 25, if necessary.

The Steel return to Fox Valley Ice Arena for a three-game homestand against the Youngstown Phantoms, Friday, April 9 at 7:05 pm CT, Saturday, April 10 at 7:05 pm CT and Sunday, April 11 at 3:05 pm CT.  All three games are presented by McCue Chevy.