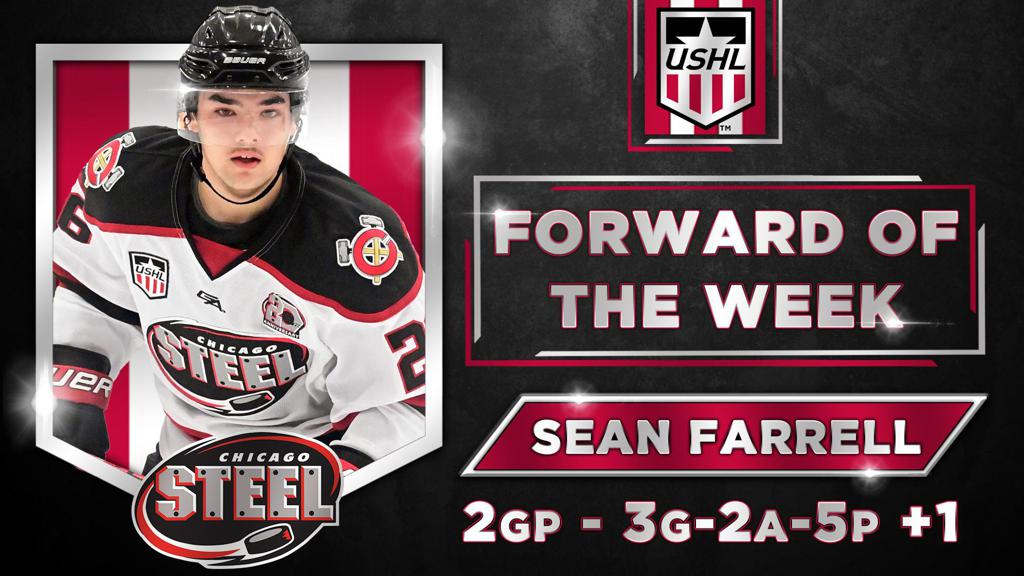 Farrell, selected by the Montreal Canadiens in the fourth round (#124 overall) of the 2020 NHL Draft, registered two multi-point games over a two-game set against the Dubuque Fighting Saints on April 2 & 3. The 5-foot-10, 177-pound skater notched a goal and a helper in a 5-4 loss on Friday and charted two goals and an assist in a 7-2 victory the following night.

In his Friday night performance, Farrell became the most prolific point getter in a single season in Chicago Steel franchise history, passing Andrew Miller (Steel 2007-2009) who posted 82 points (32G, 50A) in the 2008-2009 season.

“It is great to have the league once again recognize Sean’s play,” said Steel head coach Brock Sheahan. “He has consistently played at an elite level, both offensively and defensively all season. His level of play and leadership both on and off the ice pushes our group to continue to get better.”

The Hopkinton, Mass., native now has his sights set on multiple USHL Tier 1 records in the final month of the 2020-2021 regular season.

This is the 10th time a Steel player has earned Player of the Week honors this season. At least one skater from Chicago has earned the weekly honor in nine of the 22 weeks of the regular season thus far.

The Steel host the Youngstown Phantoms for a three-game homestand at Fox Valley Ice Arena on April 9, 10 & 11 highlighted by Military Appreciation Night on Saturday with a special jersey auction to benefit Wounded Warrior Project presented by McCue Chevy.