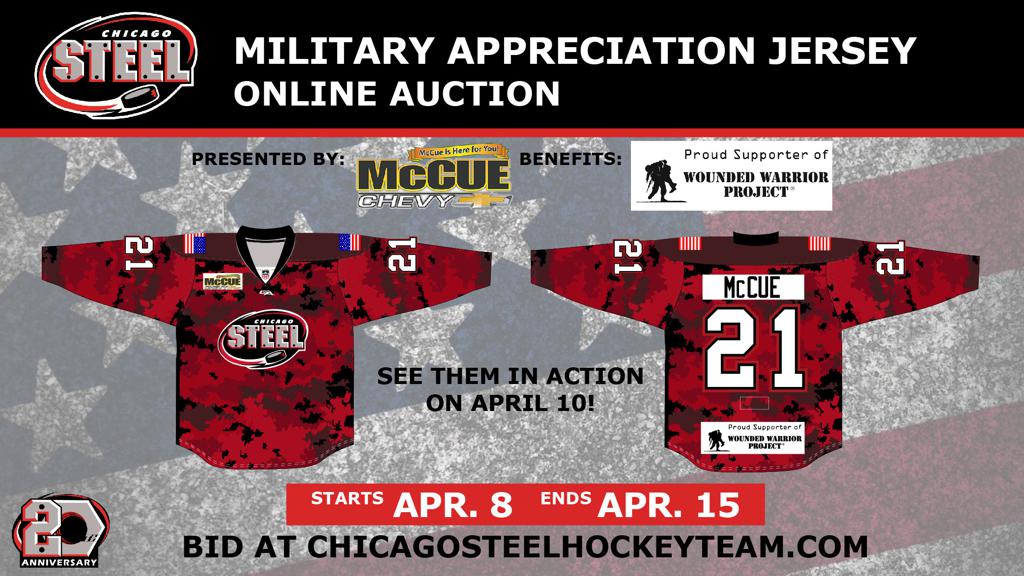 GENEVA, ILLINOIS — For the second consecutive season, the Chicago Steel have partnered with McCue Chevy to host a special Military Appreciation jersey auction with proceeds to benefit Wounded Warrior Project.

The week-long auction is scheduled to begin on Thursday, April 8 and run through Thursday, April 15. Fans can bid on game-worn jerseys for the entire Steel roster and Rusty’s jersey at: https://bit.ly/3dBOMO9.

The playoff-bound Steel will wear the specially designed jerseys on Saturday, April 10 on home ice on Military Appreciation Night presented by McCue Chevy highlighting a three-game weekend series against the Youngstown Phantoms Friday, April 9 through Sunday, April 11 . Jerseys will be autographed by the player and shipped to winning bidders.

The eye-catching jerseys feature a unique camouflage pattern with red, black and gray behind the Steel crest on the chest. American flags are on both shoulders with the Wounded Warrior Project logo located on the back of the jerseys, below the white numbers outlined in red and black. McCue Chevy patches are included on the right side of the chest as presenting sponsor of Military Appreciation Night.

Leading up to Saturday’s game, the Steel are telling the stories of Warriors on the team’s social media feeds, spotlighting a different Warrior each day.   Founded in 2003, Wounded Warrior Project (woundedwarriorproject.org) is a 501(c)3 non-profit that provides programs and services to veterans and service members who incurred a physical or mental injury, illness or wound while serving in the military on or after September 11, 2001.

McCue Chevy, a Steel partner since 2015, approached the Steel prior to the 2019-2020 season with the idea of organizing a special event to benefit Wounded Warrior Project.

“McCue Chevy is proud to partner with the Chicago Steel for our 6th season” said Tim McCue, Owner, and Tobin Oberhouser, General Manager of McCue Chevy. “In addition, we have been happy to partner with both the Steel and the Wounded Warrior Project for our second year in raising awareness and continued funding in support of our brave men and women who give us the liberties and freedom we enjoy. Through their sacrifice, we are able to enjoy pastimes like cheering on our favorite hockey team! We look forward to another great event with the Steel and another outstanding fundraising campaign during Military Appreciation Night to show our support for our heroes!”

Last season, despite Hometown Heroes Night being cancelled due to COVID-19, Chicago Steel fans came together to raise more than $8,000 to benefit Wounded Warrior Project through an online jersey auction. Of the 24 Chicago Steel jerseys available for auction, eight were purchased for the “buy it now” maximum of $500.

“McCue Chevy has been an outstanding partner of the Steel since our move to the Fox Valley Ice Arena in 2015,” said Steel President Dan Lehv.  “Their sponsorship has continually centered around community initiatives as highlighted by their dedication to raise funds for Wounded Warrior Project.  We are proud to support Warriors in our area through this collaboration.”

Chicago (31-11-3-2; 67 pts.) enters the weekend against Youngstown (9-25-4-2; 24 pts.) with a 7-1-0-0 mark in eight matchups during the 2020-2021 regular season series. The Phantoms enter the weekend playing in their third consecutive three-game weekend on the road. Youngstown last played March 25-27, earning three out of a possible six points against the Muskegon Lumberjacks at Mercy Health Arena in Michigan.

Ryan Ufko has charted 12 points (3G, 9A) in eight appearances against the Phantoms, the most of any Chicago defenseman in the season series against Youngstown. Ufko shares second among league blueliners with 36 points (10G, 26A) in 47 games played this season.

Steel forward Sean Farrell was named USHL Forward of the Week for the second time this season, charting five points (3G, 2A) over two games last weekend while becoming the Steel single-season leader in points, passing Andrew Miller (Steel 2007-2009) who registered 82 points (32G, 50A) during the 2008-2009 season. Farrell now leads the USHL with 87 points (28G, 59A) in 46 games played.

Phantoms forward Georgii Merkulov has reached the scoresheet in six consecutive matchups including four multi-point performances over that stretch. The native of Ryazan, Russia was held scoreless in the most recent game between the Steel and Phantoms on Feb. 20, a 5-4 overtime victory for the Steel. Prior to that clash, Merkulov had factored in for at least a point in seven straight games against Chicago with 10 points (5G, 5A).