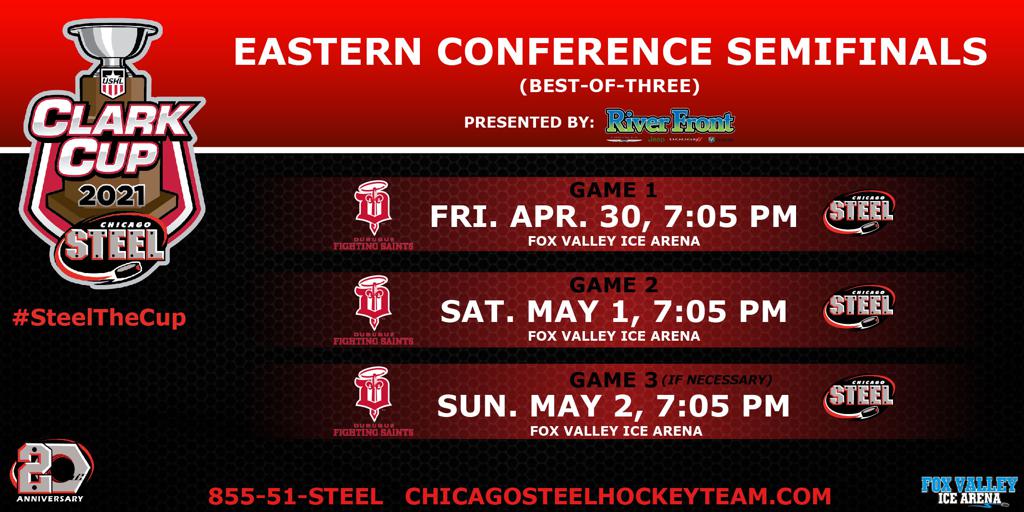 GENEVA, ILLINOIS — After capturing the second Anderson Cup in as many seasons as USHL regular season champions, the Chicago Steel start the 2021 Clark Cup Playoffs with a best-of-three matchup against the Dubuque Fighting Saints, the fourth seed in the Eastern Conference, this weekend at Fox Valley Ice Arena.

Game 1 is slated for Friday, April 30 while Game 2 is set for the following night, Saturday, May 1. Game 3, if necessary, is scheduled for Sunday, May 2. All games will start at 7:05 pm CT at Fox Valley Ice Arena.

In the regular season, the Steel recorded a 5-2-1-0 record against the Fighting Saints including a 2-2-0-0 mark on home ice. Chicago outscored Dubuque by an average of 4.00 goals for to 2.63 goals against per game although the Fighting Saints averaged three more shots per game (29-26) than Chicago.

Chicago’s top scorers, Sean Farrell and Matt Coronato each racked up double digits in points in the eight matchups against the Fighting Saints. Farrell, a Montreal Canadiens’ prospect, tallied 13 points (3G, 10A) while Coronato registered 12 points (8G, 4A) which included a five-point game (3G, 2A) on March 19 in a 7-3 victory.

Dubuque is led by top scorer Robert Cronin who registered 53 points (28G, 25A) in 48 games played this season. The Plymouth, Mass. native totaled five points (3G, 2A) in eight games against the Steel.

Stephen Halliday and Andrei Buyalsky each matched Cronin with five points against the Steel. Halliday, a third-year USHL veteran, notched a goal and four helpers while Buylasky, a University of Vermont commit, reached the scoresheet in five of his six outings against Chicago, charting four markers and an assist.

Mid-season acquisition Matthew Savoie led the Fighting Saints with 1.12 points per game in just 34 appearances but was held to just two points (1G, 1A) in six contests against the Steel.

Dubuque netminder Lukas Parik started the majority of games in net for the Fighting Saints, sporting a 3.35 goals-against average and an .867 save percentage in 28 performances.

The Steel are in pursuit of the second Clark Cup in franchise history. Chicago won its first title in 2017 against the Sioux City Musketeers and returned to the Clark Cup Final in 2019 but fell to the Sioux Falls Stampede.

Last season, the Steel held the best record in the USHL and were the only team to qualify for the playoffs when the season was canceled in March due to the COVID-19 pandemic.  At the time, Dubuque was in second place in the Eastern Conference.

Tickets for the Eastern Conference Semifinals start at just $10 and fans are encouraged to purchase in advance due to limited 25% spectator capacity by calling 855-51-STEEL or visiting ChicagoSteelHockeyTeam.com. On game day, the Steel Box Office at Fox Valley Ice Arena will open at 10 a.m.  The Steel’s exclusive ‘Pay as We Play’ program is still available for fans to guarantee seating and pricing for all possible home playoff games at Fox Valley Ice Arena.