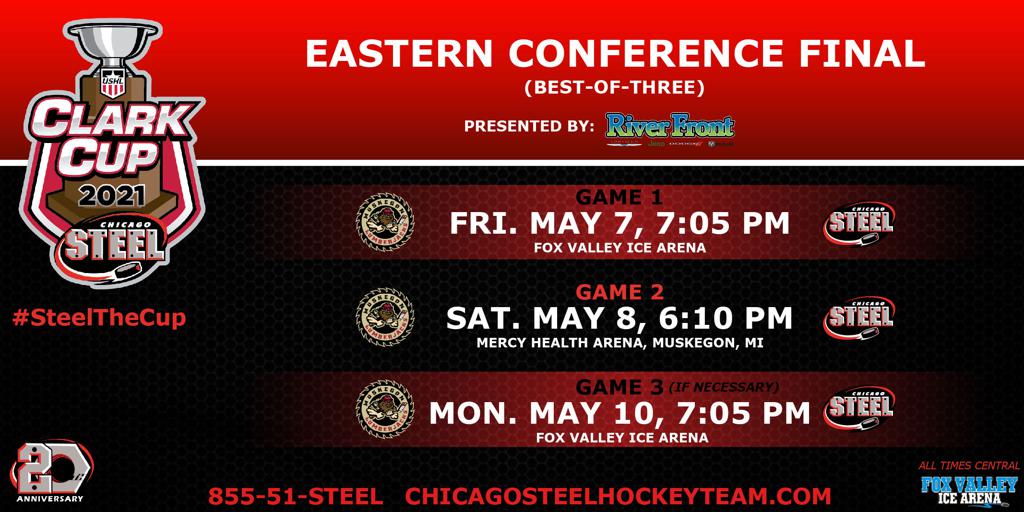 GENEVA, ILLINOIS —The Chicago Steel, entering the postseason as the league’s #1 overall seed, swept the Dubuque Fighting Saints 2-0 in the best-of-three Eastern Conference Semifinals and will advance to face the #2 seed Muskegon Lumberjacks in the Eastern Conference Final starting on Friday, May 7.

Chicago battled Muskegon to a 5-4-1-0 record in ten meetings during the regular season with a 3-2-0-0 mark on home ice and a 1-2-1-0 record at Mercy Health Arena in Michigan.

Steel forward Matt Coronato leads all USHL skaters with six points (3G, 3A) in two games during the 2021 Clark Cup Playoffs. The USHL’s leading goal scorer during the regular season with 48 tallies, Coronato sits atop the same list in the postseason with three markers.

Danil Gushchin, selected by the San Jose Sharks in the third round (#76 overall) of the 2020 NHL Draft, paced the Lumberjacks with 64 points (32G, 32A), the most of any non-Steel player in the USHL this season. The Russian forward registered 23 points (12G, 11A) in nine appearances against the Steel, including three separate hat tricks during the 2020-2021 regular season.

This will be the third time Chicago and Muskegon have met in the Clark Cup Playoffs. In 2018, the Steel won a best-of-three First Round series in Muskegon with an overtime victory in the third and deciding game.  The Steel defeated the top-seeded Lumberjacks three games to one in the best-of-five 2019 Eastern Conference Final, advancing to the club’s second Clark Cup Final appearance in franchise history.

Tickets are on sale now for the Eastern Conference Final and fans are encouraged to purchase in advance due to 25% spectator capacity based on current state guidelines.

Tickets start at just $10 and are on sale now by calling 855-51-STEEL, visiting ChicagoSteelHockeyTeam.com or at the Steel Box Office open at 10 a.m. on the day of each home game.