Get to Know: #8 Dylan Robbins and Dr. Jorge Chala 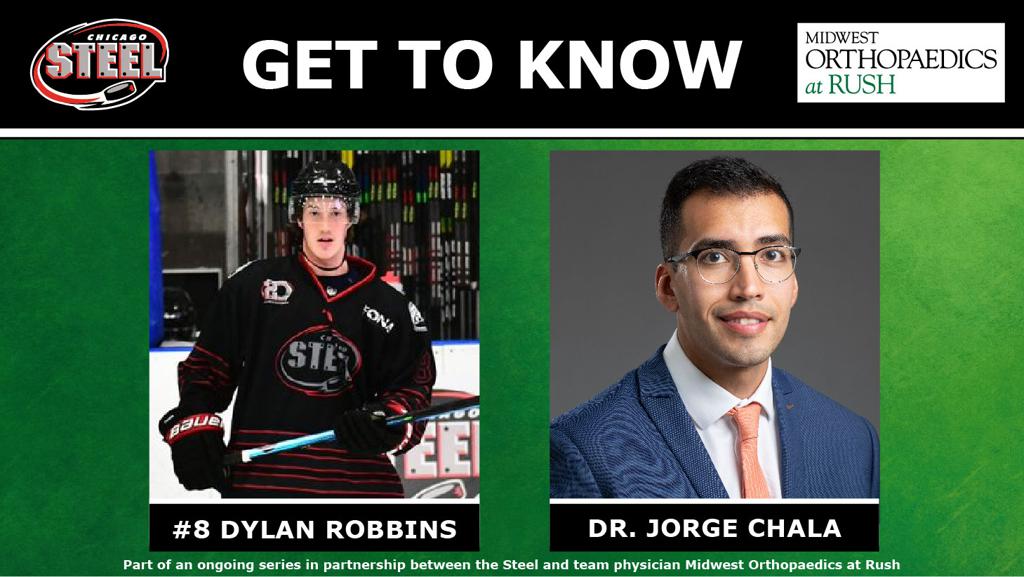 What have been the biggest factors in helping you adjust to your first season in the USHL?

I think working in the weight room with (Steel Director of Performance and Sport Science) Bobby Lucas has been super-helpful for gaining strength and putting on some more muscle. Getting used to the speed of the game, it’s been working with the coaches and getting familiar with these high-level players. Keeping up in practice and games has been an adjustment but I think I’ve improved a lot throughout the season.

Let’s go back to your first goal. Do you remember the feeling before that shift and what happened on the play?

It was just another shift, I was trying to do whatever the team needed from me by working hard and keeping it simple. I found myself pretty open in front of the net, Josh Doan found me and I got a little lucky slipping it five-hole but I’ll take it however it comes. I was jacked up to get the first one and it was an incredible feeling.

A Steel alum, John Jaworski, just finished up his first season at Sacred Heart University where you’re committed. Have you gotten a chance to make a connection with him yet?

We actually haven’t skated much together but I was able to come here and practice for a week last year and it was nice to be able to get to know another guy going to Sacred Heart. We had a few good conversations and I’m looking forward to seeing him again at Sacred Heart.

Circumstances in college hockey during the pandemic led to your brother Adam coming back to play with the Steel this season. What has that been like, playing with him for a full year?

It’s been really cool. I played in the same organization as Adam with the North Jersey Avalanche growing up but never played for the same team until this season. It’s been awesome getting to live with him for one more year away from home. It’s different scenery but having someone like him who’s familiar is always nice.

Where did you grow up?

I am from a very small province in Argentina called Tucuman

What sports or activities did you participate in as a child?

I played rugby and made it to the under 18 and 20 national rugby team.

What university did you attend?

I attended the University of Tucuman.

What drew you to working in healthcare?

It was being able to get people back to what they love to do.

What part of your job do you most enjoy?

I most enjoy working with my team, seeing patients happy and hearing about their comeback stories.

Do you have a favorite NHL/pro sports team?

What is your favorite thing about working for Midwest Orthopaedics at Rush?

My favorite thing is the environment, research and opportunities to innovate and advance the field of orthopedics.

Team Physicians to the Chicago Steel