GENEVA, ILLINOIS — The 2021 Clark Cup Champion Chicago Steel built the roster for the team’s future on Wednesday night during Phase 1 of the 2021 USHL Draft, selecting 10 players from the 2005 birth year.

Chicago stockpiled six forwards, three defenseman and one netminder on the first day of the two-day USHL Draft.

“This was a very difficult scouting year but (Assistant GM) Noëlle Needham and her staff did a tremendous job identifying players who fit the Chicago Steel mold,” said Steel General Manager Ryan Hardy. “We’re extremely happy with the players we selected today and we are also thrilled to have acquired three 2022 Phase 1 picks by virtue of trading back throughout the day.”

Chicago selected forward Ben Yurchuk, a forward from Montreal, Quebec, with the ninth pick in the first round. Playing for the North Jersey Avalanche 16U AAA team during the 2020-2021 campaign, the 5-foot-10, 168-pound skater registered 11 points (4G, 7A) in 12 appearances, helping the Avalanche to the USA Hockey Tier 1 U16 National Championship.

After completing a trade with the Tri-City Storm, the Steel moved the #24 overall pick in the second round in exchange for a third round pick (#40 overall), a fifth round pick (#70 overall) and a 2022 Phase 1 pick in the seventh round coming back to Chicago.

With the first of back-to-back selections in the third round, the Steel chose Nathan Murray with the 39th overall selection and Miles Roberts with the 40th pick.

Murray, a forward from Fowlerville, Mich., charted a goal over four games played for HoneyBaked 15U AAA.

The Steel took another forward off the board with the team’s only selection in the fourth round. Harper Searles was chosen at #55 overall, a skater from Blaine, Minn. In 10 games for Centennial High in Circle Pines, Minn., the 5-foot-8, 161-pound skater registered 11 points (6G, 5A) in his first year with the team.

Following the trade, Chicago made the #73 overall pick in the fifth round, taking forward Aidan Dyer off the board. The 5-foot-4, 119-pound forward posted just over a point per game with 61 points (13G, 48A) in 60 games played for Fox Motors 15U AAA during the 2020-2021 campaign. His 48 helpers paced the team while his 61 points ranked second on the club.

The Steel run on forwards came to an end in the sixth round when the team selected defenseman Olivier Beaulieu with the #81 overall pick. A Terrebonne, Quebec, native, Beaulieu was limited from registering any stats for College Esther-Blondin Phenix in Quebec this season. During the 2019-2020 season, the blueliner posted 14 points (5G, 9A) in 22 outings for Laurentides Conquerants Bantam AAA team, sharing the points lead among defensemen.

With the next selection, Chicago selected another defenseman from Quebec. Beck Majdell was taken with the #118 overall selection in the eighth round. Majdell, a 5-foot-11, 170 pound blueliner, was also limited from action this season but led the Montreal Nationals Bantam AAA program among defenseman with 17 points (4G, 13A) in 24 appearances.

Chicago rounded out its Phase 1 draft with a third consecutive defenseman in Ryan DeAngelis and a final forward in Tyler Chan, with back-to-back selections in the 10th and final round.

The #148 overall pick, Tyler Chan, paced Burnaby Winter Club Prep in points with seven (4G, 3A) in four games. Chan, a 5-foot-7, 141-pound skater, was teammates with Grayden Slipec, selected in the second round.

The Chicago Steel captured the club’s second Clark Cup title in franchise history with a 3-1 victory against the Fargo Force on May 22, 2021 at Scheels Arena in North Dakota, completing the 3-1 victory in the best-of-five championship series. 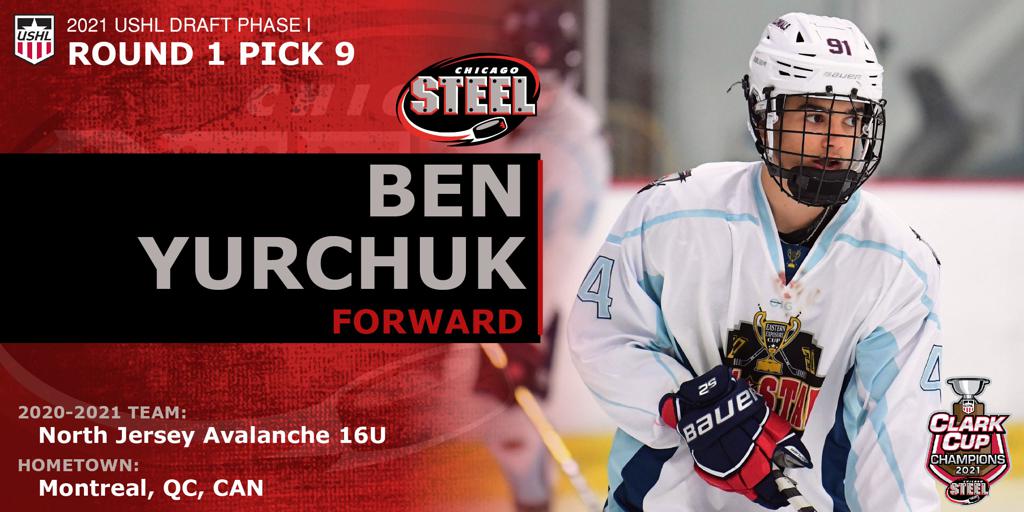 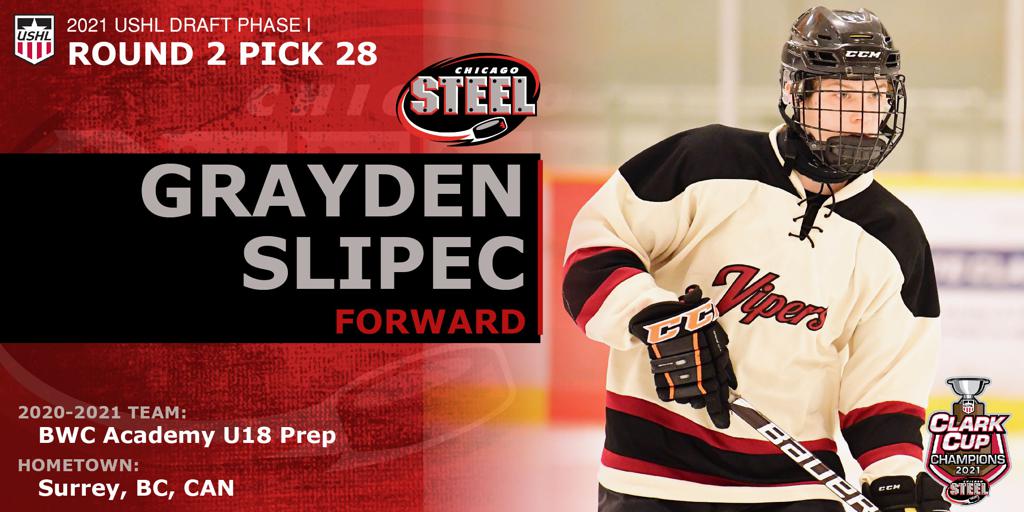 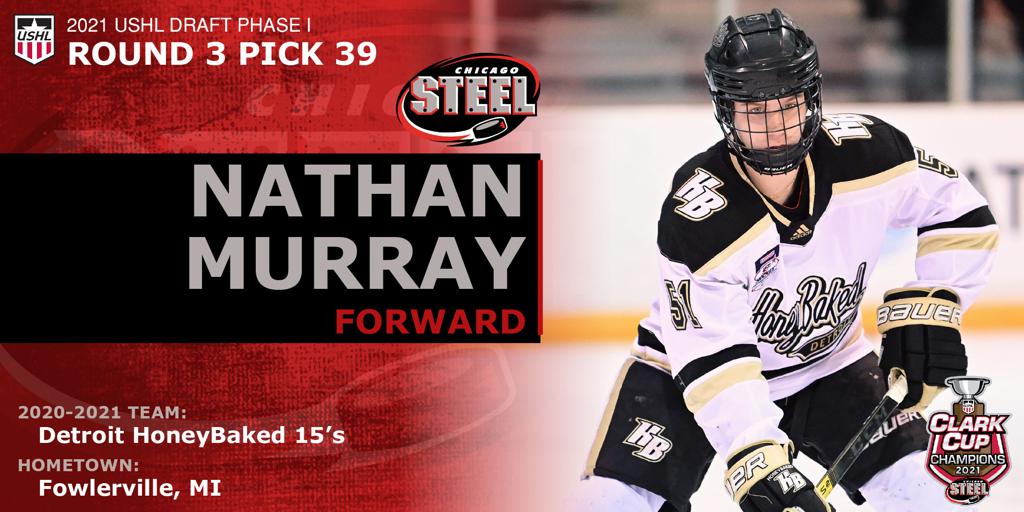 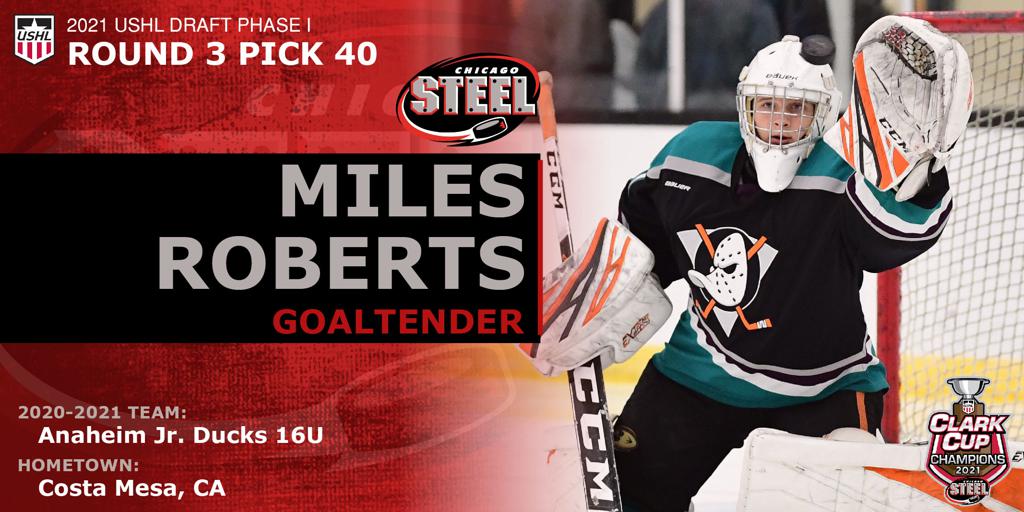 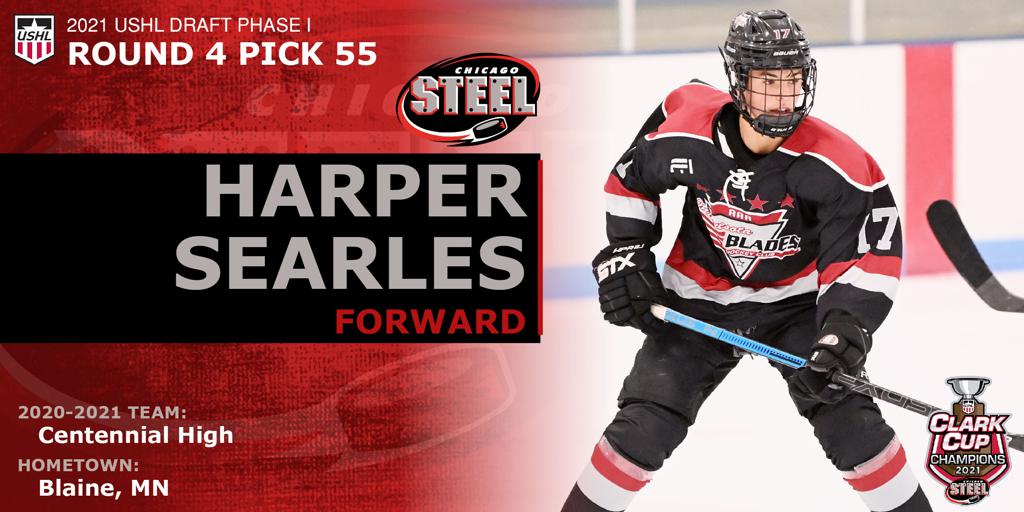 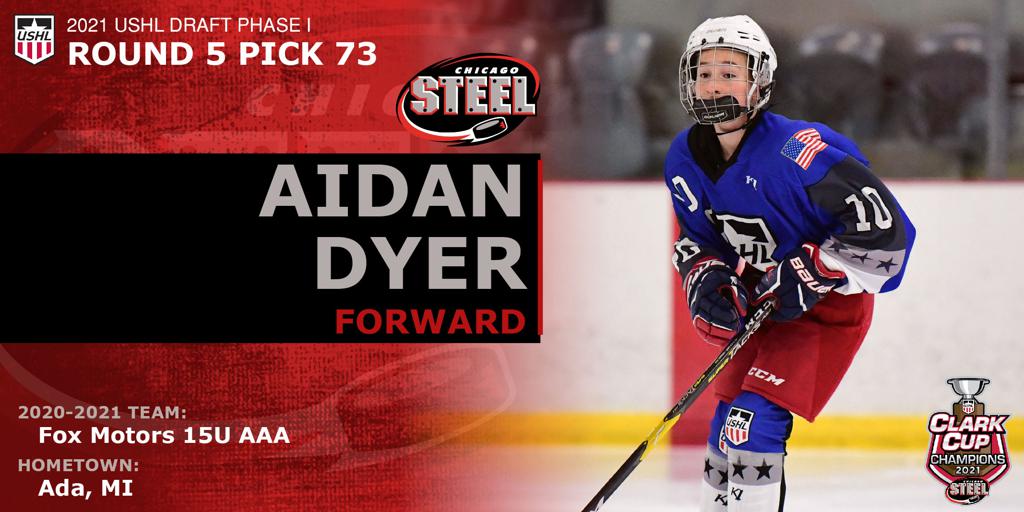 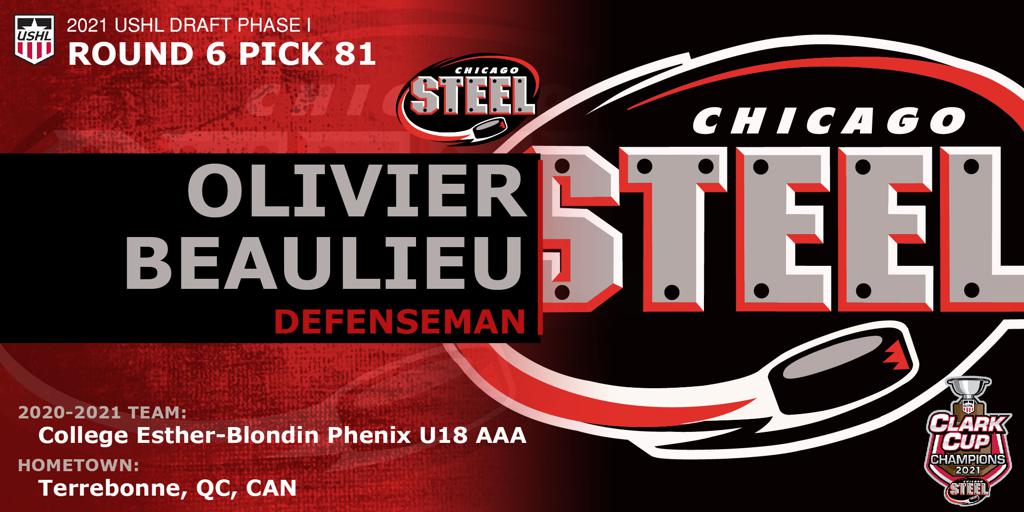 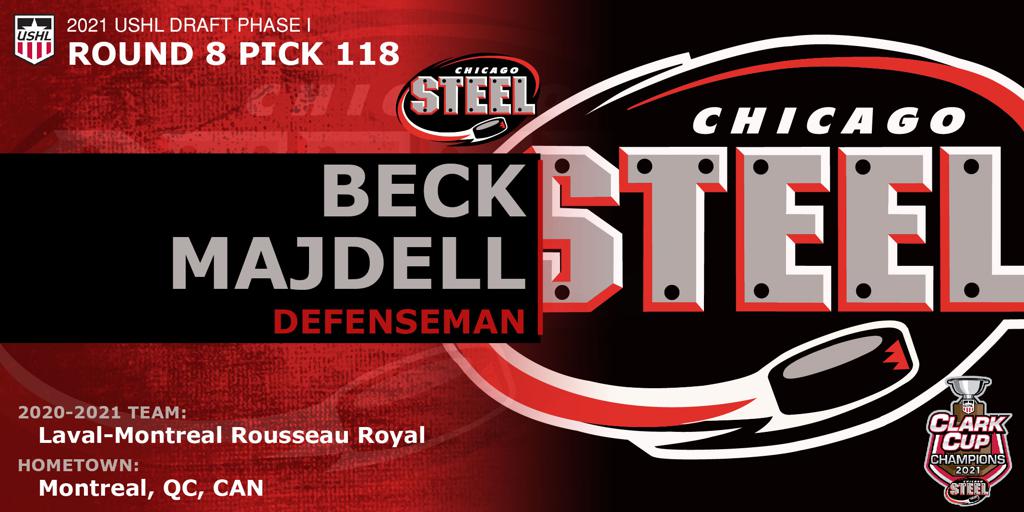 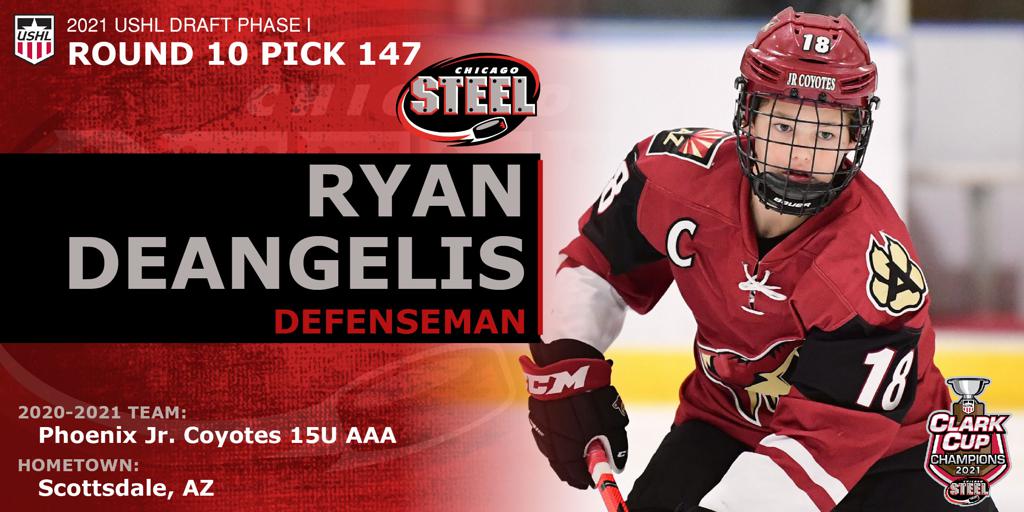 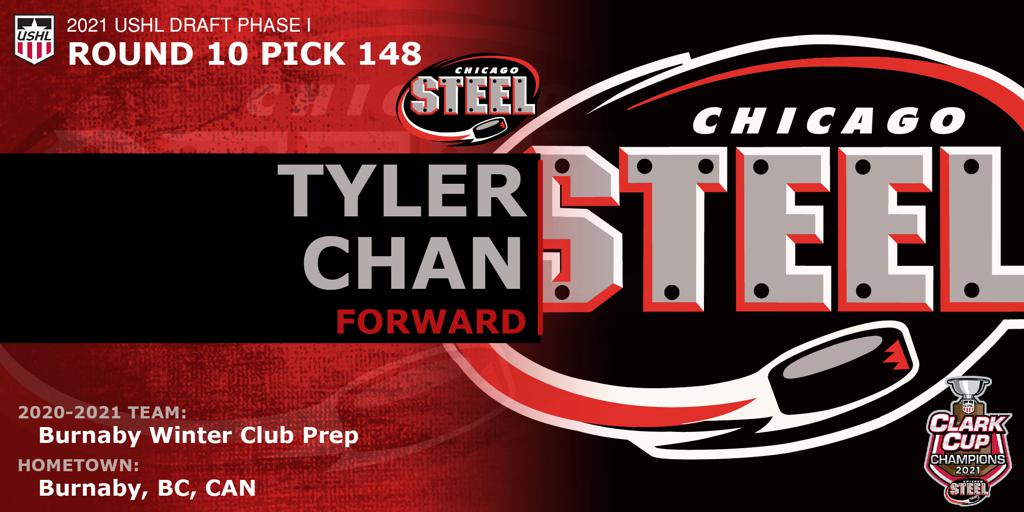