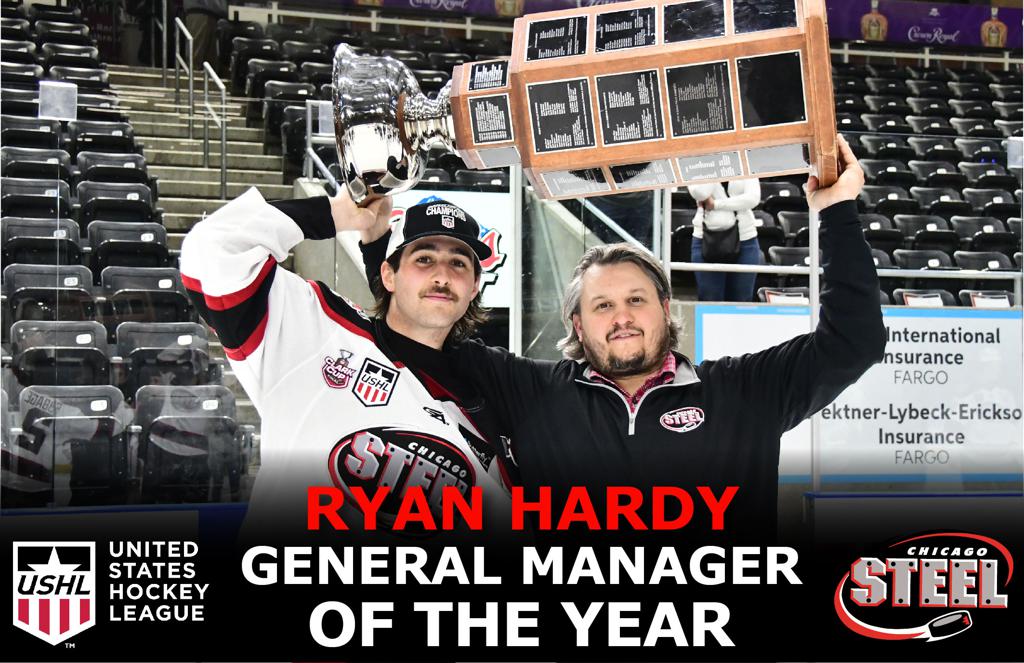 GENEVA, ILLINOIS — Chicago Steel general manager Ryan Hardy has been named GM of the Year in the United States Hockey League, as voted on by his peers, the league announced Friday.

“While Ryan’s feisty competitive spirit, keen eye for talent and absolute commitment to player development are well known, I am most impressed by Ryan’s humanity, patience and mentorship with our staff, players and families away from the ice,” said Steel Owner Larry Robbins.  “In a year filled with unimaginable turmoil and strife in the world around us, I applaud the USHL on providing a safe and productive environment for all players to elevate, and on behalf of the Steel team and family I congratulate Ryan Hardy on once again earning the recognition of his peers as USHL General Manager of the Year.”

This is the second time in three seasons Hardy has earned the yearly award. The Madison, Conn., native was awarded GM of the Year after the 2018-2019 campaign, his first with the team. Hardy becomes the ninth general manager in USHL history to win multiple GM of the Year awards since the inception of the honor after the 1982-1983 season.

“Awards for a manager are truly a reflection of an entire department far more than any one individual,” said Hardy. “This department has collectively built the finest development environment for junior-aged hockey players anywhere in the United States, and perhaps, the entire world.  I’m grateful for the contributions that our scouting staff, development team, coaches, and players have made over the past three seasons.  I’m especially blessed to work alongside Brock Sheahan, an incredible coach, who has led our team to a Clark Cup, two Anderson Cups, and countless league and team records, all while representing our organization to the highest levels of intelligence and integrity.  Any personal accolades that I garner belong to him, his staff, and our players.”

Over Hardy’s three seasons at the helm of constructing and maintaining the roster, the Steel have compiled a record of 116-39-8-2 with a winning percentage of .733, the best marks in the USHL in that stretch.  The success includes the 2021 Clark Cup Championship and the 2020 and 2021 Anderson Cup Championships awarded to the team with the best regular season record.  Additionally, the Steel qualified for the Clark Cup Final by winning the Eastern Conference in 2019 and 2021.  The 2019-2020 Steel set the USHL record for highest winning percentage (.847) and highest goals per game average (4.94) before the season was cut short due the COVID-19 pandemic.

Since his first season with the Steel, Hardy has overseen 10 Steel alumni selected in the NHL Draft, including five from the 2019-2020 roster, the most of any independent junior team in the world that season.