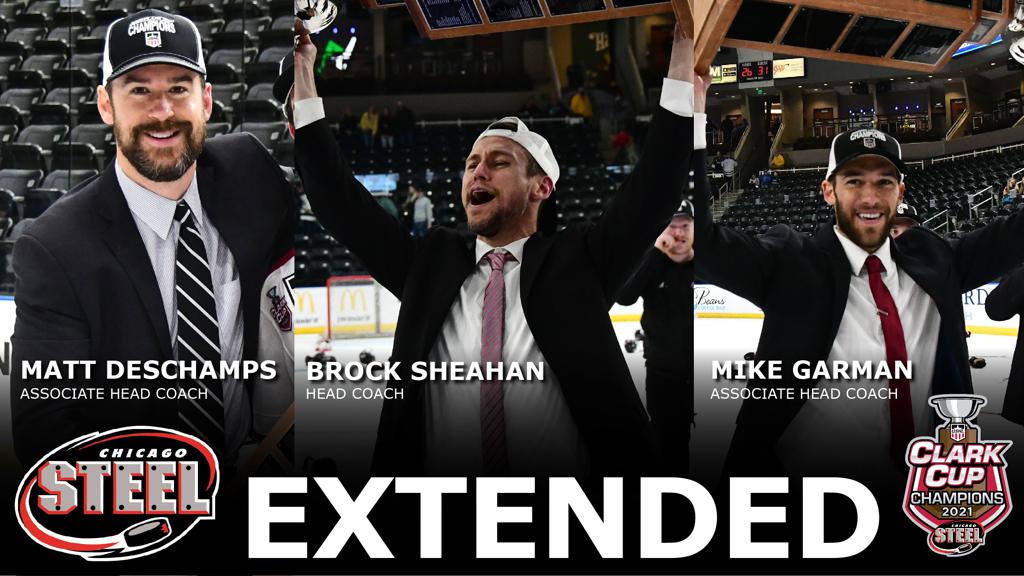 “On and off the ice, Brock, Mike and Matt have exemplified the Steel culture of passion and purpose, bringing joy and optimism to the rink each day and relishing in their roles as educators, motivators and role models,” said Steel owner Larry Robbins.   “We are committed to their long-term professional growth and development, and above all are committed to continue to build the development culture, style of play and competitive intensity that have led to successful outcomes for our players on the ice, in the draft, in college and in their professional endeavors.”

With the trio of Sheahan, Garman and Deschamps behind the bench, the Steel captured the 2021 Clark Cup Championship, following the team’s second consecutive Anderson Cup as USHL regular season champions. After the cancellation of the remainder of the 2019-2020 regular season, Chicago was awarded the first Anderson Cup in franchise history with the three coaches guiding the team to a 41-7-1-0 record, the highest winning percentage (.847) of any team in USHL history.

Sheahan, a native of Lethbridge, Alberta, was named head coach of the Steel on December 1, 2019, his first career head coaching position, after being hired as associate head coach prior to the 2018-2019 campaign. He took over for Greg Moore who was hired mid-season by the Toronto Maple Leafs to become head coach of the AHL’s Toronto Marlies.  In Sheahan’s tenure as bench boss, the Steel have compiled a 79-18-4-2 record in the regular season, the most wins in the USHL during that stretch.

Prior to being named Head Coach, Sheahan served as Steel Associate Head Coach during the team’s Clark Cup Final run in 2018-2019.  The Steel have signed Sheahan to an extension through the 2023-2024 season.

“My family and I feel very fortunate to be a part of the Steel Family long-term," said Sheahan. "I want to thank Larry Robbins for the opportunity to continue to develop our young men as both players and people. The last three years have been amazing, and I feel so fortunate to get the opportunity to continue to grow what we have built. We have an amazing foundation here with our ownership, support staff, hockey staff and, most importantly, our players. There is not a better place to be in junior hockey.”

Sheahan joined the Steel from the College of the Holy Cross (Worcester, Mass.), where he spent four seasons, including two as Associate Head Coach.

The former defenseman started his coaching career at his alma mater, the University of Notre Dame, where he spent one season as a volunteer coach. He helped lead the Fighting Irish to a 23-15-2 record and a spot in the NCAA Tournament.

Garman, the longest-tenured member of the Steel coaching staff, joined the club prior to the 2017-2018 season, assisting in all aspects of coaching, including working with the team’s goaltenders. In his time with Chicago, Garman has had a hand in five of the seven USHL banners, the 2021 Clark Cup Championship, the 2021 and 2020 Anderson Cup titles and the 2018-19 and 2020-21 Eastern Conference Championships. The former netminder played college hockey for Cornell University (ECAC) before embarking on a three-year professional career, including stops in the ECHL, CHL, Get Ligan (Norway), Division I (Sweden), and Magnus League (France). He played junior hockey for the Springfield Jr. Blues (NAHL) and Nanaimo Clippers (BCHL).

Deschamps was hired on January 16, 2020 as assistant coach and was promoted to Associate Head Coach during the 2020 offseason. The Poughkeepsie, N.Y., native primarily works with the team’s defensemen. Prior to joining the Steel, Deschamps spent three years in Canton, N.Y., working for St. Lawrence University (ECAC) as an Assistant Men’s Ice Hockey Coach. Prior to SLU, Deschamps lived in Salzburg, Austria and worked for EC Red Bull Salzburg (RBS) Hockey Club as the head coach of the RBS U18 team and served the club in director and development coordinator roles as well.

Nitsche joins the Steel as Director of Performance and Sport Science after most recently serving as a head performance coach with GVN Performance where he trained and monitored NHL, AHL, ECHL, and NCAA athletes across various sports. He is a certified trainer through the National Academy of Sport Medicine, a certified mobility specialist through the Functional Anatomy system, as well as an ELDOA Trainer. Nitsche also spent time as a strength coach at High Performance Training in Skokie, IL and was a Rehabilitation Aide at Athletico Physical Therapy. Nitsche, a Chicago, IL native, earned his Bachelor of Exercise Science and Nutrition at Roosevelt University in Chicago.