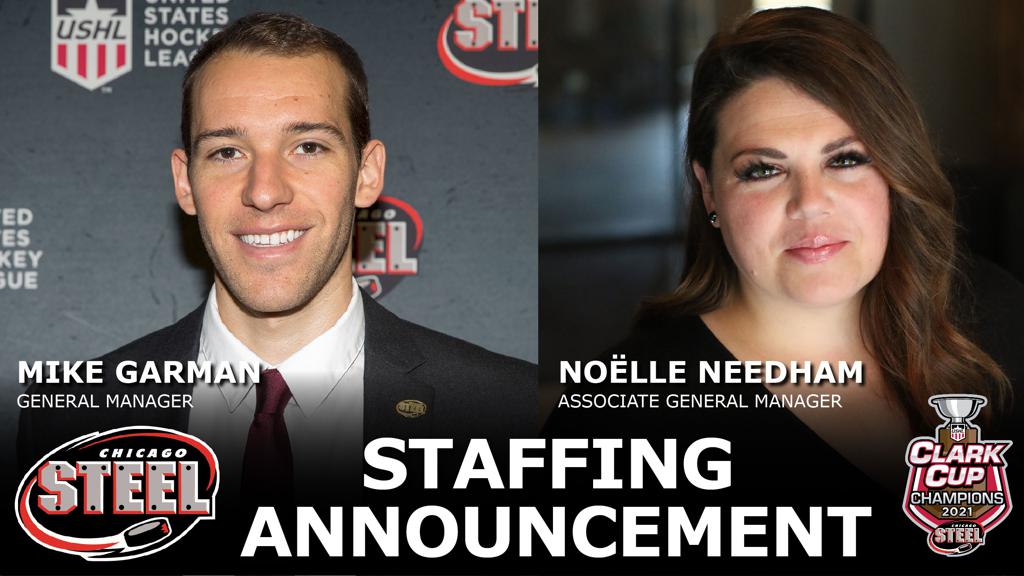 GENEVA, ILLINOIS — The 2021 Clark Cup Champion Chicago Steel today announced that Mike Garman has been named the club’s General Manager and Noëlle Needham has been elevated to Associate General Manager.

Garman, who will enter his fifth season with the organization in 2021-2022, most recently served as Associate Head Coach for the team and has played an integral role in the team’s success during his tenure.  Needham will begin her second season with the Steel after joining the club from the Toronto Maple Leafs organization prior to the 2020-2021 season.

“Today we are moving from strength to strength with Mike and Noëlle leading our hockey operations forward,” said Steel owner Larry Robbins.  “Mike Garman is a brilliant hockey mind, a joyous competitor and a passionate culture builder who is uniquely positioned to lead our continuous pursuit of excellence in junior hockey as the next General Manager of the Chicago Steel.  Through his attention to detail, innate positivity and genuine commitment to each and every player who has worn a Steel jersey during his coaching tenure, Mike will extend our commitment to player development across the continuum of on-ice skill development, strength nutrition and conditioning, offensive and special teams strategies and analytics, mental preparation and hockey IQ development and the academic and billet experience.”

In his new role, Garman will oversee the team’s hockey operations department with a focus on player development. In addition to shaping the player experience, Garman’s responsibilities include the management of the Steel coaching staff, support staff and partnerships as well as overseeing the Steel roster and affiliate list. Garman will serve as the key point person with the USHL and all other member clubs for all hockey related matters. Garman replaces former Steel general manager Ryan Hardy who was hired by the Toronto Maple Leafs on June 25, 2021.

“I want to thank Larry Robbins, Dan Lehv, and the entire Steel organization for this opportunity. Together, we are committed to building the premier development program in junior hockey and I’m incredibly grateful to help lead these efforts as General Manager,” said Garman. “Our coaching staff, led by Brock Sheahan, works tirelessly to teach our players the skills and habits they need to be successful, not just with the Steel, but in their collegiate and pro careers as well. I’m appreciative for the mentorship I received from Ryan and I’m also fortunate to work with outstanding partners such as Belfry Hockey and Molliteum to provide our players with customized programs to enhance and maximize their unique skills. As General Manager, my goal is to continue to grow the highly successful approach we have developed in Chicago while further innovating to provide a world-class development experience for our players.”

A native of Vail, Colo., Garman began his tenure with Chicago prior to the 2017-2018 season assisting in all aspects of coaching, including working with the team’s goaltenders. In his time with the Steel as Assistant Coach and Associate Head Coach, Garman had a hand in five of the club’s seven USHL banners, the 2021 Clark Cup Championship, the 2021 and 2020 Anderson Cup titles and the 2018-19 and 2020-21 Eastern Conference Championships. The former netminder played college hockey for Cornell University (ECAC) before embarking on a three-year professional career, including stops in the ECHL, CHL, Get Ligan (Norway), Division I (Sweden), and Magnus League (France). He played junior hockey for the Springfield Jr. Blues (NAHL) and Nanaimo Clippers (BCHL).

Needham’s responsibilities as Associate General Manager include overseeing the Chicago scouting department and staff, leading the club’s identification and drafting of elite talent.

“Noëlle Needham has a brilliant eye for talent and her expertise in skill development and character assessment have contributed significantly to our deep talent pipeline in Chicago,” said Robbins.  “These skills have been on display for some time as co-founder, coach and leader of the Sioux Falls Power, who has placed the most teams in Midget Nationals of any program in recent years, and are further reinforced by the performance of players she has identified for the Steel throughout the season and continuing through our development camp.  I know I speak for our entire coaching and hockey operations staff in expressing our excitement that Noëlle has agreed to continue to invest her time and talents with the Steel to produce elite hockey players and continue our relentless pursuit of championships.”

“I look forward to working directly with Noëlle in her new, expanded role as Associate General Manager,” said Garman. “She is incredibly sharp, has a great eye for the game, and has already proven that she can identify the type of player that will excel with the Steel.”

Needham was named assistant general manager prior to the start of the 2020-2021 season, helping build and maintain the club’s roster that claimed the 2021 Clark Cup and Anderson Cup. The Elkton, S.D., native has been an amateur scout for the Toronto Maple Leafs since the 2018-2019 season in addition to coaching the Sioux Falls Power 16U AAA team. Needham co-founded Legend Hockey in 2009 following her collegiate career as a forward with the University of Minnesota State-Mankato.

"I have the utmost respect for the Chicago Steel and would like to thank Larry Robbins for the opportunity to continue to represent it in an elevated capacity alongside Mike Garman and the entire coaching staff,” said Needham. “I look forward to continuing our work of providing a positive environment that players love to be in and building upon our strong culture of player development and winning."

The Steel will immediately begin a search for a new Assistant Coach, with the search led by Garman and Steel Head Coach Brock Sheahan.