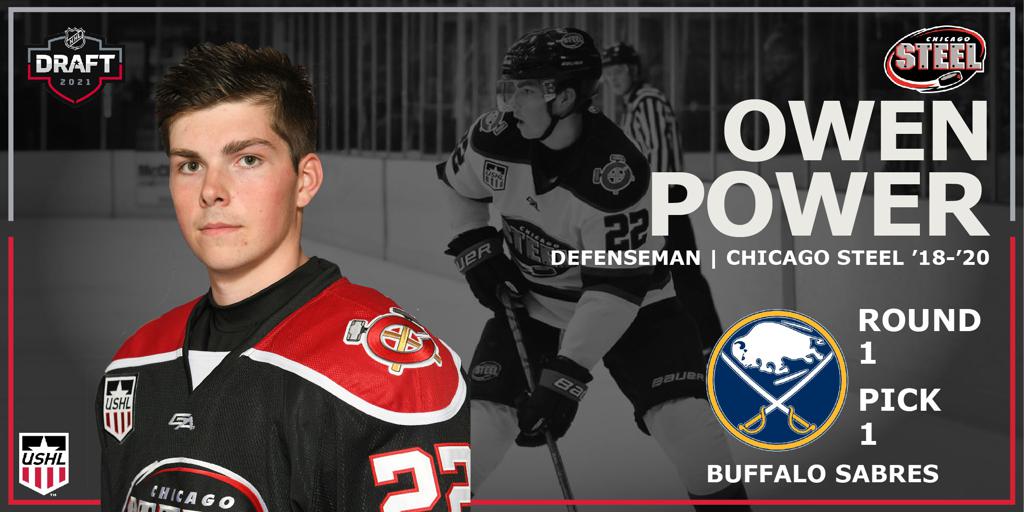 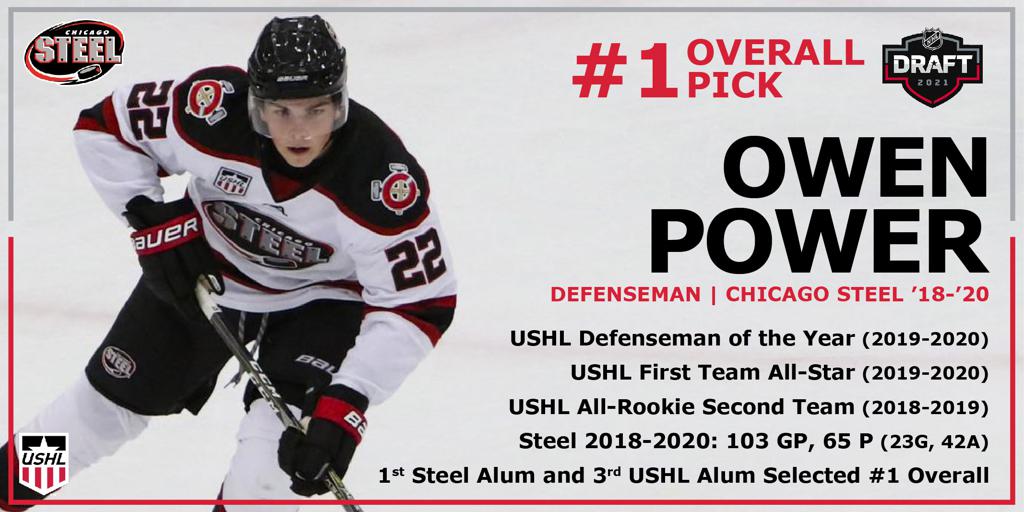 GENEVA, ILLINOIS — Former Chicago Steel blueliner Owen Power was selected by the Buffalo Sabres with the first overall pick in the 2021 NHL Draft Friday, becoming the first USHL alumnus from an independent team ever taken with the top selection.

Power joins Jack Hughes (2019 NHL Draft), and Auston Matthews (2016) as top picks to have played in the USHL (Hughes and Matthews each played for Team USA).

The Mississauga, Ontario native took the ice for the Steel at Fox Valley Ice Arena from 2018-2020.  He becomes the highest NHL Draft pick in Chicago’s 21-year history.

“We’re thrilled for Owen,” said Steel General Manager Mike Garman. “He is well-deserving of the first overall pick and is the exact type of player and person you can build a winning franchise around. His size, skill and ability are obvious, but what really separates him is his character and approach. He truly exemplifies what it means to be a Steel, and we’re forever grateful for his two seasons here. This is just the beginning for him, and we’re excited to watch his continued success.”

“Owen is elite in every way,” said Steel Head Coach Brock Sheahan. “He has amazing physical tools, high level hockey sense both offensively and defensively, and is internally driven to be the best player he can be.”

In his two seasons with the Steel, Power helped lead the team to a Clark Cup Final appearance in 2018-2019 and the first Anderson Cup in Steel franchise history as USHL regular-season champions in 2019-2020.

During his recently-completed freshman season at the University of Michigan, Power registered 16 points (3G, 13A) in 26 appearances on his way to nods on the B1G All-Rookie Team and B1G Second All-Star Team.

After the conclusion of the NCAA season, the blueliner was selected to represent his home country of Canada in the 2021 IIHF World Championship. Power recorded three helpers in 10 games in helping Canada capture the Gold Medal.

The Steel will send out additional recaps following each round of the draft on July 23 and 24.

Season Ticket Plans for the Clark Cup Champion Chicago Steel are on sale now by calling 855-51-STEEL or emailing info@ChicagoSteelHockeyTeam.com. Group tickets and experiences are also on sale for the 2021-2022 season.