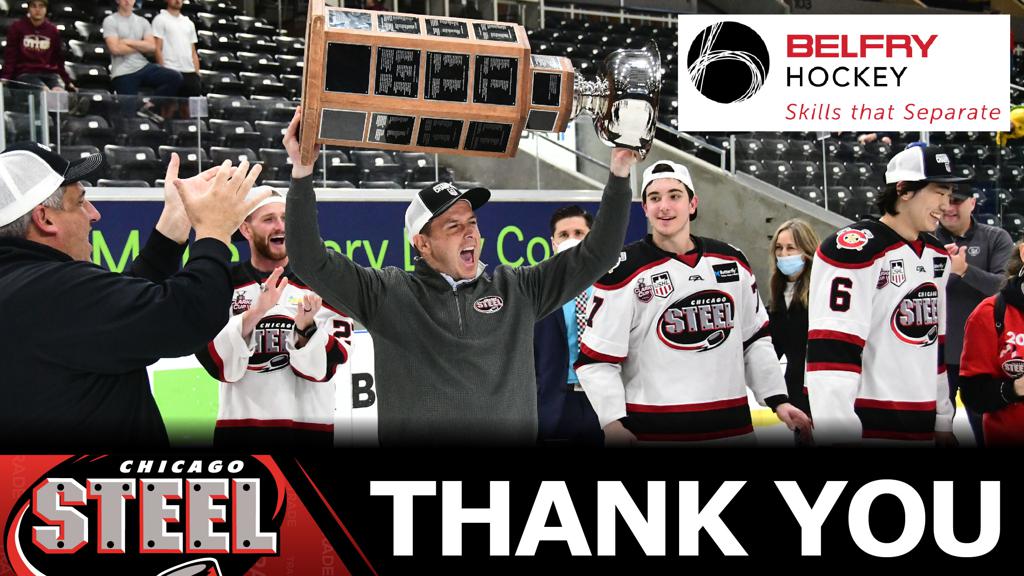 GENEVA, ILLINOIS — The 2021 Clark Cup Champion Chicago Steel announced today the conclusion of the club’s multi-year partnership with Belfry Hockey.  The Steel partnered with Darryl Belfry and his skills-based training organization since January 2018.

“After winning a Clark Cup under the leadership of Dan Muse in 2017 and his subsequent hiring by the NHL’s Nashville Predators, we embarked on a mission to build a foundational strategy surrounding style of play, individual skill-based development plans and overall player experience that would perpetuate throughout the high-class challenge of seeing our hockey leadership graduate to the professional ranks,” said Chicago Steel Owner Larry Robbins.

The evidence of this collaboration is clear.

Over the past three seasons, Chicago has won two Anderson Cup titles and appeared in the Clark Cup Final twice (the 2020 playoffs were canceled due to COVID), claiming the second Clark Cup in franchise history in 2021 while amassing the USHL’s best record in each of the past two seasons and leading the league in total goals scored. Over the past two seasons, Chicago has accounted for nine of the league’s top 11 scorers as well as the USHL points leader in the past three consecutive years.

Over the past three NHL drafts, the Steel have produced 22 NHL draft picks including eight in both 2020 and 2021, the highest total for any independent junior team in the world. The Steel have seen four First-Round picks in the NHL Draft over the past two years including the #1, #13 and #24 selections in the 2021 Draft.

“I’d like to thank Larry Robbins for the rare opportunity to achieve all aspects of an original vision we co-authored in 2018,” said Belfry.  “The idea of marrying player development with team performance in the USHL was pioneering and met with a lot of outside skepticism.  The original vision was to produce first round NHL Draft picks and win Clark Cup Championships as an interconnected culture, and it’s become that and so much more.  When Ryan Hardy came on board along with Greg Moore, the two of them accelerated the process and the optimism, excitement and compounding results that followed throughout the last few years has been nothing short of amazing.  Belfry Hockey would like to wish Larry Robbins and the Chicago Steel fans, management, coaching, operational staff, and players the best of luck going forward, and hope that the foundation built here provides the opportunity to exceed what we were able to start.  Despite the challenges and lost opportunities of COVID-19, we feel a great sense of pride for the way the program has been left and great anticipation for what lies ahead.”

Despite Covid-19 travel restrictions that prevented Darryl Belfry from coming to Chicago to train players, the foundations established by the Steel/Belfry partnership clearly demonstrated that the development approach is repeatable and perpetual.  All in-person skills training throughout 2020-2021 was conducted by Adam Nicholas as a member of the Steel/Belfry partnership as well as the Steel coaching staff led by Brock Sheahan.

“We thank Belfry Hockey for the insight and collaboration over the past three and a half years and we wish Darryl the best with the Leafs organization next season and beyond,” said Steel President Dan Lehv.  “We are committed to having the highest level of skill-based development and an innovative style of play supported by an elite and committed coaching staff that works as hard as the players do each day at Fox Valley Ice Arena.”