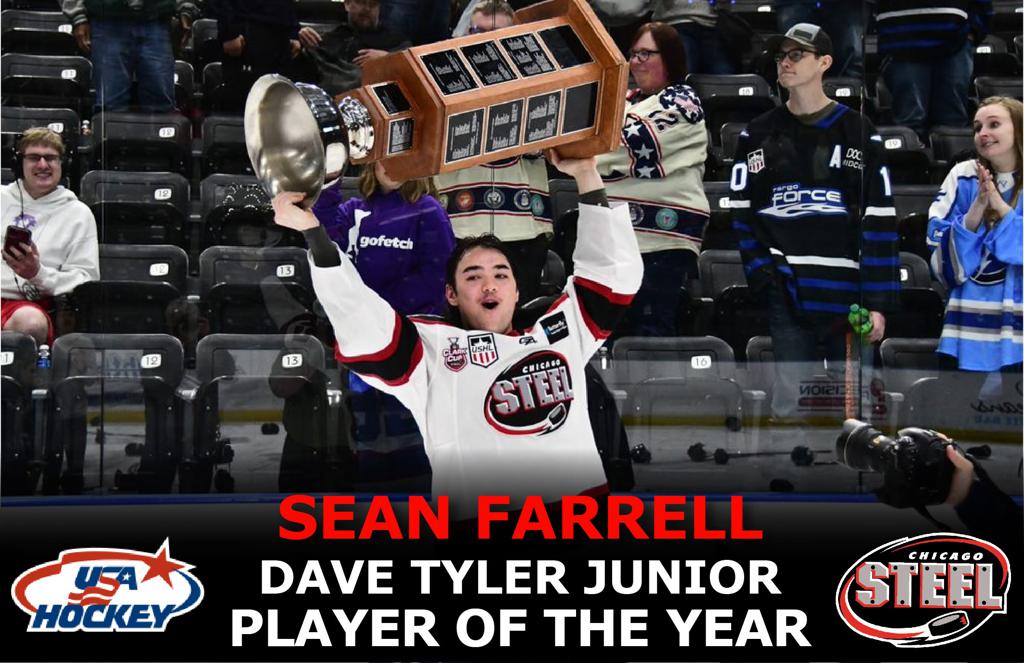 Farrell is the second Steel player to earn the national Player of the Year award, joining Andrew Miller who earned the distinction for the 2008-2009 season.

The honor is presented annually to the most outstanding American-born player in junior hockey and is named after Dave Tyler, who served on the USA Hockey Board of Directors for 32 years and played an instrumental role in the development and growth of junior hockey in the United States.

The Hopkinton, Mass., native was named the 2021 USHL Player of the Year following the conclusion of the Clark Cup Playoffs in addition to earning a spot on the All-USHL First Team.

The Harvard University-bound forward registered at least a point in 24 consecutive games from Nov. 25, 2020 through Feb. 11, 2020, the longest single-season point streak in USHL history with 15 goals and 25 assists over that stretch.

In the playoffs, Farrell helped the Steel win the 2021 Clark Cup title, accumulating 10 points (2G, 8A) in the eight-game championship run.

In addition to the USHL single-season point streak mark, Farrell, a native of Hopkinton, Mass., re-wrote the Steel record book during the 2020-2021 regular season.

The 5-foot-10, 177-pound skater now owns franchise marks for both points and assists in a career and a single season. Farrell tallied 101 points including 72 helpers during the 2020-2021 season for the single-year records, adding to his career totals of 157 points and 113 assists in a Steel uniform.

Farrell was named USHL Forward of the Week three times during the 2020-2021 campaign, the most of any forward in the league.