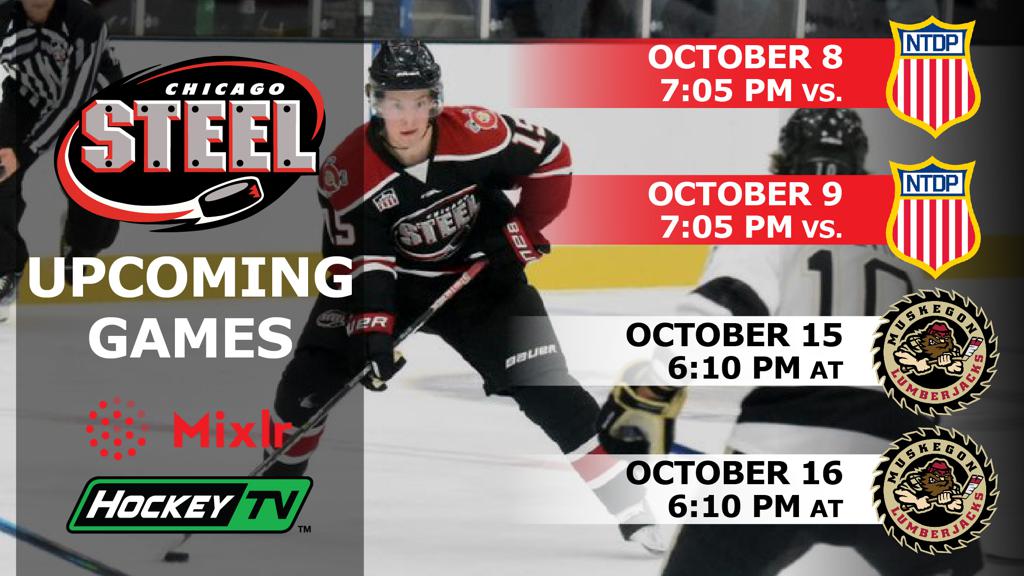 Steel fans can try to ‘Catch ‘Em All’ during Pokemon Night on Oct. 8 with appearances by several different Pokemon and chances for fans to get involved. Prizes will be dished out to winners of different Pokemon-themed contests during the game including trivia, “Who’s That Pokemon?” and a chance to catch Steel mascot Rusty on the ice during intermission.

A fan favorite, the Steel magnet schedule giveaway, returns on Saturday night as the first 500 fans through the gates of Fox Valley Ice Arena will receive a magnetic regular season schedule for the 2021-2022 regular season.

The Steel are coming off a heart-pounding home opener in which the team fought back from 2-0 and 3-2 third-period deficits to force overtime and beat the Muskegon Lumberjacks 4-3 in front of the biggest crowd at Fox Valley Ice Arena since March 7, 2020.

Steel netminder Nick Haas made 31 saves as Jayden Perron, Sam Lipkin and Jackson Blake netted goals in front of the Fox Valley faithful. Adam Fantilli sealed the game with a highlight-reel overtime goal, sliding the puck past Lumberjacks goaltender Jan Skoropik as he was hauled down to the ice.

Fantilli, a top prospect eligible for the 2023 NHL Draft, shares the USHL lead in points (6) with three goals and three helpers through four games played. The University of Michigan-bound forward has tallied at least a point in all four of Chicago’s contests thus far this season.

Joining Fantilli among the league leaders is Chicago forward Jack Harvey, a Stacy, Minn., native who has registered five points (2G, 3A) to claim a share of fourth in the early USHL points race.

Team USA U17, coming off a split weekend series against the Youngstown Phantoms, enters the Friday/Saturday set with a 1-2-1-0 record (3 pts).

Forward Gabriel Perreault netted two goals in his first USHL game action during the club’s 7-4 loss on Oct. 1 against the Phantoms at USA Hockey Arena in Michigan but was held off the scoresheet in an 8-1 Youngstown victory the following night at Covelli Centre in Ohio.

Team USA U17 is coached by former Chicago Head Coach Dan Muse who led the Steel to the 2017 Clark Cup Championship.

Perreault, a native of Hinsdale, Ill., is one of two Illinois-born players on the U17 roster. Defenseman Paul Fischer, a University of Notre Dame commit, joins the program from River Forest, Ill., after playing for the Chicago Mission since 2018.

After the homestand against Team USA, the Steel embark on a three-game road stretch from Oct. 15 through Oct. 22 before returning to home ice for a matchup on Saturday, Oct. 23 against the Dubuque Fighting Saints, when the Steel host “19 Promotions We Missed in 2020”.  The night marks the first Family Pack game of the season, a ticket deal with four tickets, four hot dogs, four chips, four sodas/waters and four chuck-a-pucks, starting at just $50.