STEEL HIT THE ROAD FOR MATCHUPS AGAINST MUSKEGON 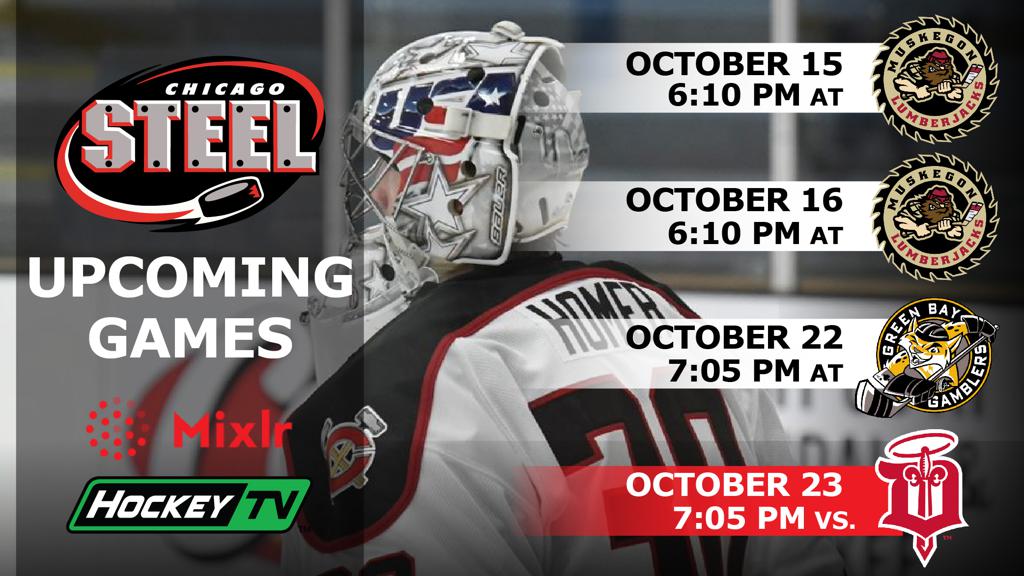 Chicago has earned 11 out of a possible 12 points to start the season, including a weekend sweep of Team USA U17 on October 8 and 9. The Steel took down Team USA 6-2 on Friday night, controlling the pace and jumping out to a 6-0 lead. In the weekend finale on Saturday, Chicago spotted Team USA a 3-0 lead into the second period before scoring five unanswered goals for a 5-3 come-from-behind victory.

Steel forward Jackson Blake, the USHL leader in points, recorded an eight-point weekend with two goals and six helpers over the homestand. The Carolina Hurricanes prospect is the first player in the league to reach the double-digit mark in points with 11 (4G, 7A) through six games played.

Adam Fantilli, a top prospect for the 2023 NHL Draft, has accounted for two game-winning goals this season, tied for the most in the USHL. His five markers rank second in the league through six games played.

The Chicago goaltending tandem of Gibson Homer and Nick Haas has combined for a 2.33 goals-against average, which currently slots Chicago at fifth best in the category.

This is the second of nine scheduled meetings between the Steel and Lumberjacks this season.

Muskegon enters the game still searching for its first win of the season. The Lumberjacks fell 4-3 to the Steel in overtime on Oct. 2 in front of a raucous crowd at Fox Valley Ice Arena in the first meeting of the season between the perennial Eastern Conference contenders. Joey Larson led the way for Muskegon with a multi-point performance (1G, 1A) in the loss while Jan Skorpik made 23 saves in net.

Defenseman Jacob Guevin has recorded four helpers this season to lead the Lumberjacks in points, one of which came in the Oct. 2 loss against the Steel. The Drummondville, Quebec, native is the highest-scoring returner in Muskegon’s lineup for the 2021-2022 season.

After a road contest against the Green Bay Gamblers at Resch Center in Wisconsin on Friday, October 22 at 7:05 pm CT, Chicago takes home ice on Saturday, October 23 versus the Dubuque Fighting Saints. The Saturday night showdown includes 19 Promotions We Missed in 2020 and is the first Family Pack Game of the Steel season, a special ticket deal that includes four tickets, four hot dogs, four chips, four sodas/waters and four chuck-a-pucks for just $50.

Friday, November 5 vs. Green Bay Gamblers (7:05 pm CT) Hockey is for Everyone