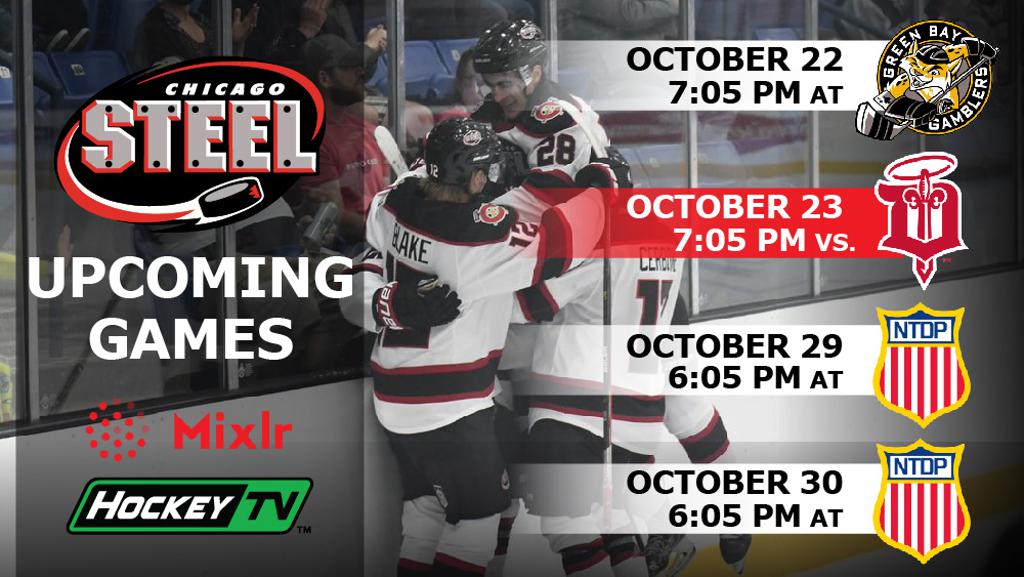 GENEVA, ILLINOIS — The Eastern Conference-leading Chicago Steel (6-0-2-0; 14 pts.) return to action this weekend with a road trip to Green Bay on Friday, Oct. 22 before the team takes the ice at Fox Valley Ice Arena on Saturday, Oct. 23 at 7:05 pm CT for “19 Promotions We Missed in 2020” against the Dubuque Fighting Saints.

Saturday’s duel against Dubuque is the first Family Pack Game of the season, a special ticket deal for Steel fans with 4 tickets, 4 hot dogs, 4 chips, 4 sodas/waters and 4 chuck-a-pucks for just $50.

What exactly is “19 Promotions We Missed in 2020”? It’s the most fan-friendly organization in the Chicagoland area making up for 19 regular season home games without fans during the 2020-2021 season by smashing 19 theme nights into a single Chicago Steel game!

Tiger King Night, Tik Tok Night, The Last Dance Night and more will be present and accounted for during a game that includes the most fan participation of any game on the Steel slate this season.

Lucky fans will be selected to participate in contests throughout the night like the ‘Pin the Tail on the Murder Hornet’ game and a ‘Supermarket Sweep’ style relay race in the hopes of tracking down toilet paper and Lysol wipes.

During intermission, the on-ice “Social Distancing Challenge” will feature contestants that need to stay at least a hockey stick apart to complete tasks.

Iconic musical hits from 2020 will be featured such as ‘I Saw a Tiger’ by Joe Exotic and a tribute to Taylor Swift releasing both ‘Folklore’ and ‘Evermore’ in the same year.

Steel fans will even get the chance to see themselves on the Steel video board with a ‘Zoom’ filter during the Geneva Family Dental ‘Smile Cam’, regardless of whether or not they figure out how to work the mute button.

Chicago has earned points in all eight games to begin the 2021-2022 campaign, just two games shy of tying the franchise record for longest point streak to begin a season set in 2016-2017 when the team went 10 games before suffering a regulation loss.

The Steel earned three out of a possible four points last weekend with a 6-5 overtime loss on Oct. 15 and a 4-1 win on Oct. 16 in a two-game set against the Muskegon Lumberjacks at Mercy Health Arena in Michigan.

The USHL points leader, Jackson Blake, added to his total with a four-point weekend (2G, 2A), extending his current streak to five straight games with an appearance on the score sheet (5G, 9A). The Carolina Hurricanes prospect has recorded 15 points (6G, 9A) over eight games this season.

Netminder Gibson Homer made a career-best 46 saves in net during the 6-5 overtime loss on Oct. 15. The Grand Rapids, Mich., native, is now 2-0-2-0 between the Steel pipes this year.

The Gamblers enter the matchup boasting the top goal scorer in the USHL, Vegas Golden Knights prospect Jackson Hallum. The University of Michigan commit registered a four-goal night on Oct. 8 against the Cedar Rapids RoughRiders, adding to his season total of seven markers through six games played.

Saturday’s opponent, the Dubuque Fighting Saints, face off against the Des Moines Buccaneers at home on Friday night before making the journey to Fox Valley Ice Arena on Saturday for the first time this season. Led by first-year head coach Greg Brown, the Fighting Saints’ offensive attack is headlined by forward Tristan Lamyre (5G, 4A). A season ago, Lemyre totaled a goal and two helpers in eight appearances against the Steel.

Dubuque has qualified for the Clark Cup Playoffs each of the last 10 years excluding the 2019-2020 postseason that was cancelled.  The Steel eliminated Dubuque in both the 2017 and 2021 postseasons en route to the franchise’s two Clark Cup Championships.

Friday, November 5 vs. Green Bay Gamblers (7:05 pm CT) Hockey is for Everyone