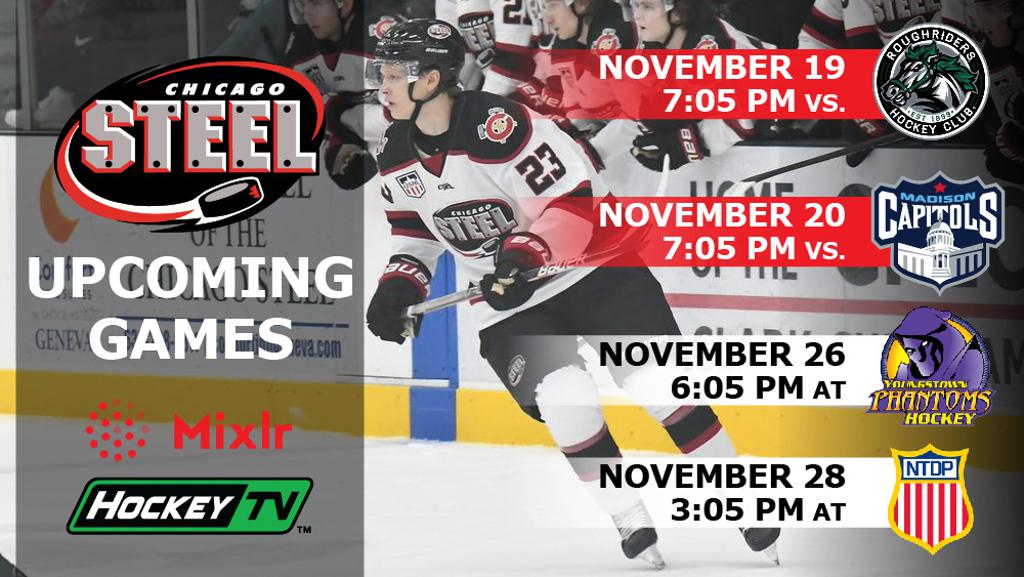 Friday’s matchup includes a special promotion for fans at Fox Valley Ice Arena to be revealed that evening, a timely idea that the Steel have been flushing out since the start of the season.

Did you know that five different Steel players think they’re the best NHL Video Game players on the team? The best may be settled on Video Game Night this Saturday. Minecraft fans will love our “Candelier” game with prizes for the winners and select spectators will get a chance to play real life Mario Kart during intermission on giant tricycles.

Chicago continued its point streak with a 6-3 road win over the Dubuque Fighting Saints on Friday, Nov. 12 and a 5-4 overtime loss at home against the Muskegon Lumberjacks.

Steel forward and top 2023 NHL Draft prospect, Adam Fantilli, was named the USHL Forward of the Week on Tuesday, his first time earning the league honor. The University of Michigan commit matched a career-high night with four points (3G, 1A) including his second career hat trick in Friday’s win before picking up two goals the following night. Fantilli leads the league with 12 goals in 17 games played.

The Cedar Rapids RoughRiders visit Fox Valley Ice Arena for the first time since January 26, 2020 after being unable participate in the 2020-2021 season due to damage to their home arena which took place during a derecho storm in August 2020.

The RoughRiders have won their last two games, a two-game sweep of the Green Bay Gamblers on home ice with a 2-0 shutout win on Friday, Nov. 12 followed up by a 5-3 victory the following night.

Cedar Rapids is led by Cole Burtch, an early-season acquisition from the Youngstown Phantoms, who has registered 13 points (8G, 5A) over nine games including two goals and a helper in last weekend’s sweep.

The Madison Capitols have been the surprise of the early season, earning points in 11 of their first 14 games to open the campaign. The Capitols have not made the playoffs in their five seasons of USHL play, but are led by new Head Coach/General Manager Tom Upton.

Capitols netminder Simon Latkoczy leads the USHL in wins among netminders with a 9-1-0-0 record while his 2.67 save percentage and .909 save percentage both rank in the top 10 of league goaltenders. A season ago, Latkoczy helped the Steel to their second Clark Cup title in franchise history, posting a 1.73 goals against average and a .938 save percentage in eight games during the postseason run. Latkoczy returned to Madison for the 2021-2022 season after the Capitols were unable to participate in the 2020-2021 season.

Tickets for both games start at just $10 and are available in person at the Steel Box Office at Fox Valley Ice Arena, by phone at 855-51-STEEL and online at chicagosteelhockeyteam.com.  The Steel now offer single-game ticket discounts for kids 12 and under and military.

After the two-game home set, the Steel take to the road for a game on Friday, November 25 at 6:05 pm CT against the Youngstown Phantoms and a Sunday afternoon matchup against Team USA (U18) on November 27 at 3:05 pm CT.