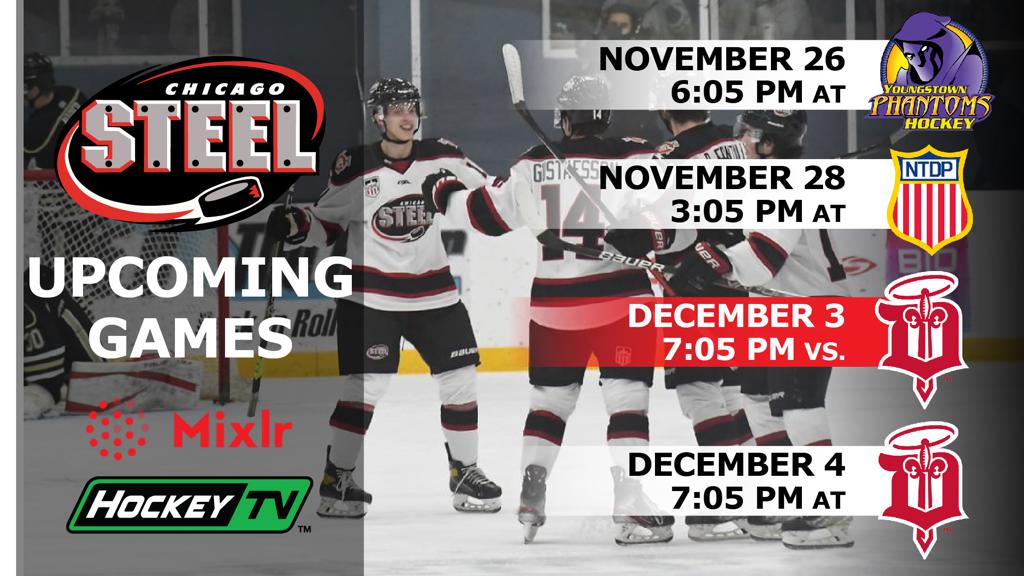 The Steel extended their current point streak to six games with a 3-2 victory over the Cedar Rapids RoughRiders on Friday, Nov. 19 and a 6-2 win against the Madison Capitols on Saturday, Nov. 20, with both games at Fox Valley Ice Arena.

Chicago forward and Arizona Coyotes prospect Sam Lipkin netted the game-winning goal with three minutes to play in Friday’s victory over the RoughRiders after rookie Nick Moldenhauer netted his first career USHL marker in the win, the sixth player on the Steel roster to net his first USHL tally this season.

Jackson Blake, a University of North Dakota commit selected in the 2021 NHL Draft by the Carolina Hurricanes, extended his career-best point streak to seven games (3G, 6A) with a helper on Friday and a multi-point game (1G, 1A) in the Saturday win over Madison.

Friday’s clash against Youngstown is the second of eight games between the clubs this season with the Phantoms earning a 5-1 victory on Oct. 31 in the teams’ first meeting of the year at Covelli Centre.

The Phantoms enter Saturday’s Eastern Conference battle winners in four of their last five outings including back-to-back wins last weekend with a 4-2 victory against Madison on Nov. 19 and a 7-2 rout of the Green Bay Gamblers on Nov. 20.

Phantoms rookie forward Adam Ingram has catapulted himself to a share of third in the USHL scoring race with 22 points (10G, 12A) over his first 17 games including a current 11-game point streak with seven markers and nine assists over that stretch.

The Steel split a pair of games against Team USA’s vaunted U18 class on Oct. 29 with a 3-1 victory but fell 5-1 against Team USA the following night with both games at USA Hockey Arena.  The U18 team featured five ‘A’-rated skaters according to NHL Central Scouting’s preliminary watch list.

Cole Spicer, a ‘C’-rated prospect, has registered three goals in two games against the Steel and has totaled four points (4G) in five USHL games thus far this season.

After the weekend contests, the Steel return home on Friday, December 3 for a fan-favorite promotion, Turtle Races, at Fox Valley Ice Arena with puck drop scheduled for 7:05 pm CT. During intermissions, turtles from Hickory Knolls Discovery Center in St. Charles will thrill the crowd with slow-moving action as returning champion Samsonite makes his triumphant return to a Chicago Steel game.

Tickets for the December 3 game start at just $10 and are available in person at the Steel Box Office at Fox Valley Ice Arena, by phone at 855-51-STEEL and online at chicagosteelhockeyteam.com.  The Steel now offer single-game ticket discounts for kids 12 and under and military.