STEEL TO BECOME CHICAGO ICE SHARKS FOR ONE NIGHT ONLY 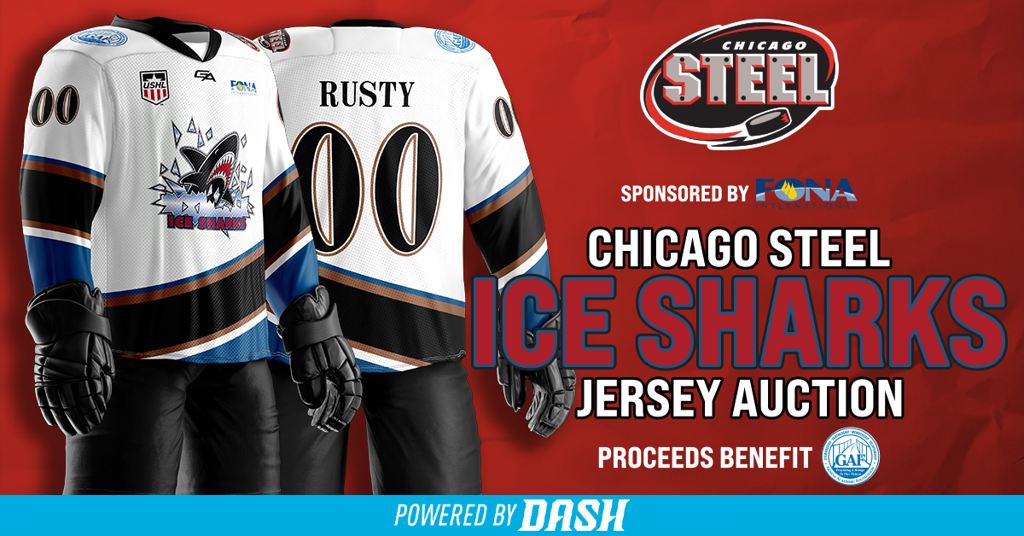 GENEVA, ILLINOIS — The Chicago Steel will honor what came before their 22-year history in Chicagoland on Friday, January 21 when they will wear specially designed ‘Chicago Ice Sharks’ jerseys against the Green Bay Gamblers at Fox Valley Ice Arena.

For the sixth consecutive season, the Chicago Steel have partnered with the Geneva Academic Foundation and FONA International for a special event designed to raise money for Geneva Community Unit School District 304.

“We are thrilled to be able to be Sharks for a night and be partnered with FONA and the Chicago Steel for the students of Geneva!” said GAF President Julie Post-Smith.

The week-long jersey auction is scheduled to begin on Thursday, Jan. 20 at 9:00 am CT and run through Thursday, Jan. 27 with bids closing at 6:00 pm CT. Fans can bid on game-worn jerseys for the entire Steel roster and Rusty’s jersey at: https://web.dashapp.io/auctions/chicagosteel.

Jerseys will be autographed by the player and can be shipped to or picked up by the winning bidders. The Friday night showdown will be broadcast on Hockey TV for fans to see the jerseys in action before the bidding concludes on January 27.

The sweaters are white with blue, black and brown stripes on both the elbows and waist. A black shark with large teeth breaking through ice is front and center on the jerseys with the ‘Ice Sharks’ wordmark just below in red and blue lettering. In addition to GAF logo on the left shoulder, the current Chicago Steel crest is placed on the right shoulder. The jerseys include a FONA International logo on the left chest.

For the sixth straight season, FONA International is sponsoring the event to ensure that all online auction proceeds will benefit the Geneva Academic Foundation. The flavor company, based in Geneva, actively promotes science education in the community through its “Discover FONA” program, teaching students about food and flavor science.

“FONA is so excited to sponsor this fundraising event for the sixth consecutive season,” said TJ Widuch, FONA Executive Vice President of Order Fulfillment. “We’re truly honored to support the Geneva Academic Foundation as well as our local community.”

Over the past five seasons, the Steel and FONA International have helped raise over $30,000 for GAF through a combination of auction proceeds and ticket sales.  Last season’s week-long online auction which began Feb. 11, 2021 and concluded Thursday, Feb. 18, 2021 raised over $10,000, the highest total in the history of the partnership between GAF, FONA and the Steel.

“It’s cool to think we once were a baby shark,” said Steel President Dan Lehv.  “It’s always fun to work with our partners at FONA International to help raise funds for the Geneva Academic Foundation, and this year’s event has an extra bite to it.”

Chicago suffered a 3-1 loss at home against the Youngstown Phantoms on Jan. 15, the team’s fourth loss at home during the 2021-2022 season.

Defenseman Lukas Gustafsson tallied the lone goal for Chicago in the loss, taking control of fourth on the USHL goals list among defensemen this season with seven markers.

With a helper on Saturday, Carolina Hurricanes prospect Jackson Blake became the first player in the league to reach the 50-point plateau with 18 goals and 32 assists over 32 games played this season. In each of the last three seasons, a Chicago Steel player has led the USHL in points.

The Green Bay Gamblers went 1-0-2-0 over a three-game weekend with a 6-3 win over Team USA on Jan. 15 at USA Hockey Arena and two overtime losses against the Muskegon Lumberjacks on Jan. 16 and 17 in Michigan, 4-3 and 2-1 respectively.

Green Bay has earned points in its last four consecutive games, last suffering a regulation loss against the Chicago Steel on Jan. 7, a 5-3 loss at Resch Center.

The Gamblers totaled three representatives at the 2022 BioSteel All-American Game on Jan. 17. Forwards Cam Lund, Nick VanTassell and defenseman Damien Carfagna were selected for the showcase of American-born 2022 NHL Draft-eligible talent at USA Hockey Arena. Carfagna ended the game with an overtime goal to seal a 4-3 victory for Team Blue, assisted by Steel forward Jack Harvey.

Following Friday’s game, the Steel hit the road next weekend for a pair of Eastern Conference clashes. Chicago travels to Wisconsin on Friday, Jan. 28 for a matchup against the Madison Capitols followed by a game against the Cedar Rapids RoughRiders on Saturday, Jan. 29 at ImOn Ice Arena in Iowa.

Tickets for the Chicago Ice Sharks game this Friday start at just $10 and are available in person at the Steel Box Office at Fox Valley Ice Arena, by phone at 855-51-STEEL and online at chicagosteelhockeyteam.com.  The Steel now offer single-game ticket discounts for kids 12 and under and military.