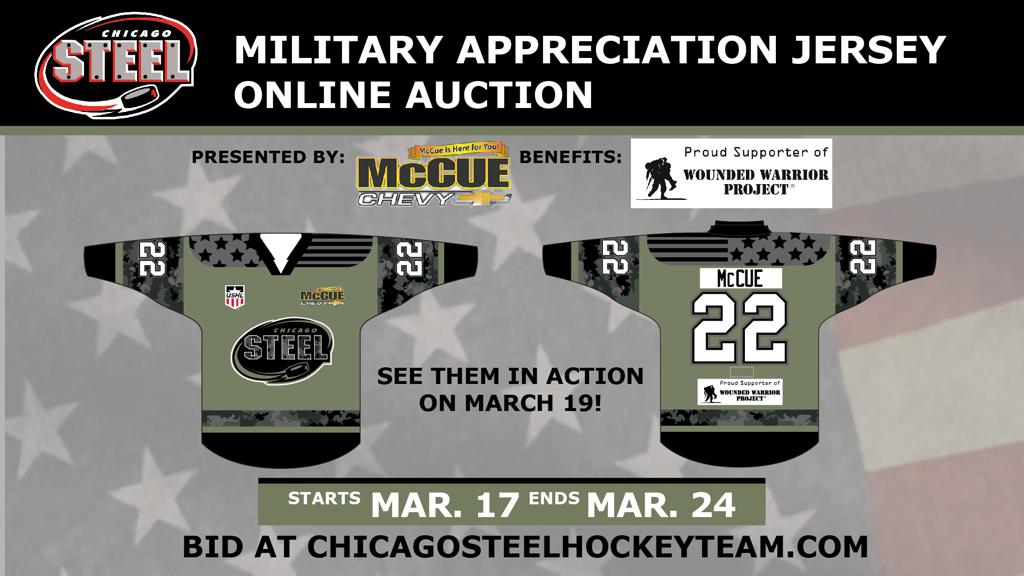 GENEVA, ILLINOIS — For the third consecutive season, the Chicago Steel have partnered with McCue Chevy to host a special Military Appreciation jersey auction with proceeds to benefit Wounded Warrior Project.

The week-long auction is scheduled to begin on Thursday, March 17 and runs through Thursday, March 24. Fans can bid on game-worn jerseys for the entire Steel roster and mascot Rusty at: https://web.dashapp.io/team/chicagosteel.

Chicago will wear the specially designed jerseys on Saturday, March 19 on home ice for Military Appreciation Night presented by McCue Chevy against the Youngstown Phantoms. Jerseys will be autographed by the player and shipped to winning bidders.

The Steel are offering complimentary tickets for active military and veterans and their families with up to six tickets included.

The eye-catching green jerseys will give the team a completely different style than the red, black and white sweaters to which Steel fans have grown accustomed. The left half of the shoulder pads carry distinct stripes of gray and black met halfway by a section of black stars on a gray background to finish the right side of the shoulder pads. With white numbers on the sleeves outlined in black and gray, a green, black and gray, a camouflage pattern matches the stripe going around the waist of the jersey. Front and center of the jerseys is a never-before seen Steel crest in black and white with military green making up the usual metal-plated letters of ‘STEEL’. The USHL patch appears on the right lapel along with the McCue Chevy logo as the presenting sponsor on the left lapel. On the back of the jerseys below the nameplate and number is the Wounded Warrior Project logo.

McCue Chevy, a Steel partner since 2015, approached the Steel prior to the 2019-2020 season with the idea of organizing a special event to benefit Wounded Warrior Project.  Over the last two seasons, Steel fans have raised over $21,000 in gross proceeds through online auctions.

“Coming on the heels of the success of this event the last two seasons, McCue Chevy is once again proud to support Military Appreciation Night,” said Tim McCue, Owner of McCue Chevy.  “We appreciate our partnership with the Chicago Steel to raise awareness and funding in support of our heroes through Wounded Warrior Project.”

Before the game, the Chicago Blackhawks Warriors will take the ice and play against the Central Illinois Warriors in a charity game at Fox Valley Ice Arena at 3:30 pm. The Chicago Blackhawks Warriors and Central Illinois Veteran Warriors give veterans who have been injured or disabled in the course of their service the opportunity to play hockey in an environment suited to their needs. Each program uses hockey as a rehabilitation tool to overcome physical and mental disabilities sustained in their service to the nation. Both clubs will join the Steel in holding a giant American flag during the national anthem performance prior to puck drop between the Steel and Phantoms on March 19.

During the game, Chicago will recognize several veterans and active military members including veteran Sal Gonzalez, a former machine gunner in the Marines Corps. Originally from East Los Angeles, Gonzalez’ truck was hit by an IED in 2004 in Iraq, causing a traumatic brain injury and post-traumatic stress disorder, ultimately causing him to lose his left leg below the knee. Gonzalez is active with Wounded Warrior Project and has appeared on ‘America’s Got Talent’ and ‘Nashville’ in his musical career.

“We are proud of our continued affiliation with Wounded Warrior Project through our great partners at McCue Chevy,” said Steel President Dan Lehv.  “As we honor those that serve, we encourage all of our fans to consider participating in the auction to raise funds for such an impactful cause.”

The Steel (29-11-7-1; 66 pts.) currently sit in second place in the Eastern Conference, a point behind the Dubuque Fighting Saints with a game in hand. Chicago earned victories in back-to-back home games with a pair of 5-2 victories, first against the Cedar Rapids on March 11 before a win over the Madison Capitols on March 12 in the club’s most recent game action.

Chicago rookie forward Nick Moldenhauer picked up two goals in the victory against Cedar Rapids and added a marker and an assist in the win over Madison. The Mississauga, Ontario, native has compiled eight points (5G, 3A) over his last five games.

Youngstown is led by rookie forward Adam Ingram, ranked #14 among North American skaters eligible for the 2022 NHL Draft. The 6-foot-2, 174-pound skater has totaled 49 points (21G, 28A) over 45 games played in his first USHL campaign.