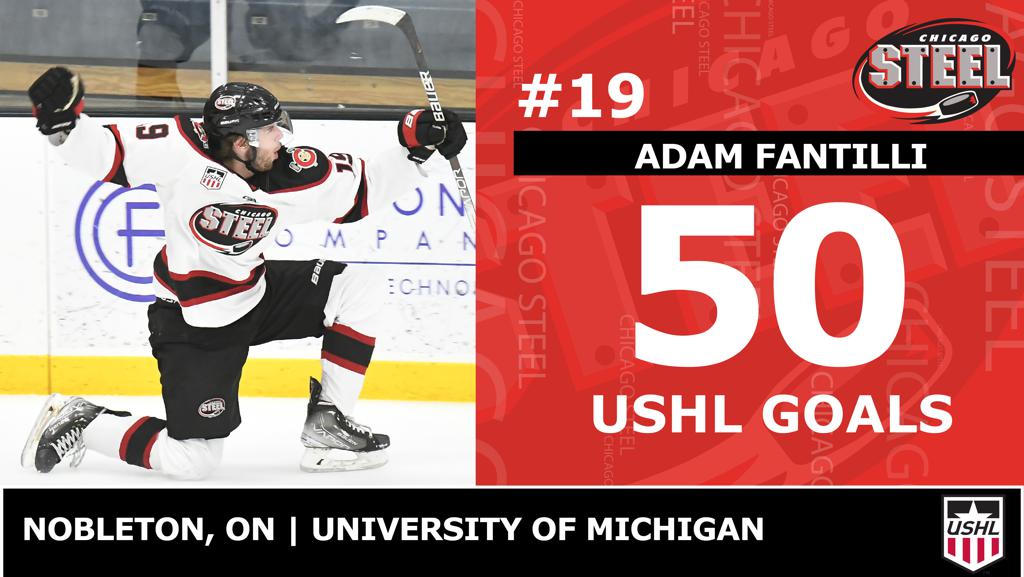 Madison jumped out to a 2-0 lead before goals from Dylan Robbins and Fantilli brought the game back even while Steel netminder Christian Manz turned away 39 shots from the Capitols, his highest single-game total of the season.

Adam Fantilli’s game-winner, his 32nd goal of the season, came with just over four minutes to play, giving Chicago its sixth win in the last seven games.

In a rocky start for Chicago on the road, the Capitols controlled the majority of the scoring chances in the opening frame.

On an offensive zone faceoff for Madison just over a minute into the action, Jack Musa controlled the puck on the end line before sending a pass to Nick DeSantis. A quick pass from DeSantis found Naperville, Ill., native Jack Horbach in the middle of the slot who poked a puck past Manz.

Capitols goaltender Simon Latkoczy was tested on two power plays from Chicago in the first period.  The Steel entered the night ranked as the top man advantage unit in the USHL but Latkoczy and the Capitols defense successfully limited the Steel chances, escaping the opening frame holding onto a 1-0 cushion.

For the second consecutive period, Madison kicked off the frame with a marker. Less than a minute into the second, Reid Pabich teamed up with Nick Wallace on an odd-man rush, doubling the lead to 2-0 for the home team.

Already with a two-goal advantage, Madison earned a chance to take a decisive lead as they were sent on an extended 5-on-3 opportunity.

In what proved to be a crucial turning point in the game, Manz made three important stops to keep the Capitols off the board during the 5-on-3 before Jack Harvey cleared the zone to cancel the first infraction. With 30 seconds of shorthanded time remaining, Madison couldn’t put a shot on net as the Steel escaped unscathed.

Chicago reached the back of the net for the first time with a redirection from Dylan Robbins. After defenseman Lukas Gustafsson breezed through the slot and had a shot turned away by Latkoczy, Gustafsson regained the puck and fired a pass from the right point. Parked in front of the crease, Robbins was able to get his stick blade on the puck to cut the deficit in half late into the middle frame.

Heading into the third period and having been outshot 22-15 to that point, it was Fantilli and Manz who teamed up to put the Steel on top.

Fantilli struck early on in the third period, capitalizing on a power play for the first time on the night. Working around the top of the Steel offensive zone, Joe Miller tossed a puck to Jackson Blake on the right point. Blake fed Fantilli who took the middle of the ice, ripping a wrist shot past Latkoczy to tie the game.

Manz, a Blaine, Minn., native, posted his nomination for USHL save of the year later in the period. Jack Musa brought a puck to the front of the net as Manz dove to his left and out of his crease to make a save. With his momentum carrying him behind the net, Musa tried to beat Manz to the right post with a wrap-around attempt but Manz was quicker as he fully extended with his goalie stick in his right hand, shutting the door from out of nowhere.

After Manz kept the score tied, Fantilli played hero with his USHL-leading 32nd marker of the year. On an offensive zone rush during 4-on-4 play, Miller dropped a puck to Cal Thomas.  Thomas rushed the net and at the last moment flipped a backhand pass to Fantilli, joining the scoring chance on Thomas’ left side. Fantilli’s wrister beat Latkoczy once more to put Chicago on top 3-2 with 4:05 left in regulation, the first Steel lead of the game.

The Capitols could not muster a tying goal in the closing minutes as Chicago escaped with the victory.

The Steel continue the weekend at home with matchups against the Youngstown Phantoms on Saturday, March 19 at 7:05 pm and Sunday, March 20 at 3:05 pm CT at Fox Valley Ice Arena.