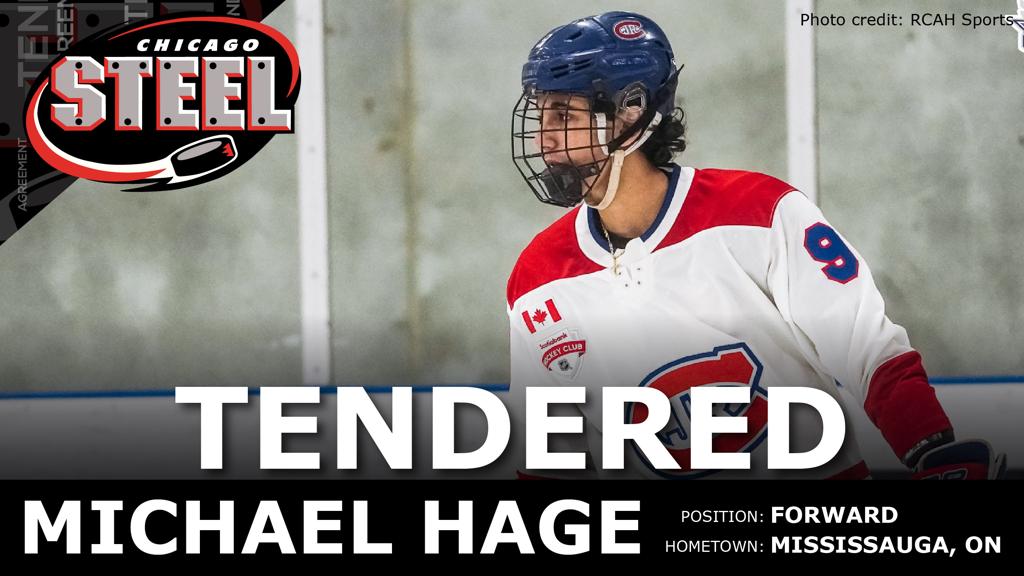 GENEVA, ILLINOIS — The Chicago Steel announced Tuesday the signing of forward Michael Hage of the Toronto Jr. Canadiens to a USHL tender agreement for the 2022-2023 season.

“We’re thrilled to have Michael Hage play for the Steel next year,” said Steel General Manager Mike Garman. “He’s a very talented, dynamic forward who fits our style of play perfectly. We want to thank the Hage family for giving us the opportunity to further Michael’s development both as a player and a person. Michael is passionate about becoming the best player he can be and we’re grateful our values on player development and team success align seamlessly.”

The Mississauga, Ontario, native appeared in one game of OJHL play for the Jr. Canadiens this season, totaling a four-point (2G, 2A) outing as a 15-year-old.

“I am very excited to sign with the Chicago Steel,” said Hage. “I look forward to playing and growing within such an amazing organization that has an unparalleled track record of developing players. I can’t wait to get started and work hard to take my game to the next level and contribute to the success of the team. I am very thankful for this amazing opportunity.”

Now in its 11th year, the USHL tender process allows teams to sign up to two 2006 birth year players prior to the 2022 USHL Phase I Draft, which is scheduled to take place in May.

Hage is the second player signed to a tender agreement by the Steel for the 2022-2023 season, joining forward Macklin Celebrini.  His signing will take the place of Chicago’s second-round pick in the 2022 USHL Phase I Draft scheduled for next Monday, May 2. Tendered players are required to play in 55 percent of a team’s games during the regular season, notwithstanding injury, illness or suspension.

Hage is the seventh player to be tendered in Chicago Steel franchise history, joining forward Robert Mastrosimone in 2017, defenseman Ryan Ufko in 2019, defenseman Jake Livanavage and forward Adam Fantilli in 2020 and forward Jayden Perron in 2021.

The Steel are the top seed in the Eastern Conference for the 2022 Clark Cup Playoffs, awaiting the winner of the best-of-three series between the #4 Youngstown Phantoms and #5 Madison Capitols, with Madison currently holding a 1-0 series lead.

Game 1 of the Eastern Conference Semifinals is scheduled for Saturday, April 30 as the Steel take to the road before returning home for Game 2 at Fox Valley Ice Arena on Monday, May 2 at 7:05 pm CT and, if necessary, Game 3 on Tuesday, May 3 at 7:05 pm CT.

Eastern Conference Semifinals tickets are on sale now starting at just $10 and are available in person at the Steel Box Office at Fox Valley Ice Arena, by phone at 855-51-STEEL and online at chicagosteelhockeyteam.com.  The Steel offer single-game ticket discounts for kids 12 and under and military.