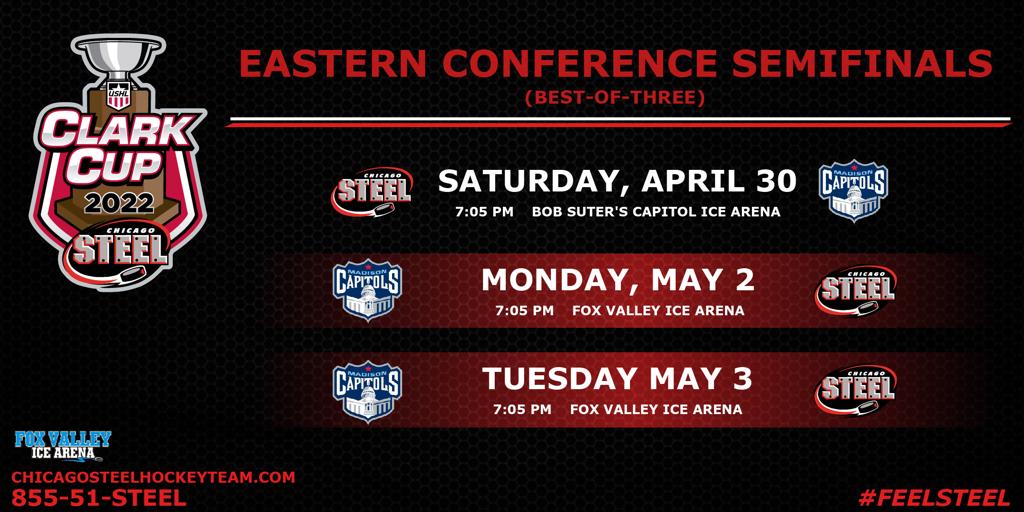 GENEVA, ILLINOIS — The #1 seed Chicago Steel will clash against the #5 seed Madison Capitols in the Eastern Conference Semifinals starting Saturday, April 30 in Madison.  This is the first time the two teams have met in the postseason.

Madison prevailed in its best-of-three First Round series against the Youngstown Phantoms, earning a 2-0 series victory with a 3-2 win on Monday and a 5-3 victory on Tuesday at Covelli Centre in Ohio.  The Steel earned a First Round bye, finishing atop the Eastern Conference regular season standings.

Game 1 of the matchup between Chicago and Madison takes place on Saturday, April 30 at Bob Suter’s Capitol Ice Arena in Wisconsin before the best-of-three series shifts to Fox Valley Ice Arena in Geneva for Game 2 on Monday, May 2 at 7:05 pm CT and Game 3, if necessary, on Tuesday, May 3 at 7:05 pm CT.

In 10 regular season matchups between the Eastern Conference foes, the Steel held a 6-2-2-0 record with a 4-1-0-0 edge on home ice and a 2-1-2-0 mark as the visitors. The Steel scored an average of 4.40 goals per games against the Capitols while surrendering 3.00 goals-against per game.

Madison finished the regular season with a 30-29-3-0 (63 pts.) record, qualifying for the Clark Cup Playoffs for the first time in franchise history under first-year Head Coach and General Manager Tom Upton.

Madison netminder Simon Latkoczy logged the second-most minutes of any goaltender during the regular season (2,429 mins.), earning 23 victories between the Capitols pipes with a 3.31 goals-against average and an .887 save percentage. The Trencin, Slovakia, native helped lead the Steel to the 2021 Clark Cup title after being selected by Chicago in the 2020-2021 dispersal draft with Cedar Rapids and Madison not participating in the 2020-2021 USHL season.

On the points list for the Capitols, two of the team’s top three point-getters in the regular season were defensemen.

University of Minnesota commit Luke Mittelstadt was the only blueliner to lead his team in scoring during the 2021-2022 campaign, racking up 55 points (19G, 36A) across 60 games including six points (1G, 5A) in the season series against the Steel.

Madison forward and Anaheim Ducks prospect (2021, Round 6 #162 Overall) Kyle Kukkonen ranked second on the club with 53 points (22G, 31A) and registered 10 points (4G, 6A) against the Steel this year, tied for the most of any Madison skater.

In his first season in the USHL, defenseman Ben Dexheimer rounded out the top three in points for Madison with 47 (8G, 39A) over 60 games. In matchups against Chicago, the University of Miami (Ohio) commit totaled five helpers.

During the 2021-2022 campaign, the Steel were paced by Jackson Blake, a Carolina Hurricanes prospect (2021, Round 4 #109 Overall) with 77 points (27G, 50A), the fifth-most in a single season in Chicago Steel franchise history. The Eden Prairie, Minn., native picked up seven points (3G, 4A) in contests against the Capitols this year.

Leading the Steel in games versus Madison this season was forward Joe Miller with 12 points (3G, 9A). In the final matchup of the regular season between Chicago and Madison, Miller accounted for three points in the final 3:03 of regulation time, assisting on a goal and scoring twice in a span of 14 seconds, forcing overtime from the 5-2 deficit at the start of the scoring binge.

Steel forwards Adam Fantilli and Nick Moldenhauer are currently competing for Team Canada at the IIHF U18 World Championships in Germany and will return to the Steel following Canada’s participation in the tournament.

Eastern Conference Semifinals tickets are on sale now starting at just $10 and are available in person at the Steel Box Office at Fox Valley Ice Arena, by phone at 855-51-STEEL and online at chicagosteelhockeyteam.com.  The Steel offer single-game ticket discounts for kids 12 and under and military.