MIDDLETON, WISCONSIN — Fresh off a 2-0 series sweep over the Youngstown Phantoms in the First Round of the 2022 Clark Cup Playoffs, the Madison Capitols earned a 4-2 victory over the Chicago Steel in Game 1 of the best-of-three Eastern Conference Semifinals Saturday night at Bob Suter’s Capitol Ice Arena.

Madison never trailed as it jumped out to a 2-0 edge over the defending Clark Cup Champions, holding on for a 4-2 victory led by netminder Simon Latkoczy in a 30-save performance. The Capitols offense spread the wealth with four different goal scorers and 10 total skaters reaching the scoresheet.

The first power play of the night belonged to Madison as the Capitols strung together multiple chances that were stopped by Steel goaltender Christian Manz early in the first period.

After the Steel successfully canceled the minor infraction, Adam Fantilli was sprung on a breakaway bearing down on Latkoczy but Fantilli’s shot was gloved away by the Capitols netminder.

Just two minutes after the big save from Latkoczy, an Illinois native put the Capitols in front. After taking a pass from Brandon Chabrier in the neutral zone, Jack Horbach was the trigger man on a 2-on-1 as he took his shot and put it past Manz for his second goal of the postseason.

Late in the first, another odd-man-rush for Madison resulted in an open lane for the Capitols regular season points leader, Luke Mittelstadt. Making his 11th stop of the period, Manz soaked up the wrister to keep the score 1-0 in favor of Madison.

A chance for Chicago fluttered off the post in the opening minutes of the second period. After Andon Cerbone won an offensive zone faceoff, Nick Moldenhauer fed Lukas Gustafsson with a shot from the right point that ricocheted off the pipe to Jack Harvey who could not calm down the bouncing rebound.

Jack Musa doubled the lead for the home team as his effort to catch up to the play was rewarded. An initial chance from Nick DeSantis was denied by Manz on the right post before DeSantis found a charging Musa who re-directed it home to increase the lead to 2-0.

The Steel broke through thanks to impeccable stickhandling from Gustafsson late in the middle frame. The blueliner dangled through a pair of Capitols defensemen and flipped a puck past Latkoczy, his first career playoff goal.

Chicago’s momentum lasted until late in the second when the Steel were whistled for a penalty, sending Madison to its third power play of the game. A minute into the man advantage, Casey Severo had free space in front of the net as he got his stick on a pass from Luke Mittelstadt to beat Manz and increase the lead to 3-1 before the intermission.

The best shift of the night for the Steel came with seven minutes remaining in the third period as possession was held by Jackson Blake, Adam Fantilli and Joe Miller before a point shot from Gustafsson was directed out of play by Latkoczy.

Entering desperation mode as time wound down, Chicago’s net was emptied for an extra attacker and the Steel offense took advantage. Winding and firing a shot with just over a minute left was Jackson Blake from the top of the left circle in the offensive zone. The puck wired past Latkoczy to cut the deficit to 3-2 for the time being.

Off the ensuing faceoff, the Steel advanced the puck behind the Capitols crease but a pass to the point could not be held in as Jake Dunlap raced down the left side to win the loose puck and seal the Game 1 win for Madison with an empty net goal.

With the Steel facing elimination for the first time since the 2019 Clark Cup Final, the Eastern Conference Semifinals shifts to Fox Valley Ice Arena for Game 2 on Monday, May 2 at 7:05 pm CT and, if necessary, Game 3 on Tuesday, May 3 at 7:05 pm CT. 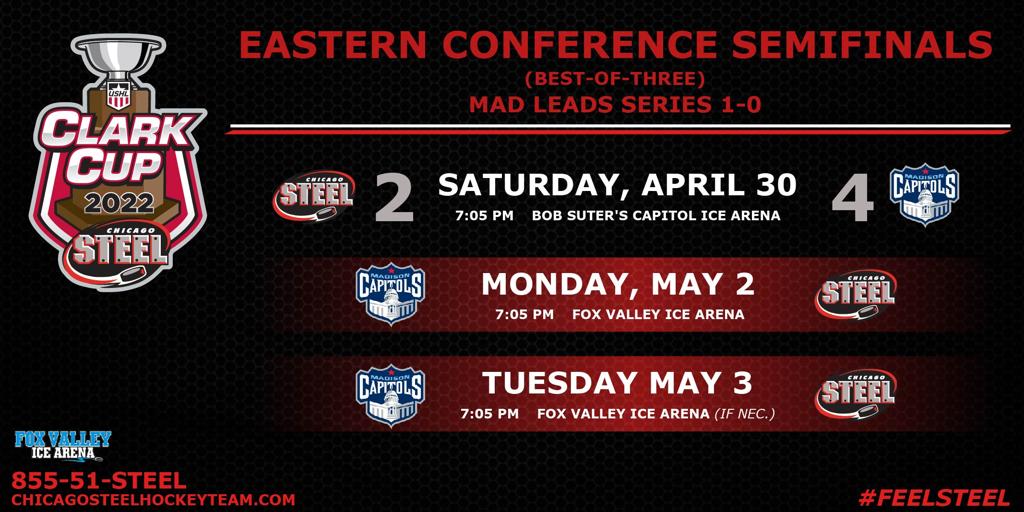