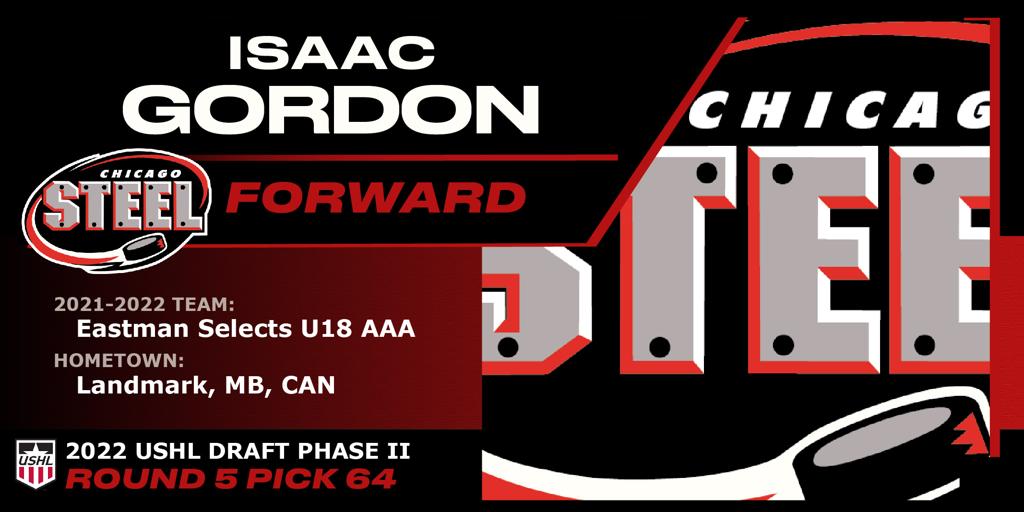 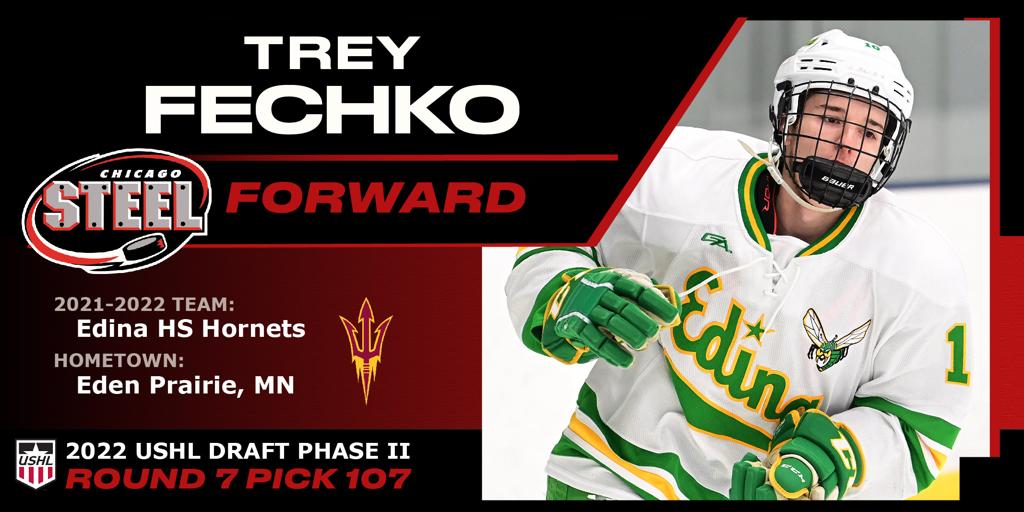 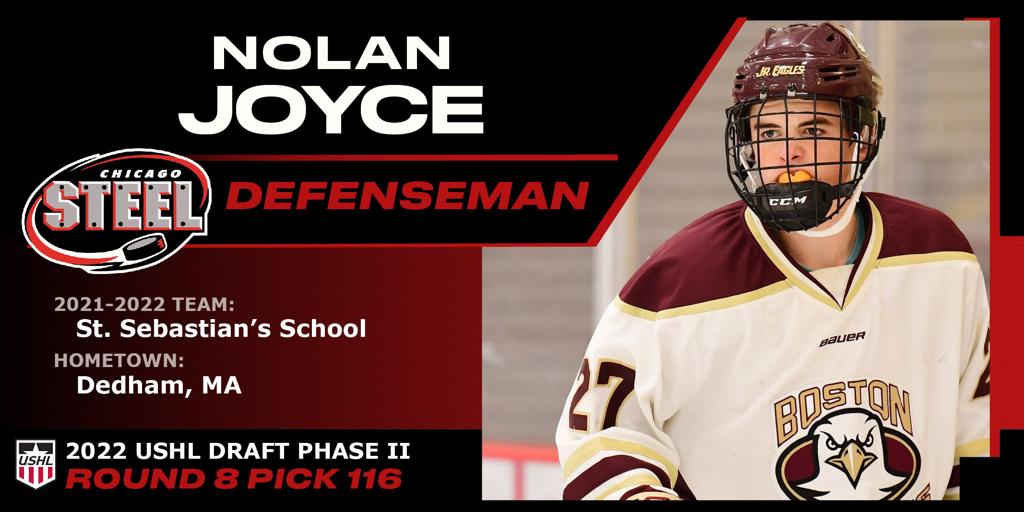 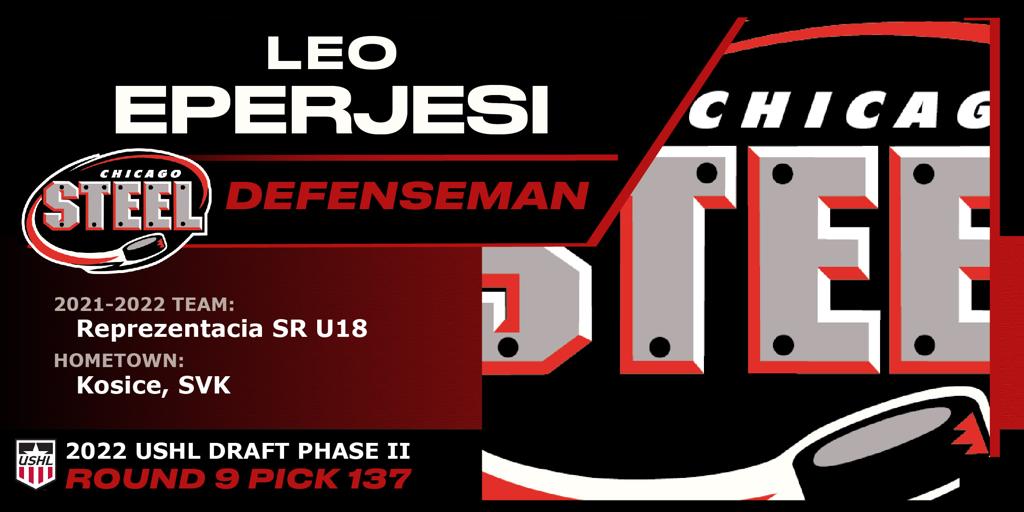 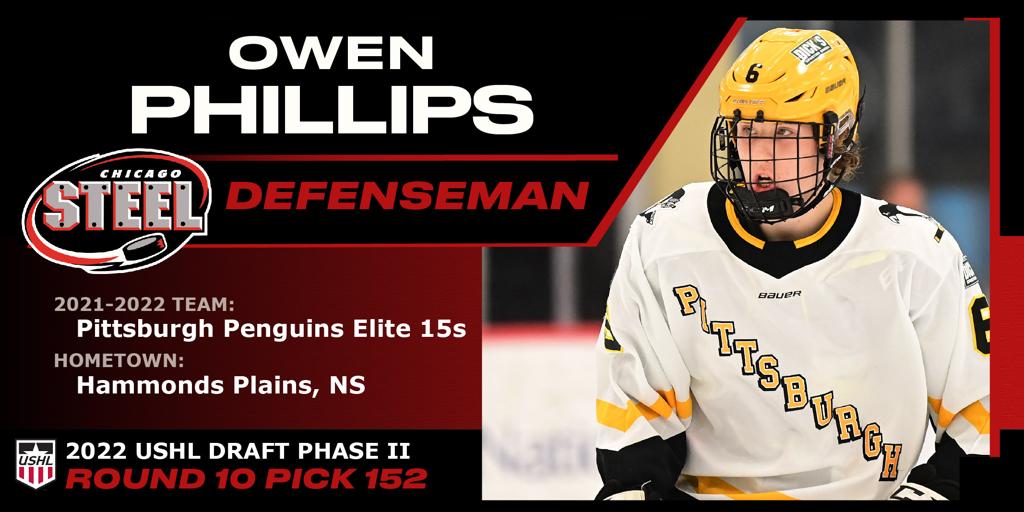 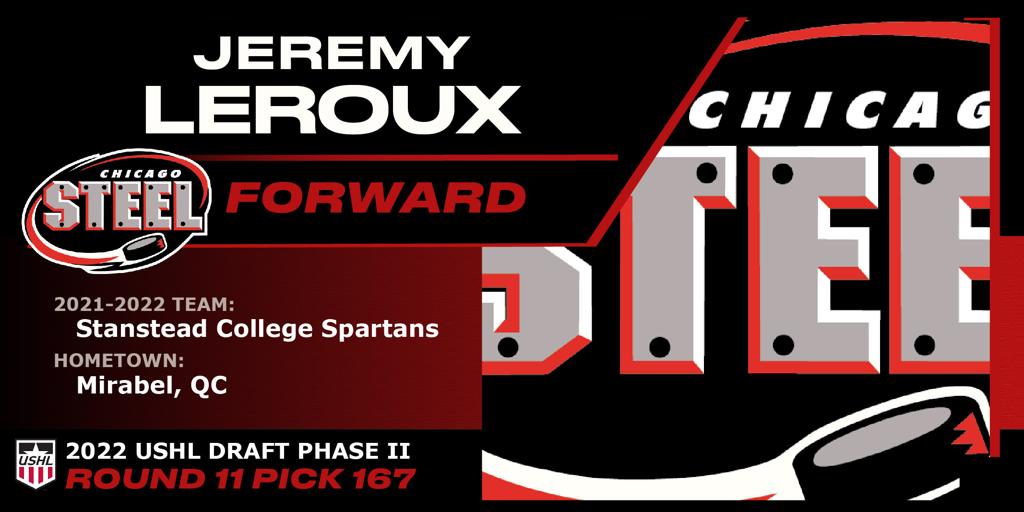 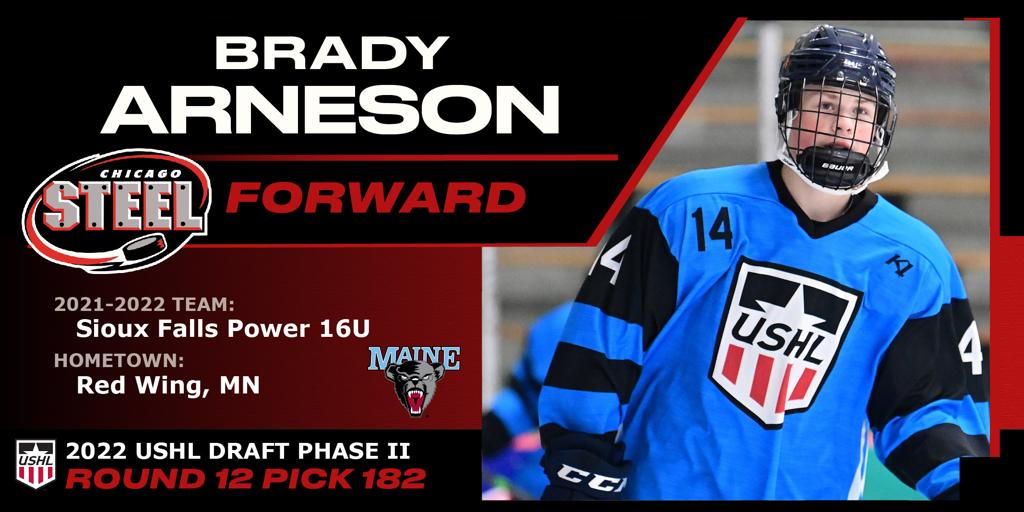 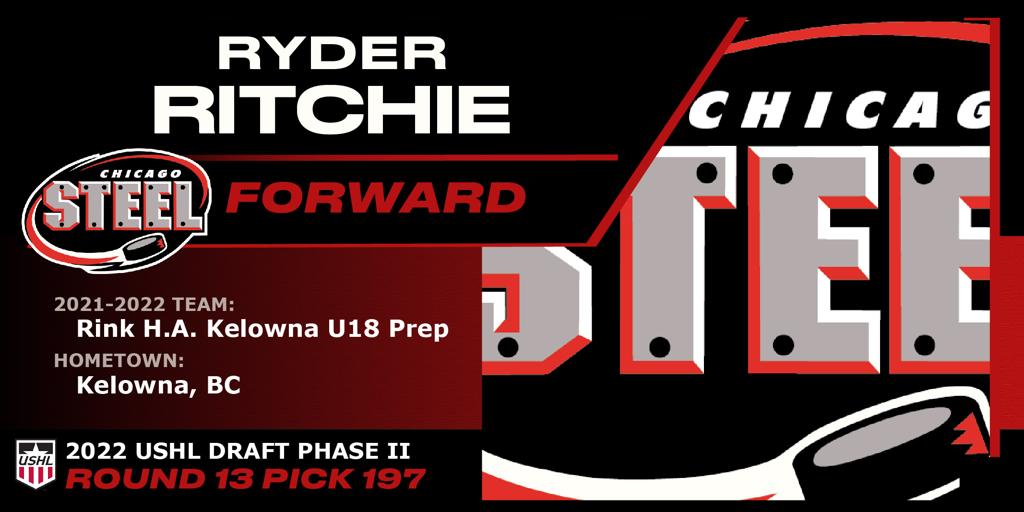 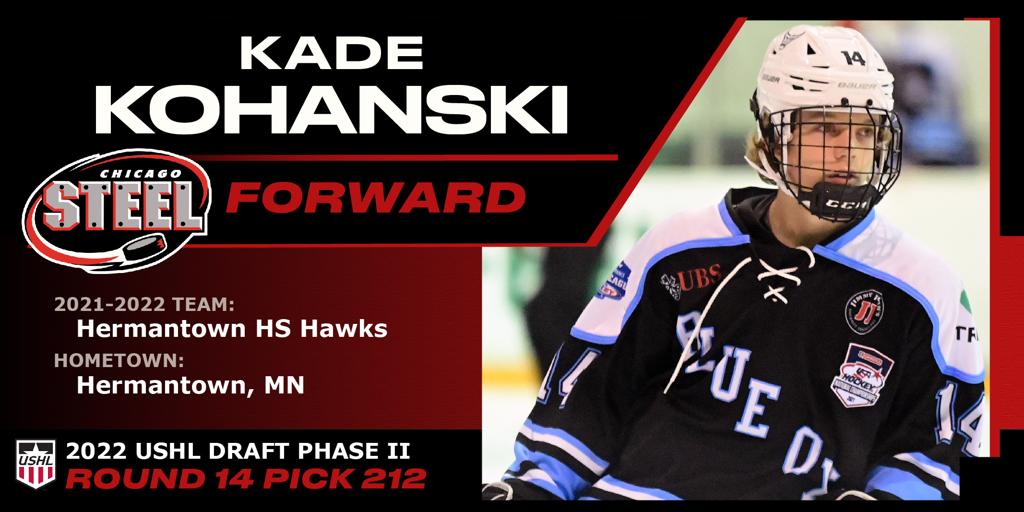 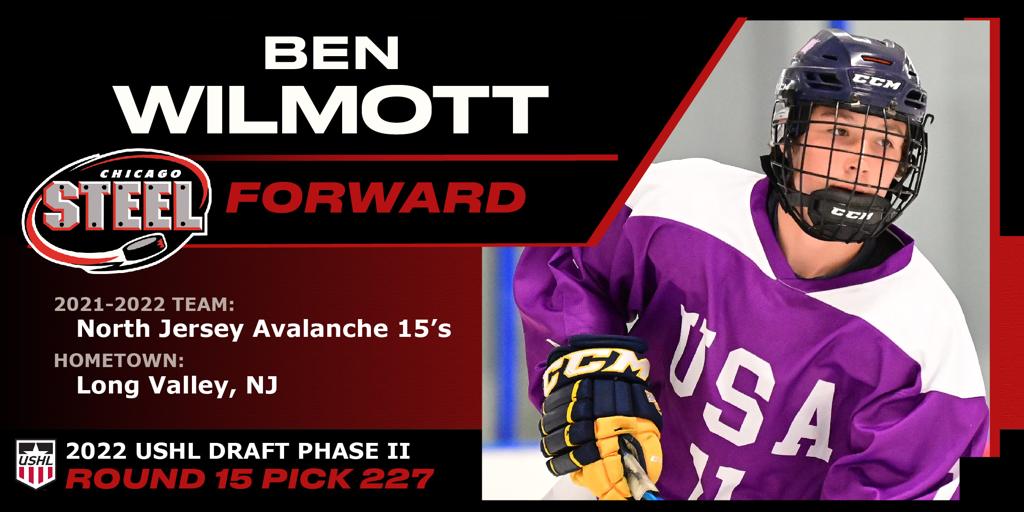 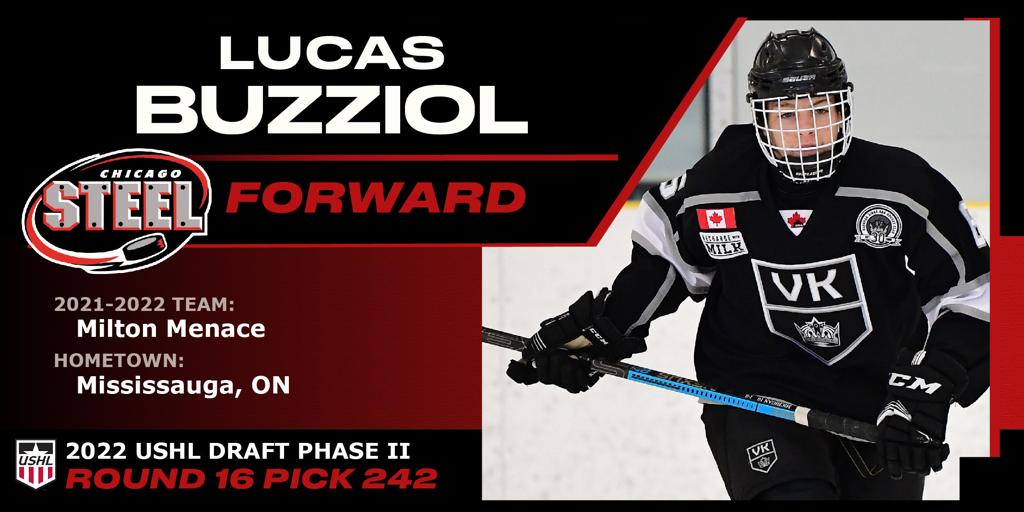 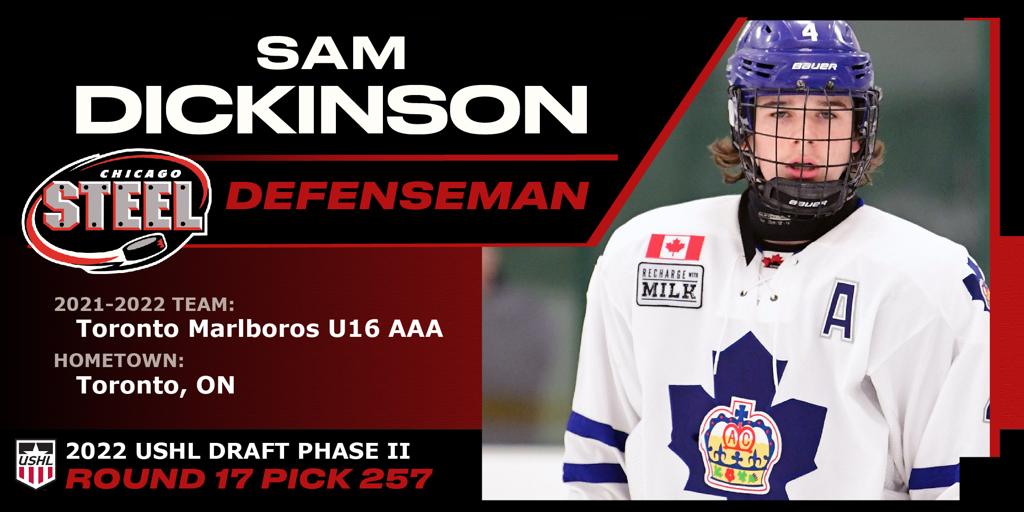 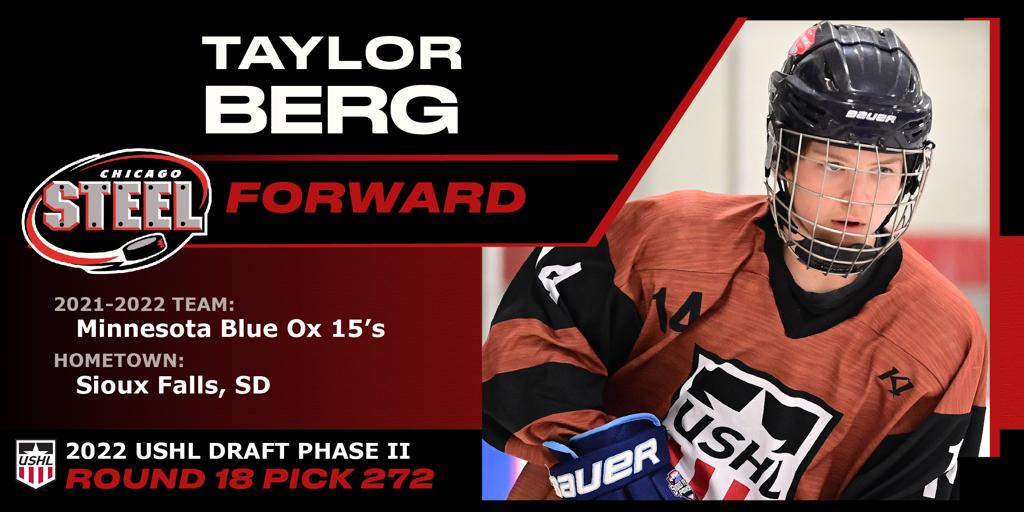 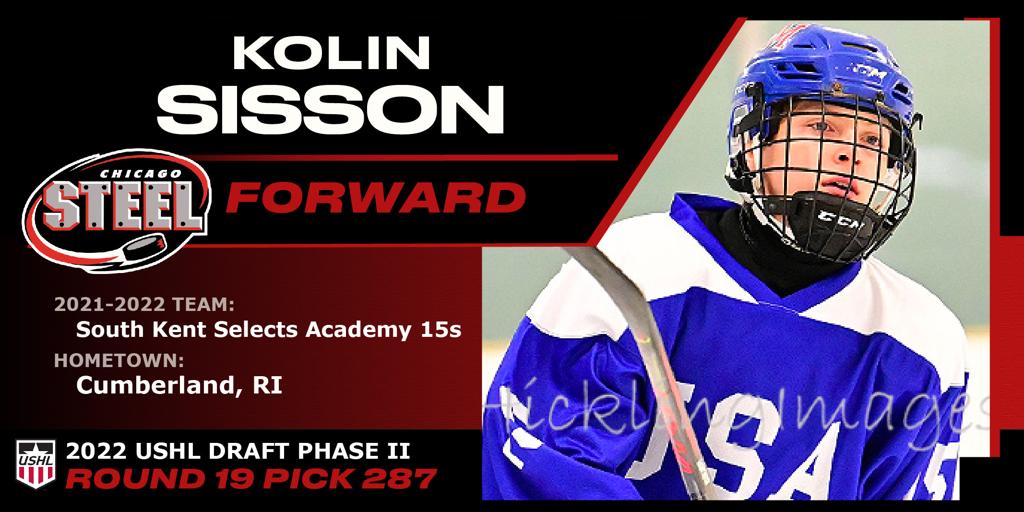 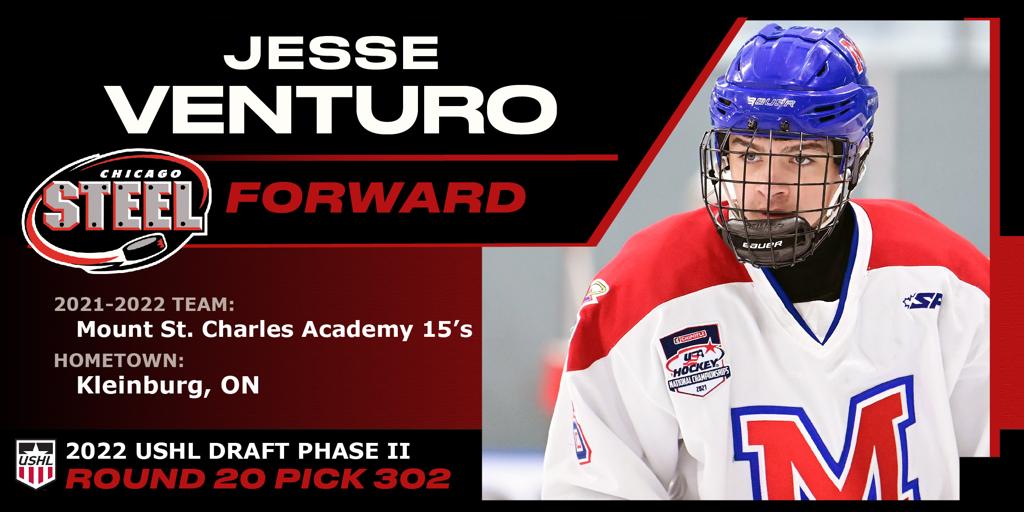 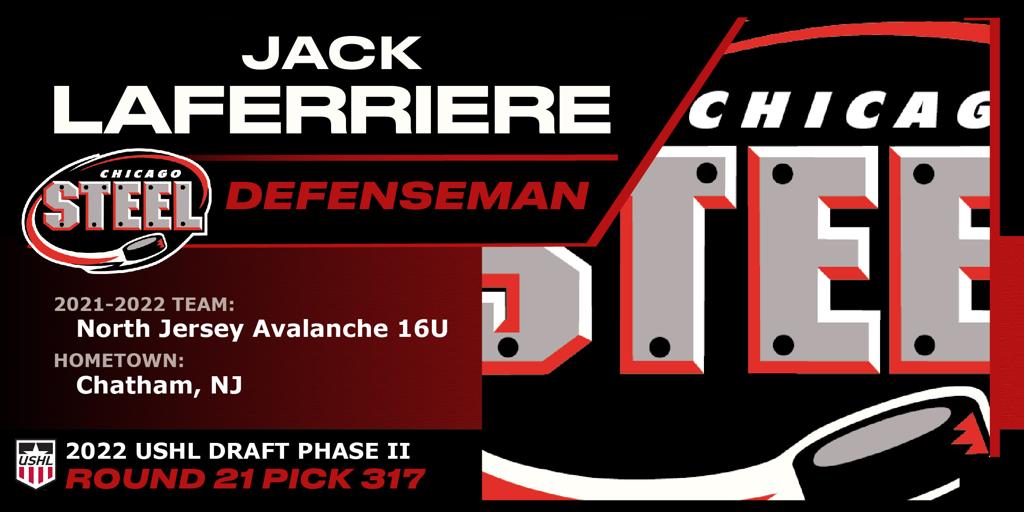 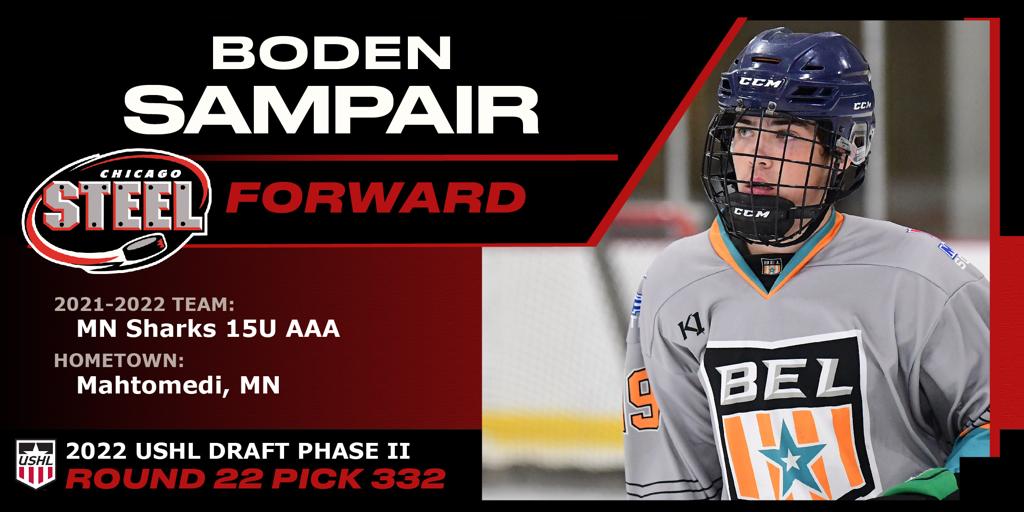 Steel General Manager Mike Garman and Steel Associate General Manager Noëlle Needham, assisted throughout the year by the Chicago scouting staff around the world, selected 11 forwards and six defenseman, following a successful first phase of the draft on Monday.

“We’re thrilled to add so many great players to our organization,” said Garman. “All the credit goes to our scouting staff and all their hard work this season to identify top-end talent and be able to add them throughout the draft. We could not be more excited about the group we have coming in and can’t wait for next season.”

Isaac Gordon, a forward from Landmark, Manitoba, was the first player off the board in Phase II for Chicago, chosen in the fifth round, #64 overall. The 5-foot-10, 181-pound skater registered 72 points (43G, 29A) over 41 games for Eastman Selects U18 AAA, leading his club in goals and points during the 2021-2022 season. Gordon was named to the MU18HL Second All-Star Team.

Trey Fechko was chosen in the seventh round, #107 overall, after his season with Edina High School in Minnesota where he amassed 42 points (21G, 21A) in 28 contests, leading the Hornets in goals and points. The Eden Prairie, Minn., native is committed to Arizona State University.

The Steel went to the defensive side of the puck in the eighth round, choosing Nolan Joyce with the #116 overall selection. A 6-foot-tall, 181-pound blueliner, Joyce paced St. Sebastian’s Prep School (MA) blueliners with 14 goals and 24 helpers in 25 games played during the 2021-2022 campaign. Joyce is committed to Boston College.

Another defenseman, Leo Eperjesi, was chosen by Chicago with the club’s ninth round pick at #137 overall. Hailing from Kosice, Slovakia, the 6-foot-3, 185-pound blueliner appeared in 19 games for HC Kosice U20 during the 2021-2022 season, accounting for eight points (4G, 4A). In two playoff games, Eperjesi netted one goal.

Chicago chose a third consecutive defenseman, Owen Phillips, with the #152 overall pick in the 10th round. Phillips, a native of Hammonds Plains, Nova Scotia, played the 2021-2022 season with the Pittsburgh Penguins Elite where he totaled 38 points (6G, 32A) in 55 games for the 15U AAA club.

Jeremy Leroux, a forward from Mirabel, Quebec, was selected in the 11th round, #167 overall after potting 23 goals and adding 25 helpers in 39 games for Stanstead College Varsity in Quebec.

Brady Arneson, a Red Wing, Minn., native, was next off the board for Chicago with the #182 overall pick in the 12th round. Committed to the University of Maine, the 5-foot-10, 157-pound forward totaled 36 points (17G, 19A) for Sioux Falls Power 16U AAA this past season.

The Steel made another addition to the club’s forward depth in the 13th round, #197 overall, with the selection of Ryder Ritchie, a 5-foot-10, 146-pound skater from Calgary, Alberta. Ritchie played for Rink Hockey Academy Kelowna U18 where he totaled 31 points (11G, 20A) in 23 games.

Chicago added forward Kade Kohanski from Hermantown High (MN) with the #212 overall selection in the 14th round. Kohanski ranked second on the team with 22 goals during the 2021-2022 season, just two goals shy of current Steel forward Zam Plante, as he helped lead the Hawks to a Minnesota state championship this season.

Lucas Buzziol rounded out the run of six consecutive forwards chose by Chicago as the #242 overall pick in the 16th round. Buzziol played for the Milton Menace of the OJHL with 49 points (20G, 29A) across 51 games before adding a marker and three helpers in seven playoff games. The Mississauga, Ontario, native measures in at 5-foot-10, 179-pounds.

The next defenseman chose by Chicago was Sam Dickinson, a 6-foot-2, 194-pound blueliner from Toronto, Ontario. Playing for the Toronto Marlboros of the GTHL in 2021-2022, Dickinson registered 34 assists to lead his team’s defensemen in addition to five markers in 46 games.

Taylor Berg was selected by Chicago in the 18th round with the #272 overall pick. The forward tallied 35 points (15G, 20A) in 27 games played for Northern Lakes High (MN) this season.

Chicago added to the forward corps with the club’s 19th round pick, #287 overall, forward Kolin Sisson from Cumberland, R.I. Playing for Selects Academy 15U AAA during the 2021-2022 season, Sisson registered 47 points (21G, 26) in 45 games, ranking third on his team.

Jesse Venturo was taken off the board by the Steel with the #302 overall selection in the 20th round. The Kleinburg, Ontario-born forward skated for Mount St. Charles Academy 15U where he totaled 17 points (8G, 9A) through 15 outings.

The final defenseman chosen by Chicago was Jack Laferriere, a 6-foot-1, 165-pound blueliner from Chatham, N.J. The brother of former Des Moines Buccaneer Alex Laferriere, Jack split time between the North Jersey Avalanche 16U club where he recorded two markers and six helpers over 24 games and Seton Hall Prep (NJ) where he picked up a goal and nine helpers during the 2021-2022 season.

Rounding out Phase II of the 2022 USHL Draft was forward Boden Sampair from Mahtomedi, Minn. The 5-foot-7, 154-pound skater factored in for seven goals and four assists for the MN Sharks 15U AAA in 2021-2022.