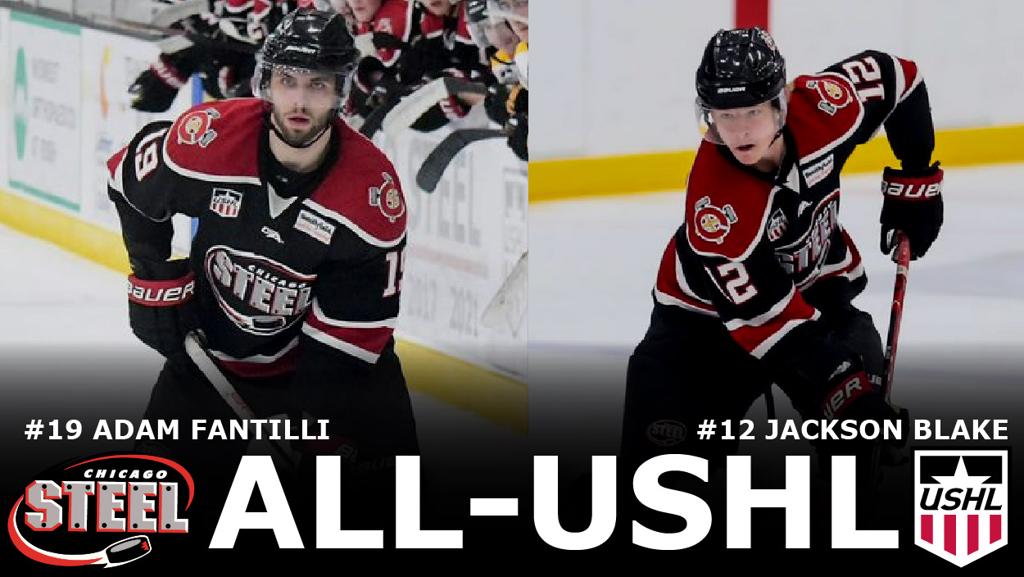 “Adam is very deserving of this First Team selection and we are proud of his development as a player, and as a person over the last two seasons,” said Steel head coach Brock Sheahan. “We have been so lucky to have such a quality person and amazing talent as a part of our group the last two seasons.

“We are very thankful to have had the opportunity to be a part of his path, and the sky is the limit for him moving forward. We are excited to see him realize his hockey dreams in the coming years and know that he has the tools to continue to push and get better every day.”

Fantilli, a top prospect for the 2023 NHL Draft, led the Steel and ranked third in the USHL with 37 goals over 54 games played for the Steel during the 2021-2022 regular season, the second-most in a single season in franchise history. The University of Michigan commit added 37 helpers, totaling 74 points which ranked second-most on the club this year.

Blake, a University of North Dakota commit and Fourth Round (#109 Overall) selection of the Carolina Hurricanes in the 2021 NHL Draft, led Chicago with 77 points (27G, 50A) in 61 games. With 50 helpers this year, Blake tied for the third-most assists in a single season in Steel franchise history and ranks fifth all-time for points in a single season.

“Jackson is a dynamic player and might be the most talented offensive player in the USHL,” said Sheahan. “He is very deserving of this selection, and we couldn’t be prouder of the steps that Jackson took over the last two years and his growth and maturity as a person. His game has grown so much, especially his commitment to being a complete player. Jackson was so much fun to coach, and we are looking forward to watching him have continued success as he moves on to college and beyond.”

The Steel have begun preparations for next season and will host their 2022 Tryout/Development Camp June 10 through June 13 at Fox Valley Ice Arena.  All camp games are open to the public and will be streamed on HockeyTV.  In conjunction with the camp, the Steel are hosting an apparel sale with discounted merchandise and team-issued apparel.