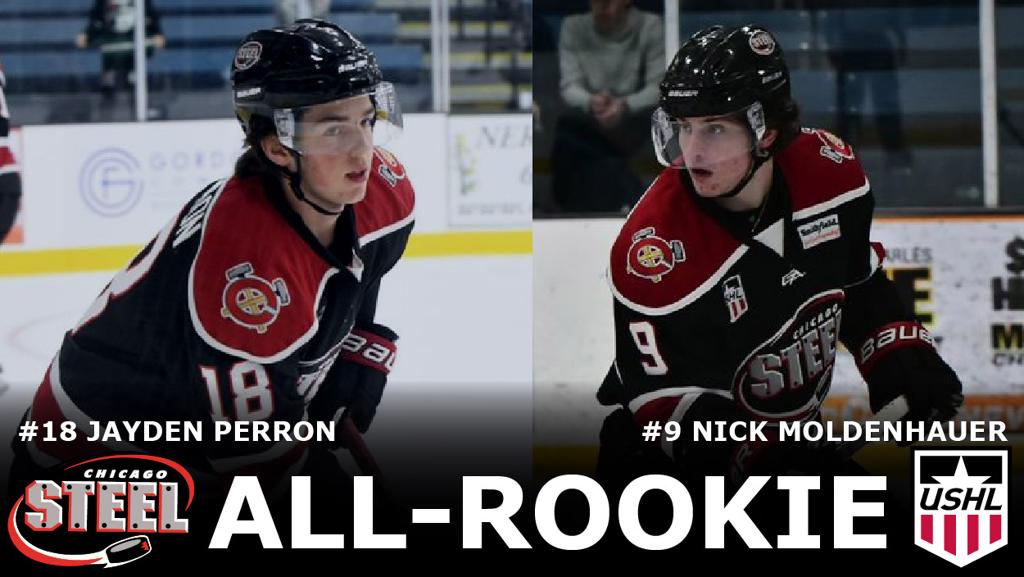 Forwards Nick Moldenhauer and Jayden Perron were both named to the All-Rookie Second Team, extending Chicago’s current streak to six consecutive seasons with at least one player named as a USHL All-Rookie selection.

Despite playing only 41 games during the 2021-2022 season due to an early-season injury, Moldenhauer notched 43 points (18G, 25A), finishing as one of only two USHL rookies to average over a point-per-game with at least 10 games played. The Mississauga, Ontario, native finished the regular season on a streak of five consecutive multi-point performances with points in 11 of his last 14 outings. A 5-foot-11, 175-pound forward, Moldenhauer charted four multi-goal efforts in his rookie season for Chicago.

“The adversity that Nick overcame this season was very impressive, especially for a player in their first season in the USHL and draft year,” said Steel head coach Brock Sheahan. “Nick is a special player and person and is very deserving of this selection. He is everything that we want in a Steel Hockey player - talented, smart, competitive and a person of high character. We are proud of the steps Nick took this season and can’t wait for him to continue his process with us next year. He is someone we will rely on day-in and day-out to show our young players the Steel way.”

Perron, signed to a tender agreement by Chicago prior to the 2021-2022 regular season, completed his 16-year-old season as the sixth-highest scoring rookie in the USHL with 45 points (17G, 28A) through 60 games played. Originally from Winnipeg, Manitoba, Perron’s season included a four-point game with a goal and three helpers in an 8-4 victory over the Youngstown Phantoms on November 26, 2021, as well as nine additional multi-point games.

“Jayden had an exceptional season in his first year in the league as a 2005 birth year player,” said Sheahan. “His talent level is undeniable but more importantly, he is an elite person and an absolute pleasure to coach. He pushes not only himself, but his teammates to get better every day with his approach and we are so lucky to have him as part of the Steel family. Jayden got better every day and is very deserving of this honor. We know that his development will continue at a high rate next season here in Chicago, and he has a bright future in the game of hockey.”

The Steel have begun preparations for next season and will host their 2022 Tryout/Development Camp June 10 through June 13 at Fox Valley Ice Arena.  All camp games are open to the public and will be streamed on HockeyTV.  In conjunction with the camp, the Steel are hosting an apparel sale with discounted merchandise and team-issued apparel.