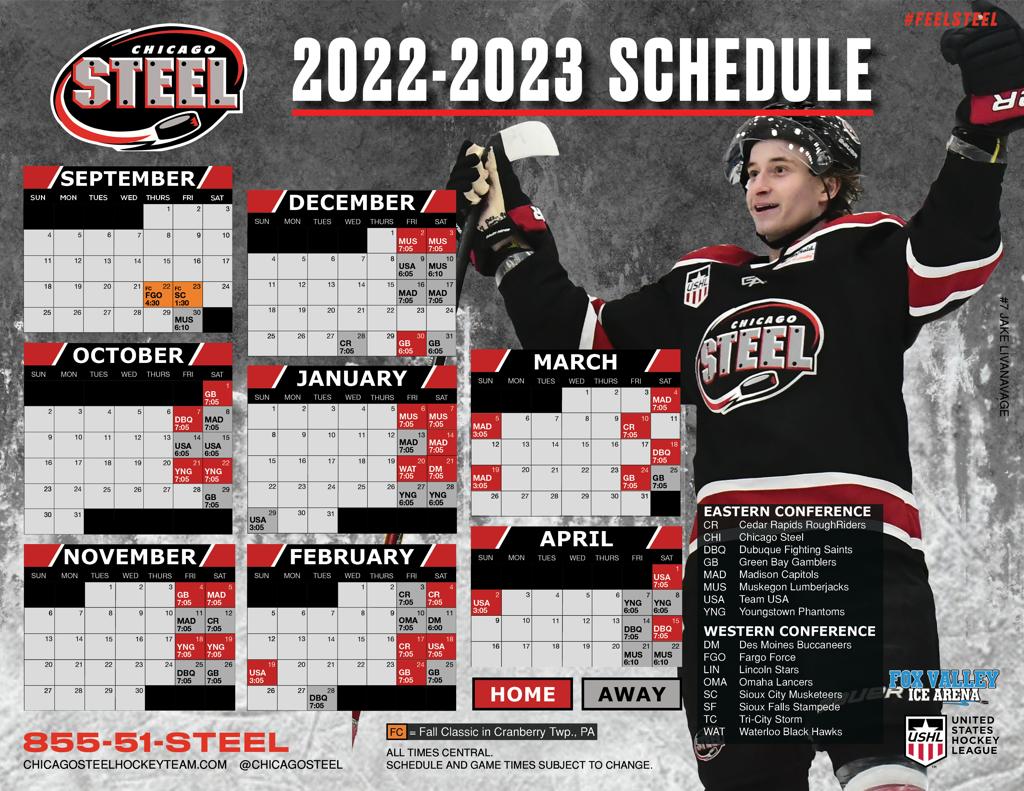 The Steel kick off the regular season slate with matchups against Western Conference opponents at the DICKS Sporting Goods USHL Fall Classic in Cranberry Township, Penn., in September. Chicago squares off against the Fargo Force on Thursday, Sep. 22 and takes on the defending Clark Cup Champion Sioux City Musketeers on Friday, Sep. 23 at UPMC Lemieux Sports Complex.

The club travels to Michigan for a matchup against the Muskegon Lumberjacks on Friday, Sep. 30 before Chicago’s home opener at Fox Valley Ice Arena on Saturday, Oct. 1 at 7:05 pm CT against the Green Bay Gamblers.

Chicago faces off against Green Bay a total of 10 times during the season, tied for the most common matchup between for the Steel as well as 10 contests against the defending Eastern Conference Champion Madison Capitols, who eliminated the Steel from the 2022 Clark Cup Playoffs with a 2-1 series victory in the best-of-three Eastern Conference Semifinals.

The season’s first rematch against Madison is a clash in Wisconsin on Saturday, Oct. 8 while the first game on home ice versus the Capitols is on Saturday, Nov. 5 at 7:05 pm CT.

Chicago’s popular Sunday afternoon puck drops return during the 2022-2023 regular season with four chances to see hockey as a matinee. Starting with a faceoff against Team USA (U17) on Sunday, Feb. 19, the Steel schedule includes 3:05 pm CT start times against Madison on Sunday, March 5 and Sunday, March 19 as well as a date with Team USA (U18) on Sunday, April 2.

Prior to the Sunday afternoon game on April 2, the Steel and Team USA (U18) drop the puck on Saturday, April 1 at 7:05 pm CT as the top two junior programs in the world for producing NHL Draft picks over the last two NHL Drafts engage in a two-game weekend series.

Rounding out the Eastern Conference matchups throughout the year, the Steel see the Youngstown Phantoms eight times with four contests at home (Oct. 21, 22; Nov. 18, 19). Both the Cedar Rapids RoughRiders and Dubuque Fighting Saints are slated for six contests against the Steel while Team USA (U17) plays five times against Chicago.

In the coming weeks, the Steel will announce additional ticketing details including on sale dates for groups, suites and single-game tickets, as well as a full promotional schedule for the 2022-2023 season.