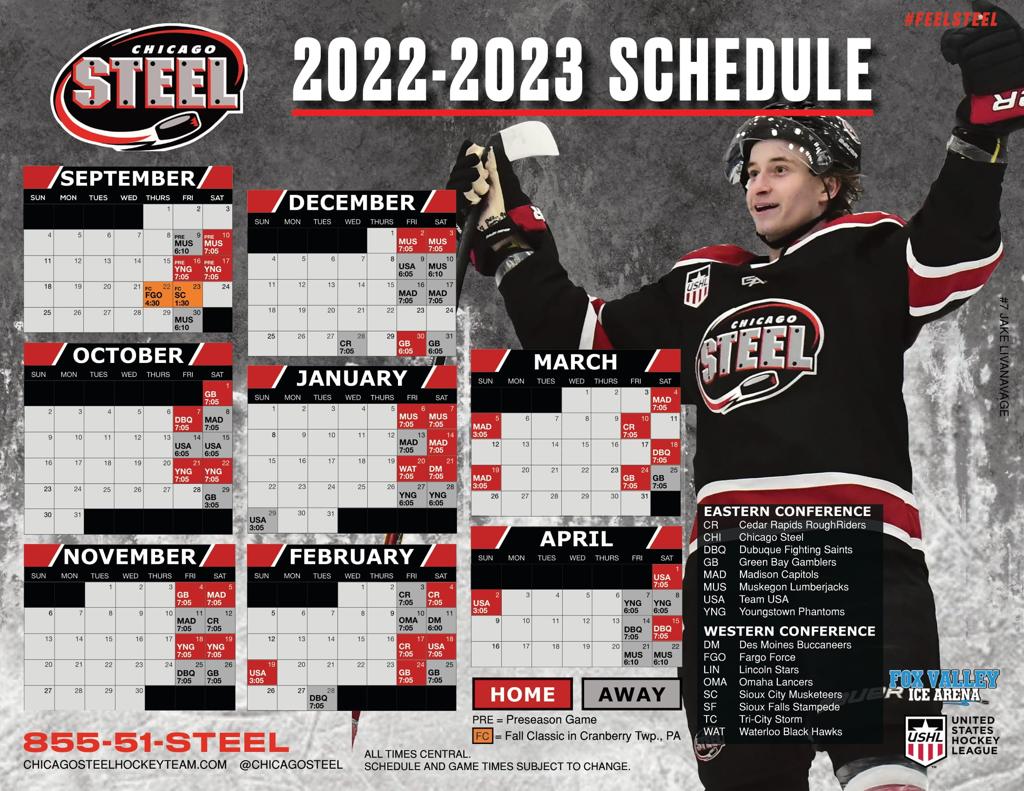 GENEVA, ILLINOIS — The Chicago Steel announced today the club’s preseason schedule with three of the four games to be played at Fox Valley Ice Arena.

The Steel take to the road for a game against the Muskegon Lumberjacks at Mercy Health Arena in Michigan on Friday, Sept. 9 at 6:10 pm CT before taking the ice at Fox Valley Ice Arena on Saturday, Sept. 10 at 7:05 pm CT, the first chance for Steel fans to see the club in action on home ice entering the 2022-2023 slate.

A season ago, the Steel owned a 6-0-3-0 record in nine head-to-head matchups against Muskegon with seven of those contests decided by two or fewer goals.

Chicago concludes the preseason by hosting a pair of matchups against the Youngstown Phantoms on Friday, Sept. 16 and Saturday, Sept. 17 at 7:05 pm CT at Fox Valley Ice Arena.

The Steel and Phantoms split an eight-game regular season series in 2021-2022 with Chicago totaling a 4-4-0-0 mark versus the Eastern Conference foes.

Single-game tickets for all preseason and regular season home games will be available to purchase starting at 10:00 am CT on Friday, August 19.

After the Steel wrap up the four-game exhibition schedule, the club will travel to Cranberry Township, Penn., for the 2022 DICK’S Sporting Goods USHL Fall Classic at UPMC Lemieux Sports Complex.

Chicago opens the regular season at the Fall Classic against two Western Conference foes, facing off against the Fargo Force on Thursday, Sept. 22 at 4:30 pm CT and finishing the showcase with a 1:30 pm CT puck drop against the defending Clark Cup Champions, the Sioux City Musketeers, on Friday, Sept. 23.

The Steel are set to open the 2022-2023 home slate on Saturday, October 1 at 7:05 pm CT against the Green Bay Gamblers, following a road matchup against Muskegon on Friday, September 30.

Season Ticket Plans as well as Group Tickets and Experiences are on sale now by calling 855-51-STEEL.