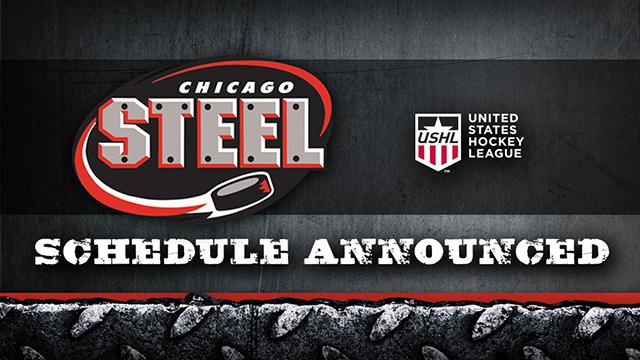 Fans will have a great chance to catch the Steel early in the season as the team plays at home each of the first eight weekends of the season, including five straight Saturday night games to start the year. It all begins with Opening Night on Saturday, Sept. 24 against the Green Bay Gamblers. Puck drop is set for 7:05 p.m. CDT. The first 500 kids (14 and under) in attendance will receive a complimentary Steel replica youth jersey. Including Opening Night, the team will be home each of the first five Saturday nights of the season.

Chicago’s I-55 rivalry with the Bloomington Thunder will be renewed early and often this season, as the teams will face off a total of three times in the first three weeks of the season, including twice at U.S. Cellular Coliseum in Bloomington. The Steel welcome the Thunder to Geneva three times, the first scheduled for Saturday, Oct. 8. Another October highlight is a pre-Halloween home game on Friday, Oct. 28 against Cedar Rapids.

On Friday, Nov. 4, the Steel and USHL will welcome participants in Chicago for the Bauer World Invite hockey tournament as part of the Steel’s home game vs. Des Moines, the first of five home games in the month of November. The Steel will host two Thanksgiving weekend home games as they square off with Lincoln and Dubuque, respectively, on Friday and Saturday, Nov. 25 and 26.

December includes several prime home games around the holidays. The Steel will host the Fargo Force for a weekend set Dec. 9-10 in the Force’s first-ever visit to the Fox Valley. Unlike last season, when the Steel had over a month around the holidays without a home game, the team will host Bloomington on Friday, Dec. 16, and a big Dec. 30 showdown with Green Bay.

A season-high, eight-game homestand will take place between Jan. 14 and Feb. 4, including four-straight two-game weekends. Saturday, Jan. 21 marks the first visit to Fox Valley Ice Arena for Team USA’s U18 squad. Following the homestand, the Steel will hit the road for 14 of its final 21 games of the season, starting with the first visit of the season to Western Conference foes when Chicago travels to Sioux City and Sioux Falls on Feb. 10-11.

After a St. Patrick’s Day matchup with Sioux Falls on Friday, Mar. 17, seven of the team’s final nine games will be played on the road. The final home game of the regular season, a Friday, April 7 contest against Muskegon, will take place on the off-day of the Frozen Four, when the 2017 NCAA Division I Men’s Ice Hockey Championship takes place at the United Center in Chicago.

“We’re pleased with how the schedule came out for us this season,” said Steel President Dan Lehv. “With multiple home games around holiday time, and all home games to be played on Fridays, Saturdays and Sundays, things are shaping up for an exciting for the Steel and our fans.”

Chicago will face off against each of the 16 other teams in the USHL. The only team not traveling to Geneva this season is the 2016 Clark Cup Champions, the Tri-City Storm, who the Steel will visit for a two-game set on March 31 and April 1. Chicago will play just two three-in-three weekends (Feb. 17-19 and March 24-26) this season, compared to a grueling five three-in-three weekends in 2015-2016.

Group and suite tickets will go on sale shortly, and the Steel will soon announce its public on-sale date for 2016-2017 single game tickets.