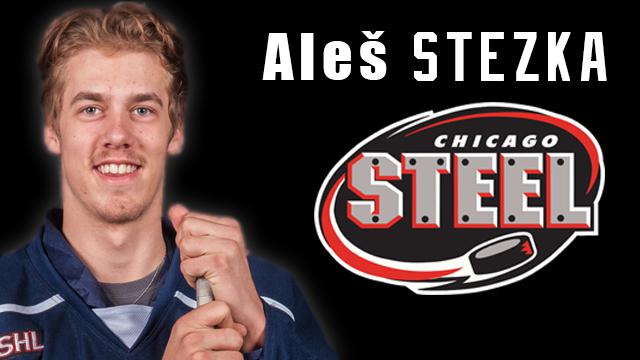 GENEVA, ILLINOIS – The Chicago Steel announced Monday the acquisition of goaltender Ales Stezka from the Sioux Falls Stampede in exchange for goaltender Lukas Kania and future considerations. Stezka, 19, was a fourth-round selection (111th overall) of the Minnesota Wild in the 2015 NHL Draft.

Stezka joins the Steel following the departure of fellow Czech netminder Daniel Vladar, who was signed by the Boston Bruins in April, as well as John Lethemon, who will begin his collegiate career at Michigan State University this fall.

“Ales brings veteran leadership to our net for this upcoming season,” said Steel General Manager Ryan Bennett. “He’s a big butterfly goaltender with international experience. We’re excited to have him on our roster.”

A native of Liberec, Czech Republic, Stezka brings some significant size to the Chicago crease, standing 6-foot-4. In 2015-2016, his first season in North America, Stezka appeared in 19 games for the Stampede, registering a 6-10-1-0 record, including one shutout, with a 3.32 GAA and .893 save percentage. He also appeared in one game for the Czech Republic at the 2016 World Junior Championship in Helsinki, Finland.

Kania, 20, joins Sioux Falls for his final junior season. The Chicago native played last year for the Minnesota Wilderness (NAHL) and is committed to Brown University. He was originally drafted by the Steel in 2013 and was added to the roster following last month’s Tryout Camp.