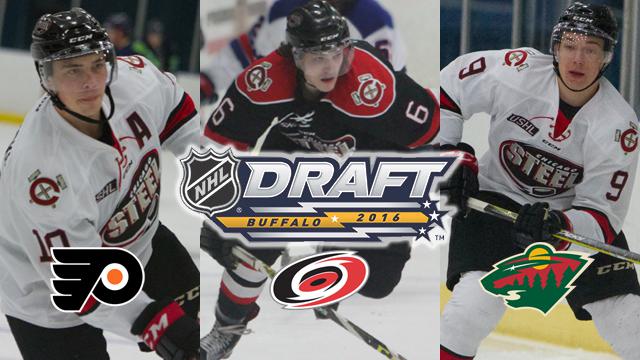 BUFFALO, NEW YORK – Chicago Steel forward Max Zimmer was selected Saturday by the Carolina Hurricanes in the fourth round (104th overall) at the 2016 NHL Draft at First Niagara Center. Additionally, two forwards who spent the majority of the 2015-2016 season with the Steel were picked, as the Minnesota Wild took Brandon Duhaime two spots after Zimmer (106th overall), and Tanner Laczynski was chosen by the Philadelphia Flyers in the sixth round (169th overall).

“It’s a dream come true,” Zimmer said about hearing his name called by the Hurricanes on Saturday. “I was obviously very happy, and now the real work starts to try to prove myself.”

Zimmer appeared in 55 games for the Steel in 2015-2016, recording 16 goals and 21 assists in his first full USHL season. In December, the Wayzata, Minn. native led the U.S. Select Team at the World Junior A Challenge, placing first in tournament with 5 goals. He also played in January’s 2016 USHL/NHL Top Prospects Game. Zimmer is expected to begin his NCAA Division I hockey career this fall with the University of Wisconsin Badgers (Big Ten).

“We are thrilled for Max,” said Steel Head Coach Dan Muse. “He worked very hard this past season and showed tremendous growth throughout the year. It is great to see that all his hard work was recognized. We are excited to watch Max as he enters the next chapter of his career.”

Zimmer, 18, follows in the footsteps of former Steel captain Jaccob Slavin, a fourth-round selection of the Hurricanes in 2012 who just completed his rookie NHL campaign. Steel alumnus Brendan Woods was also selected by the Hurricanes in 2012, and like Zimmer plans to do, transitioned from junior hockey in Chicago to college hockey at Wisconsin.

Duhaime tallied 10 goals and 22 assists for the Steel prior to a Feb. 6 trade with Tri-City, where he won a Clark Cup title last month. The 19-year-old Parkland, Fla. native is committed to Providence College (Hockey East).

Laczynski, 19, notched 31 goals and 55 assists in 92 games played for Chicago over the course of three seasons, placing him in the top 10 for career points in franchise history. Before being traded to Lincoln on Feb. 2, the Shorewood, Ill. native served as an alternate captain for the Steel. Laczynski is committed to Ohio State University (Big Ten).

In addition to Zimmer, Duhaime and Laczynski, 42 other players with USHL experience were selected at the Draft. 10 of those picks occurred in the first round, highlighted by No. 1 selection Auston Matthews (Toronto Maple Leafs).